Ford’s ending production of its latest GT with a track-only variant. 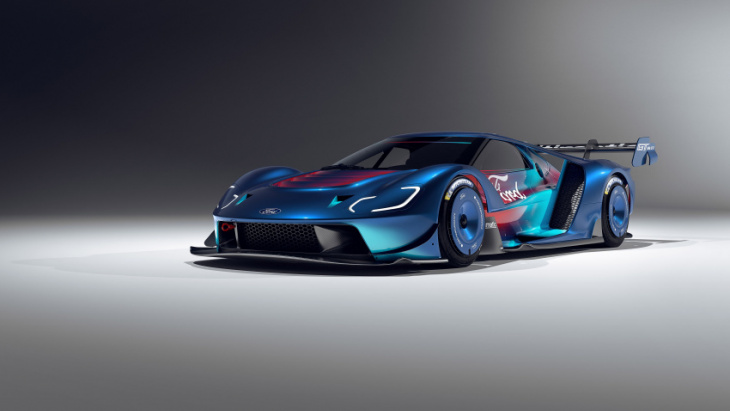 Ford’s latest supercar is ending production, and we’ve already talked about the final road-going model. Well, the truly final examples of the Ford GT aren’t even slated for road use and are honoring one of the most important Ford cars to race under the blue oval. Dubbed the Ford GT Mk IV, this track-only model pays homage to the Ford GT40 of the same name. Taking inspiration from the ’67 Le Mans-winning race car, Ford engineers threw everything they had at the final GT.

Ford isn’t clear about the details of the GT Mk IV, but the company does note significant changes to this special model. Ford says it has a bespoke EcoBoost engine that makes over 800 hp and displaces more than 3.5 liters. This power heads to the rear wheels via, as the company calls it, a race transmission. Both of these are major departures from the previous track-only Ford GT Mk II.

It would be easy enough to stuff this new powertrain hardware into the same shell that Ford has used for the entire GT Run. This would still make it the most interesting GT, and it would usurp the track-only Mk II models that sit atop the GT throne. Instead, Ford decided to stretch the GT’s body and wheelbase for this Mk IV. Effectively a long-tail Ford GT, this stretched machine should be more capable on track and work better with the revised aero package.

There’s a premium for all this. If you recall, Ford advertised its track-only Mk II models for the princely sum of $1.2 million. Well, the more powerful, longer Ford GT IV will set you back at least $1.7 million, if you’re one of the lucky 67 that get approved to purchase one. Even then, you can probably crank that base price up with a few customization requests.

There is some good news for those lucky 67. Ford says these will start hitting customers in the spring of 2023. That means the sleek, new machine could hit your collection just in time to spend all summer thrashing it on track.

Keyword: The Final Ford GT Isn’t Road Legal but Has over 800 HP