A control that’s been a feature of cars for decades is rapidly disappearing from the latest models, according to a new market review.

It found that only 13 per cent of motors in UK showrooms today come with a manual handbrake, which is set to become a forgotten component in vehicles before the end of the decade.

The majority of the remaining 87 per cent of new cars have electronic parking brakes, which experts warn are far more expensive to fix if they go wrong – an average of £446 pricier, in fact. 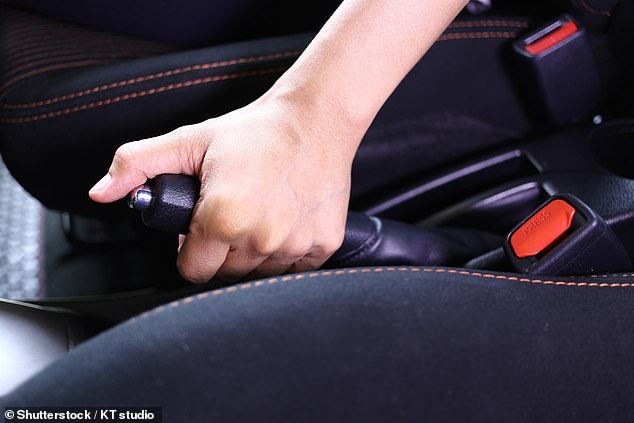 Putting the brakes on a car part: Just 13% of all new car models sold in the UK are fitted with a manual handbrake as brands continue to switch to electronic systems

The report is the fifth annual review of how many cars are being sold with handbrakes, with the numbers consistently dropping year-on-year over the half decade.

In 2018, CarGurus – the online used car platform – found that more than a third (37 per cent) of models across brand ranges had a manual handbrake.

Yet the 2022 review shows there is no slowdown in how quickly the part is being omitted from cars by brands.

It found that household names, including giants BMW and Peugeot, have dropped handbrakes from their current cars all together over the last 12 months.

Of the 38 manufacturers reviewed, 17 no longer sell cars with manual handbrakes – that’s 45 per cent of brands, the report found. 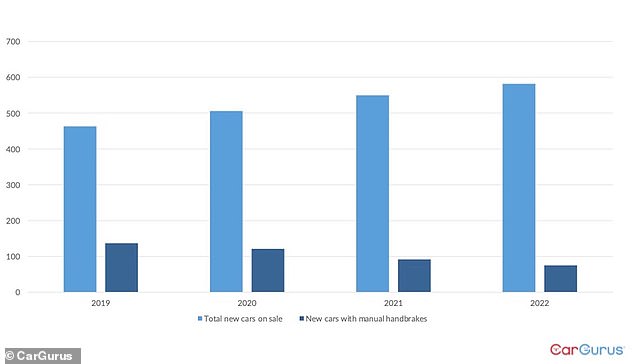 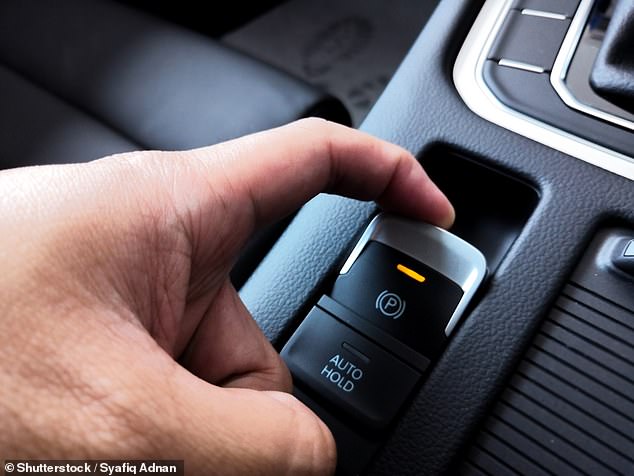 While electronic parking brakes offer easier operation to motorists and adjust automatically, they are far more expensive to repair than traditional handbrakes if something goes wrong

The BMW X1, M230i xDrive Coupe and M4 Convertible have all now been fitted with an electronic parking brake, while Peugeot has discontinued its only manual-handbrake product, the 108 city car.

In addition, the Citroen C1 and Nissan Micra, both of which featured a manual handbrake, have been discontinued in the UK in the last 12 months, the report highlighted.

Meanwhile, Audi continues to offer a manual handbrake in just 1 per cent of its models, while Vauxhall has dropped over two in five (40 per cent) of its manual handbrake vehicles, with models such as the Combo Life and Vivaro Life facing an electric facelift in 2022 and a switch to electronic parking brakes.

The only manufacturer to offer manual handbrakes across its product portfolio in the UK is Abarth, though an electric Abarth 500 – based on the Fiat 500 electric – is set to be unveiled this week and will not have a handbrake.

Some brands, including Mercedes, also offer parking foot brakes, which are operated by an additional lever in the pedal box – though these are becoming very rare.

This table shows how many models each manufacturer sells with a manual handbrake. Giant brands BMW and Peugeot, have both dropped them from their cars in the last 12 months

While electronic parking brakes offer easier operation to motorists – activating with the push of a button and releasing automatically when the driver presses the accelerator – and adjust themselves, they are far more expensive to repair than traditional handbrakes if something goes wrong.

We asked warranty provider MotorEasy to tell us the average price difference. While fixing a manual handbrake cost on average £220 over the previous five years, the average garage receipt for fixing a faulty electronic parking brake was £666 – a difference of £446.

MotorEasy’s extended warranty data also shows that over a quarter (27 per cent) of electronic parking brake claims cost over £1,000 to resolve, compared to 18 per cent of manual handbrake claims.

The costliest repair on its record was a bill for £2,889 to fix the electronic parking brake system on a Range Rover Sport.

It added that Land Rover was the brand most commonly suffering from parking brake issues, followed by BMW.

And electronic parking brake issues are not what you’d call rare.

In the same year, Tesla also issued a voluntary recall of 53,000 Model S and Model X vehicles worldwide due to a parking brake fault, while Audi, Renault and Toyota have all also had to recall models for similar issues with their electronic parking systems in the past.

While CarGurus has previously predicted that the manual handbrake will survive only until 2030.

With new petrol and diesel cars banned from that date, only fully-electric vehicles – and some hybrids – will be allowed to be sold in Britain. All of these will have electronic parking brakes.

Yet the online platform says the current rate at which handbrakes are being deleted from model ranges by manufacturers means the traditional interior part might not make it to the end of the decade.

Chris Knapman, editor at CarGurus UK, said: ‘The fifth instalment of our Manual Handbrake Report shows the number of new models featuring a traditional handbrake has continued to fall.

‘The discontinuation of some well-known models, along with the increasing prevalence of EVs, has contributed to the 4 per cent drop over the last 12 months.’

He adds: ‘Since 2018, we have seen a fall of 24 per cent in the number of new cars being fitted with a manual handbrake.

‘It was always likely that the expected 2030 ban in sales of new petrol and diesel cars would spell the end of the manual handbrake – the question now is whether it can even last until then.’

Keyword: The car part set to disappear from motors by the end of the decade