The bold plan to create the great Australian electric ute 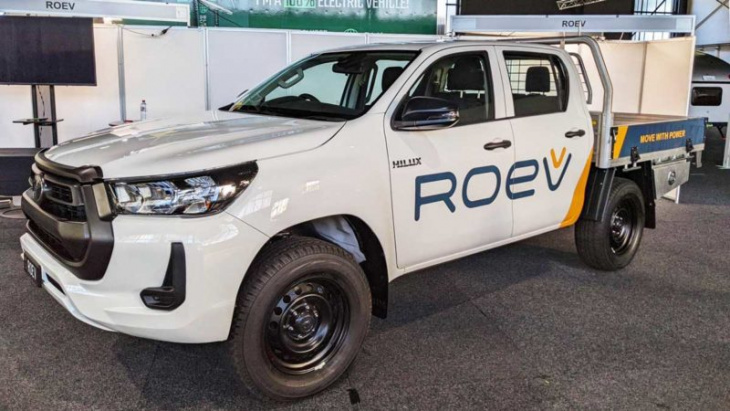 Do electric utes exist? Climate and energy minister Chris Bowen proved that they do with a photo and a test drive in a Ford F150 Lightning electric pick up during a recent visit to the US.

In Australia, electric utes do exist, but only in small numbers in locations such as underground mines, where they are seen as a good and safe alternative to diesel burners.

Roev is the brainchild of Noah Wasmer, Paul Slade and Robert Deist, who walked away from highly rewarding jobs at tech sensation Atlassian to pursue their vision of a “power wall on wheels”.

That means their journey is not just about building electric utes, it is also about turning them into something useful to the grid and the people who own them.

The first part of their plan it to set up production facilities that can convert 1,000 fossil fuel utes in a single year into electric drivetrains, complete with vehicle to grid technology.

The plan is to focus on a specific brand with a solid chassis – such as the Toyota Hilux – and design a system where it might take four hours to rip out the motor, the fuel tank, and exhaust system, and then take another four hours to replace it with a new electric motor, drivetrains and battery storage.

“We want scale,” Wasmer says in an interview for the latest episode of The Driven podcast. “Scale is the absolute game changer, and is what helps us that reduce the cost dramatically from traditional conversions.”

“We think we can deliver electric ute options that can meet 80 to 90 per cent of the use cases for fleets,” he says. Wasmer hopes to begin this production within the next six to eight months.

Once Roev has completed orders for an electric Hilux conversion, it will move on to other ute models that can be scalable. Wasmer is currently thinking along the lines of a Ford Ranger,

What’s even more exciting is the prospect that Roev could start creating an Australia-made electric ute – from the ground up – within the next three to five years. And to do that, it hopes to tap into the “DNA” of the car manufacturing industry that lingers after the dramatic shutdowns of the last few years.

“We see a need to urgently unlock the supply of electric utes in this country, and through any means possible,” Wasmer says.

“Are there ways that we can manufacture electric utes all the way from from scratch? We’ve already started the process of that design of that of an Australian ute.

“We have a very clear line of sight that we can do this incredibly cost efficiently. But we’re taking these necessary steps now to really to help customers understand who we are, and to start building high quality products, and really evolve over time into what we call a 100 year company of developing great products for Australia.”

Please click here to hear the full interview with Noah Wasmer on this week’s episode of The Driven podcast.