The Aston Martin DBS Is Brilliant, When It Works

A mountain drive in the DBS is a brilliant experience, right up until it isn’t. 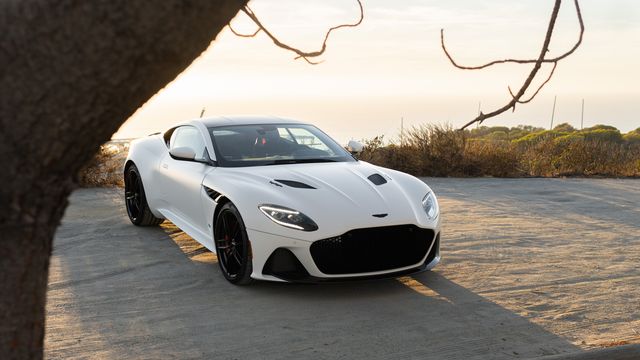 Palomar Mountain Road is a car killer. It contains 32 corners packed tightly into a 6-mile stretch of tarmac. The road climbs steeply to an observatory that contains what was once the world’s largest telescope, with a stunning view near its apex. At its midpoint, my hands gripped the rounded-square wheel of an Aston Martin DBS. V-12 noises rocketed off rock faces, San Diego spread out below me, and the Pacific bordered the vista. Everything was perfect. Then the brakes went soft.

Like I said, Palomar Mountain Road is a car killer.

I pulled off into a turnout and cracked the door to the smell of cooked carbon-ceramics. Releasing all 715 horses between hairpins can do that. As I got out, the Aston flashed a coolant temperature warning. The needle was pegged in the red. 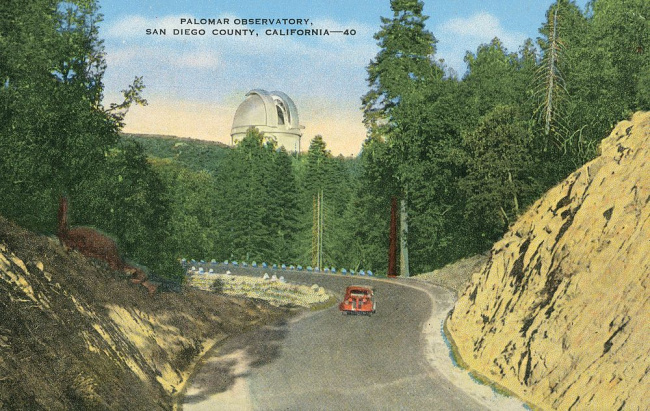 An illustration of a car driving up Palomar Mountain Road in 1930. 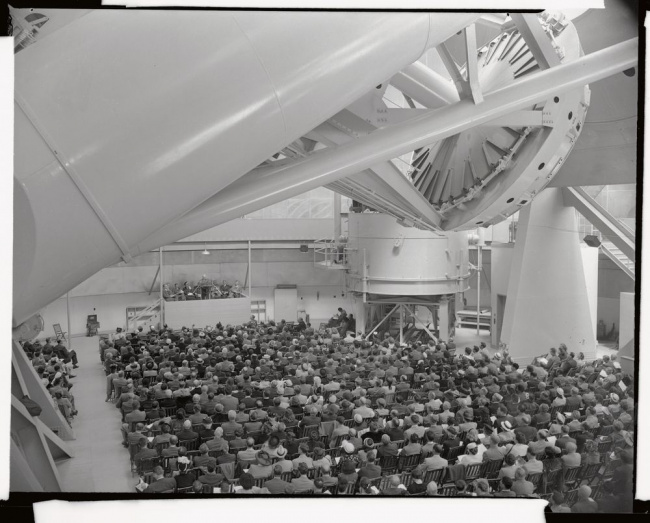 The dedication of the Hale Telescope at Palomar Mountain Observatory in 1948. At the time, it was the world’s largest telescope.

I jumped back in the car, anxious to get cool mountain air moving through its radiators and vented discs. I flashed a panicked look to motorsports editor Fred Smith, who was riding right seat and anxiously awaiting his turn to drive. By the time I looked back at the gauges, the coolant temperature reading was completely normal. Some thirty seconds after the bright warning, the Aston’s digital gauge cluster reported all systems normal.

Evidence points to a glitch. Over multiple mountain runs, no one at Aston Martin could reproduce the temperature issue. The car’s computer had no stored faults related to the issue. The company couldn’t reproduce the brake fade, either, claiming that similarly specc’ed DBS run hot laps ahead of F1 races constantly without issue. There’s a chance that I was in my head, and that the thought of sending a $393,886 car off a sheer cliff made me gun-shy, but I’ve also driven plenty of tracks that aren’t this hard on brakes. I know what I felt in that pedal, and what I smelled standing on that mountain.

I was heartbroken. In the handful of minutes it was working flawlessly, the DBS was brilliant. Few cars in history make 715 hp this accessible. Coming up the mountain, the rear-drive DBS managed the 5.2-liter V-12’s output with grace. The mechanical grip from the 305-section rear tires staggered me. Even with stability control fully off, on a tight hairpin, the DBS was eager to hook up. Once it did, 663 lb-ft was enough twist to make the short straightaways disappear. Tap into that reserve too early and the DBS breaks away predictably. It feels riotous and alive.

More than most modern sports, super, and GT cars, the DBS is deeply emotional. That loose, playful attitude won’t lead to record-setting lap times. Less potent cars can also beat its 3.2-second zero-to-60 time. And there are far, far easier ways to get 715 hp than with a bespoke 5.2-liter twin-turbocharged V-12. But no other setup creates this sort of stomach-trembling thunder, no other 715-hp car feels so free-spirited, and no one on Earth should worry that a car like this isn’t fast enough. It is. It also has what the majority of faster cars lack: a sense of humor.

That makes it charming, in the way that the raw stupidity of a Dodge Hellcat is charming. Unlike the Dodge, though, the Aston can back it up with exceptional dynamics and a deep sense of driver involvement. From the automatic’s ferocious shifts to the ultra-sharp steering, this is a driver’s car in a league with the greats. 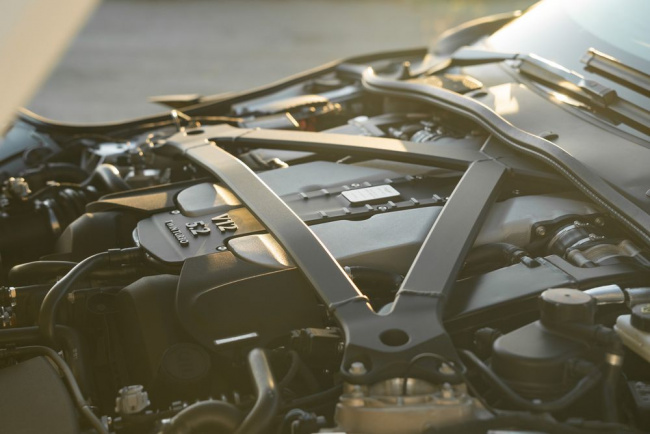 The work is doubly impressive when you consider how delightful the DBS is in everyday applications. The interior, though not astounding, is a comfortable place to spend time. The seats and suspension tuning make it comfortable enough for long-distance highway blasts, with a great stereo to keep you entertained. Powertrain and suspension settings can be decoupled, too, so if you want to keep the engine spooled but the dampers relaxed for a high-speed highway run, you can. It’s worth getting familiar with the adjustable personality traits, as the different suspension settings transform the DBS from compliant road car to honed driving instrument.

Broken down into these pieces, the DBS feels transcendent. Its powertrain, suspension, and personality are simultaneously impressive and charming. Besides the low nose and some highway droning, it’s a pleasant daily, too. A McLaren or Lamborghini may be faster or more agile, but put 50 miles between me and the road I want to drive and the Aston sounds far more compelling. If that doesn’t sell you, the looks alone should be reason to fall for the Aston completely.

But I didn’t. After I cooked the brakes the first time, I didn’t have confidence in the DBS. Even after they cooled, even after an Aston dealer checked them, and even after my second post-dealer loan, I couldn’t work back up to the pace I had set before.

The problem wasn’t just the brakes. It was that, from the moment I got it, the car was going into limp mode. The exhaust had a fault that would, at random intervals, limit revs to around 3000 rpm. Just like that, the throbbing 5.2-liter V-12 felt like a 1.5-liter three-banger. Any attempt at using CarPlay also bricked the infotainment system, which Aston says was the result of pre-production CarPlay module that the company was testing in its press cars. 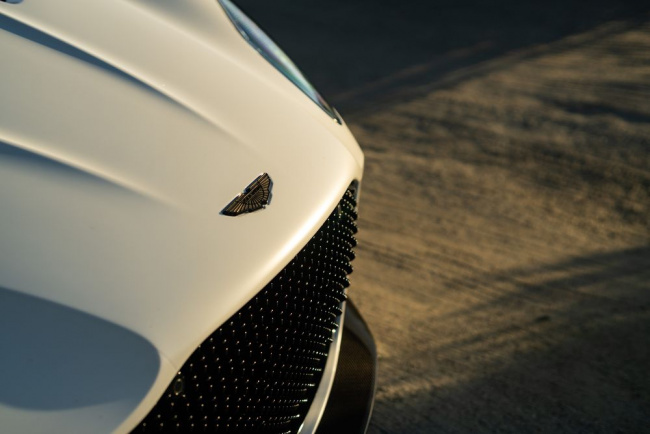 Aston addressed the exhaust issue when the car went back to the dealer, with a spokesperson noting that it’s a known issue. Even before that, I was able to clear it with some patient power cycling. The brakes, too, returned to normal, and the cooling system glitch never resurfaced.

It didn’t matter. Driving hard means trusting your equipment. When a car displays this many faults in such a short period of time, it calls everything into question. After all, if the company wasn’t able to reproduce my brake fade issue, it’s unlikely that it’s been rectified. That fault may have been with this example alone, an unlucky break for Aston. But when you charge $393,886 for a supercar, you can’t count on luck. And I wasn’t about to test mine by attacking Palomar again. 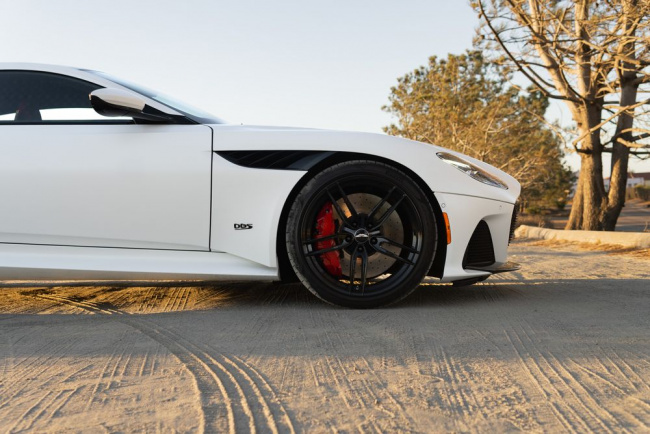 Keyword: The Aston Martin DBS Is Brilliant, When It Works

Aston Martin DBS 770 Ultimate: most powerful production Aston ever is appropriate send off for DBS

This is the British automaker’s most powerful production model yet

Ex-Ferrari F1 driver Felipe Massa has labelled Fernando Alonso as his most “difficult” teammate to work with, claiming Ferrari was “splitting in the middle” as a result. Massa spent four years as Alonso’s teammate between 2010 and 2013. The Brazilian was forced to act as Alonso’s support act, with ...

To address aerodynamic shortcomings of Carrozzeria Touring’s fastback design on the DB4 and DB5, Aston Martin decided to pursue their own development for their successor, the DB6. Intent on keeping the signature body lines, Aston Martin engineers nevertheless needed to address customer complaints of the DB5’s instability at high speeds ...

It's a surprisingly big week for vehicle debuts.

Aston Martin DBS 770 Ultimate: The last one of its kind

Aston Martin DBS Production to End on a High Note: The 770 Ultimate

Farewell, DBS: this is the Aston Martin DBS 770 Ultimate