I must be getting old. Wandering around the more affordable cars parked outside the Bonhams tent at the Revival, my eyes were drawn to a rather sedate looking car. A quick peer through the window revealed two important points about it: it was manual and had right-hand drive. A slightly closer inspection revealed three eared Borrani knock off wheel spinners, so now I knew. The manual ‘box suggested this was a very early car in the series before the automatic was introduced, the wheels confirmed it. I was looking at a Ferrari 365 GT4 2+2. 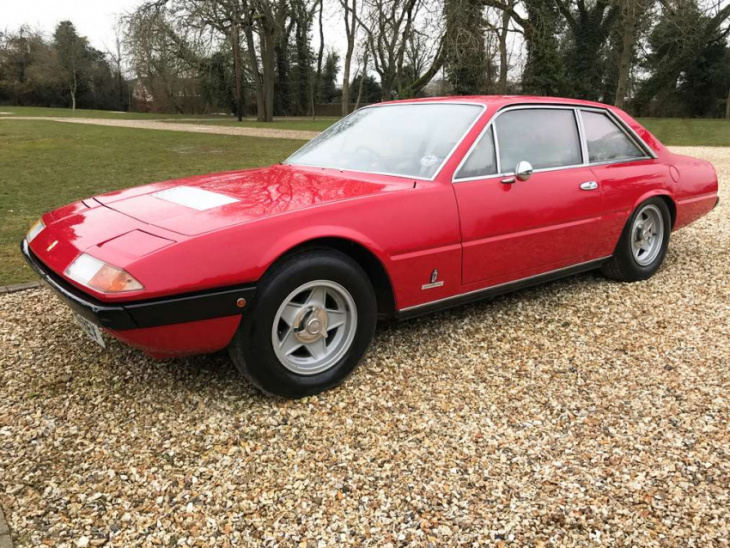 I’ve said for years that the earlier 365 GTC/4 was the most underrated Ferrari of all, but I don’t think the contention really stands up any more. The market is now fully awake to these gorgeous cars, a fact reflected in asking prices deep into six figures, on the rare occasions they come up for sale. But here before me was the most desirable version of a series of Ferraris that survived on sale for 17 years, in rare right-hand-drive form guiding at £52,000 to £60,000 despite its clearly excellent condition.

It wasn’t that long ago that I used to write stories about how you could by a V12 Ferrari for less than ten grand. Whether you should do so or not was a completely different question because all that would buy you was a scruffy 400i, probably in left-hand-drive, definitely with an automatic gearbox. But even those have risen in value of late: casting around, the cheapest complete functioning car I could find for sale in Europe was valued at £40,000.

But it’s still not much is it? Ok, I’d never recommend a Ferrari fitted with an entirely unworthy three-speed GM automatic gearbox, but a manual 365 GT4, 400, 400i or 412i? Now you’re talking.

Why are these cars so undervalued? There are several reasons, I think. By the standard of V12 Ferraris if few others, they were built in reasonably large numbers, though how many have survived is another matter entirely. More than any previous Ferrari, these cars were built to be daily drivers and few received the attention lavished on other Ferrari V12 show queens. I think also the fact this was the first Ferrari to be fitted with an auto ‘box – introduced with the 400 model in 1976 – has also dragged it down. Any Ferrari that was suited to a two pedal transmission simply didn’t sound like much of a Ferrari.

But really I think it’s mainly to do with the styling. What is strange is that it is horribly divisive. I’ve seen it described as ‘hideous’ which I simply don’t understand. This was a car penned by none other than Leonardo Fioravanti of Pininfarina and while it lacks the feline grace of the GTC/4 it ostensibly replaced and the drama of Ferrari’s other 12-cylinder cars, to me there is elegance, sophistication and majesty in the three-box design.

They were also better to drive than history has recalled. I’ve driven examples of all and the only one that didn’t do justice to the horse on its nose was a tired 400 on baggy suspension running on ten cylinders at most. But the first was the best. The 365 GT4 took the running gear of the GTC/4, including its 4.4-litre engine producing 325PS on sidedraught carburettors and its five-speed gearbox. Suspended on double wishbones at each corner, it was both faster and more nimble than its rather sedate appearance might suggest. Opposition like a Jaguar XJ12 would scarcely have seen which way it went.

I remember well a drive in France in just such a car perhaps 30 years ago. Its owner was a family friend wracked with indecision about what to do with it: “I so rarely use it, it costs a bomb to maintain and I really should sell it. But every time I drive it I can’t bear the idea of being without it.” And I could see why: this was a different kind of Ferrari experience, lacking the blood and thunder of the more sporting models, but none the worse for that. It was quiet and conspicuously comfortable, but with this whole other side to its nature that would only reveal itself when some impudent young pup came sniffing at its tailpipes. Then you’d slowly change down a couple of cogs, open the taps and let the V12 do its thing. Seconds later you’d look in the mirror and your pursuer was nowhere to be seen.

Of course, they’re expensive to run even when there’s nothing wrong – my friend claimed his would return 12mpg if driven gently. But to me there’s a charm to these cars as the last of the V12 Ferraris from what I would call the old and original era of the company. Compare the very last, the 412i which was produced until 1989, to the 456GT that eventually replaced it in 1993 and the latter doesn’t feel merely four years younger than the former, but something closer to four decades. But traditional in feel and design as they are, they remain special and while no longer positively cheap, then certainly among the best value Ferraris you can currently buy. I’d not expect it to stay that way forever.