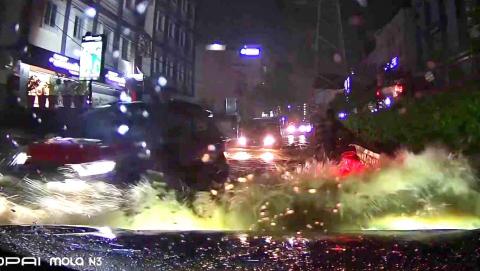 I assumed that, at worst, the water level would reach only about a foot & at best, half of the tyres would be underwater. I was so wrong.

BHPian bgt_titan recently shared this with other enthusiasts.

The recent events in Bangalore where the roads were flooded and many cars were struggling to wade through also had some follow-up discussions on would an EV be able to wade through these levels of water like an ICE. My immediate thought was that – yes, of course, EVs would be fine. The cars are rated IP67 and should do fine. But, of course, I wouldn’t want to intentionally take the car into the water just to prove it. Little did I know that’s exactly what would happen to me within a week of even thinking about it.

So, the story begins on Wednesday 7 September, when my wife caught a cold. Everyone has their weird homemade solutions to alleviate the effects of a cold. For me, it’s eating a hot spicy pizza. For my wife, it is eating hot piri piri fires. So, in late evening (9 PM) she asks for me to get fries from a nearby McD. I say let’s go ourselves, if we order through Zomato then we’ll get cold soggy fries. She didn’t want to go out as she was tired. So, I looked up Zomato and guess what – all services were stopped as it was raining. No fries for her on Wednesday.

The following evening (7 PM) on Thursday, as we finished dinner my wife says – At least today will you get me fries? So, sensing trouble coming I said I’ll go and bring it. It’ll be better than delivery. The place is just about 4 Kms from my house and it should take me 20 minutes to reach and about 5 minutes for the order. Total time of 45-50 minutes. That was the plan. I asked my brother to accompany me, in case there wasn’t parking at McD he could go in and bring the food while I waited somewhere nearby.

As soon as I left my home, it started raining. About a kilometre from my home, I see that half of the road has been submerged and under foot-deep water. Surprised, I ask my brother has it been raining that much? He says – yes, throughout the day both yesterday and today. I’d been having hectic days at work and was pretty much at my system (in a closed windowless home office) from 9 AM to 7 PM and hadn’t been looking at the weather outside. In any case, that should have been a warning sign. I didn’t heed it.

The McD is at the end of a road through a place called Alwal hills. As I turn into the road, I remark that there’s surprisingly low traffic today. I reach the end of the road, about 500 meters from the McD, when I realize why. This is the lowest point of the road and it was underwater. Considering that the hotel was so close, I didn’t want to take a detour which would have been at least 5-7 Kms longer. Also, I completely misjudge the depth and assume that at worst the level would reach only about a foot and at best half of the tyres would be underwater. I was so wrong. The video shows you what happened.

Well, apart from the annoying folks coming on the wrong side of the road (probably because the other side was under even more water) and me splashing a poor guy (completely unintentional), the car did well. The only scary moment was at the 1:00 mark when the splash of the Creta momentarily made me feel like the car was floating. After coming out of the water, the only after-effect seemed to be the horn sounding a bit wonky. This went off after a bit (15-20 minutes). So, I think the IP67 rating is tested successfully.

Well, the story doesn’t end here. I use another route to return. All the traffic that I remarked had disappeared, was on this road. After getting stuck in a traffic jam for close to 25 minutes, I finally reach home an hour and a half later. The fries were obviously no longer hot. My wife’s reaction when I come home – why did you go out in the rain? I’m thinking – isn’t she the one who’d asked for the fries?

To cap off a brilliant adventure – I didn’t realize as I placed the order at the McD, chatpata spice mix and piri piri mix are different. I’d brought the chatpata mix, and my wife says after eating that the chatpata mix was terrible and she’s very unhappy with the fries. Her closing comment – Can’t you do a thing right?

I didn’t catch a break at home, luckily the Kona did catch a break and didn’t suffer despite my dumb idea to go semi-submersible. I’ve driven over 150 Kms since this event and the car is still working perfectly.

Here’s what BHPian EV Fan had to say about the matter:

Well, I hope since most EVs are heavier than their ICE counterparts so fewer chances of floating. And no concern about air intake/exhaust and all water ingress points for ICE engine, the IP67-rated engine & motor should hopefully be able to manage water wading.

My personal experience on 5th (Monday). I had taken the 500 bus service via Bellandur road around late afternoon, they were operating an electric one. At the water crossing, it seemed like the conductor was encouraging the driver to go ahead fearlessly as it was an electric bus and nothing would happen. (Sorry I am not proficient in Kannada, but can understand in bits & pieces).

The scene was apparently something like this (from within the bus).

Keyword: Testing the limits of my Hyundai Kona EV in the recent Bangalore floods