Science-fiction fans divide stories into “hard sci-fi” and “soft sci-fi,” a blurred line that Lightspeed Magazine might attempt to define, but we’re sticking to cars. We bring it up only to suggest that electric vehicles might benefit from a similar subcategorization. For the hard-sci-fi fans, those detail-hungry, all-in adopters, we have tech- and trick-heavy machines like the Rivian R1S, Lucid Air, and Mercedes-Benz EQS sedan. For those just dipping in, unwilling to learn a whole new language for the commute to work, there are the “soft” EVs, and here we find the Mercedes-Benz EQB350, an electric SUV so traditional in feel that one might drive it for days and never realize there wasn’t simply a quiet gas powerplant under the hood. 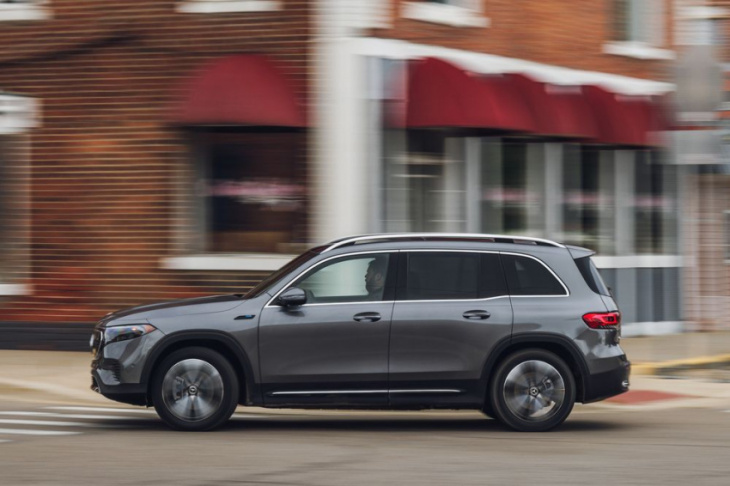 One of the reasons the EQB seems familiar is that it’s based on the GLB, Benz’s turbocharged four-cylinder small SUV. The EQB dresses a bit hipper, with elongated LED headlights, blue-highlighted 19-inch wheels, and a glossy black panel in place of a grille, but it shares the GLB’s squared-off rear and upright profile. More importantly, at least to those made uneasy by the all-screen future proposed by many EV designers, the EQB interior offers plenty of hard buttons to go along with its digital displays and center touchscreen.

The base EQB300 uses two motors producing 225 horsepower and 288 pound-feet of torque. We spent time in the higher-powered EQB350, which ups the output to 288 horses and 384 pound-feet. Both come standard with all-wheel drive, a 400-volt architecture, and a 66.5-kWh battery that can recharge from 10 percent to 80 percent in about half an hour at a DC fast-charging station. Mercedes says the 350 offers 227 miles of range, whereas the 300 can go about 15 miles farther. 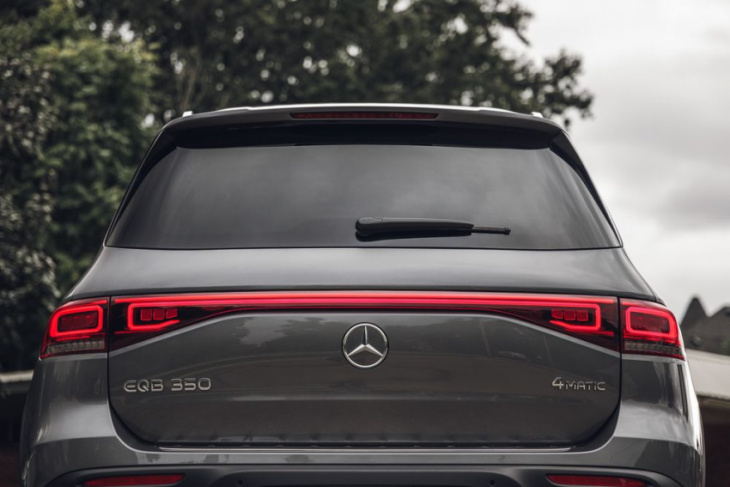 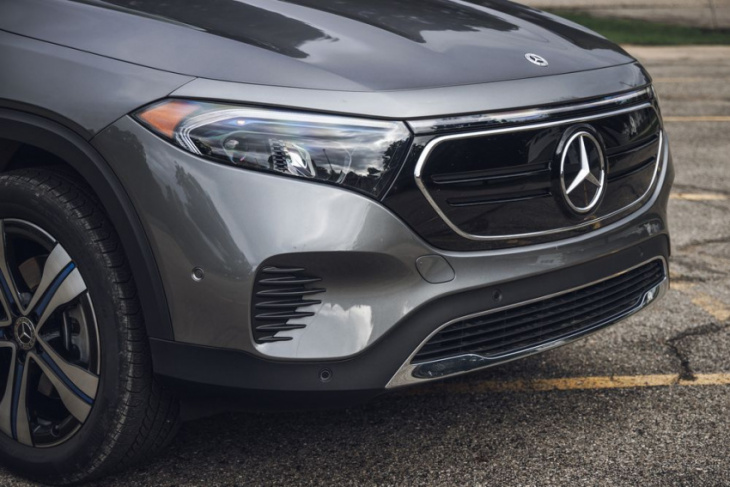 This small SUV is unsurprisingly not a rock star in terms of acceleration. In our testing, it hit 60 mph in 5.4 seconds, which is a reasonable result for this segment and 0.2 second ahead of the Audi Q4 e-tron. Put the accelerator down for a pass at freeway speeds, and the EQB will hustle from 50 to 70 mph in 3.6 seconds (against the Q4’s 3.3 seconds). Unless you live by a famously difficult merge point, you won’t be pained by the EQB350’s level of performance.

Despite the EQB’s compact footprint, the cabin is open, bright, and comfortable. The EQB’s tall windows and standard panoramic glass roof let in lots of light, so even with the mostly black vinyl interior in our Premium trim car, it was neither grim nor claustrophobic. Microfiber and leather are options in all trim levels. Another benefit of the EQB’s boxy shape is rear-passenger headroom. Not only can leggy adults stretch their limbs, but they also won’t find their head too cramped against the headliner, and the rear seats offer several angles of recline. It’s a much different story for the third row, which is an extra-cost option we wouldn’t bother with unless you like to seatbelt in your grocery bags. It’s certainly not roomy enough for hauling people any distance. Without it, there’s plenty of cargo room, despite the EQB losing several cubic feet to the battery under the floor. 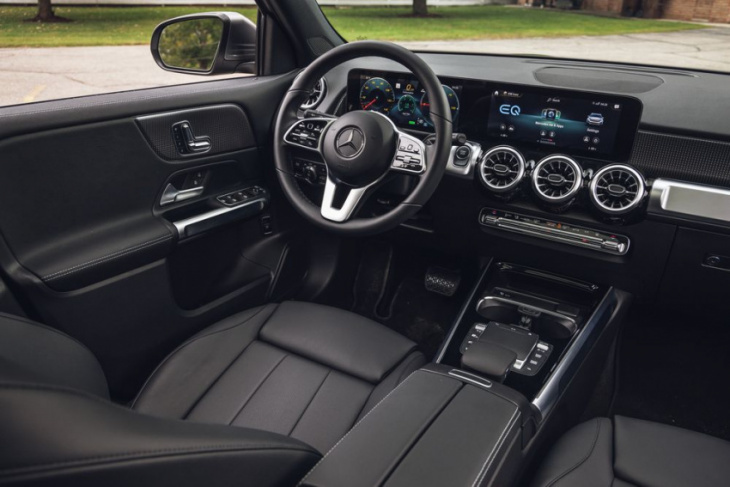 One way an EV can cause trepidation is the user interface for basic controls. Will you need to delve into a touchscreen to find the turn signal? Or perform feats of wizardry to select a forward gear? Not in the EQB. Its infotainment quirks are minor and will be familiar to any modern Mercedes owner: overly-sensitive buttons on the steering wheel and a touchpad on the console that could be space better used for small-item storage. Other than that, we found the interior layout attractive and easy to use. It’s straightforward and unfussy, with just enough detail to be interesting without becoming busy. Mercedes Voice Control is one of the best we’ve experienced, but don’t let your passengers know they can ask the car to tell jokes, or you’ll spend the rest of the drive hearing a monotone voice deliver bangers like this one: “Two fish were in a tank. One said to the other, ‘Do you know how to drive this thing?'” Funny, Mercedes, but we’d rather have wireless Apple CarPlay, not currently an option.

LOWS: 227 miles of range isn’t stellar, third-row seat is pointless, MBUX joke-telling function is as cringey as your Uncle Fred.

On the road, the EQB350 is just what a small electric SUV should be: silent and smooth. It doesn’t emit spaceship warbles or wind-tunnel whooshes—the only sounds are the slight hiss of the tires and whatever music you’re playing over the stereo. It steers and brakes with minimal drama. In testing, it stopped from 70 mph in 178 feet (a mere foot longer than rival Audi) and clung to the skidpad with 0.85 g of grip. One of the few obvious electric-car features the EQB350 does showcase is adjustable settings for its regenerative braking, controlled on the steering wheel paddles. Otherwise, you may only remember it’s eating electrons when the screen warns that it’s time to find a charging station. 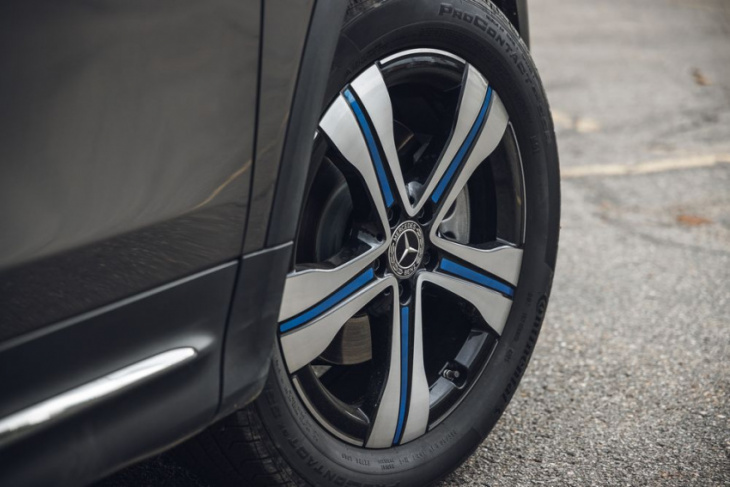 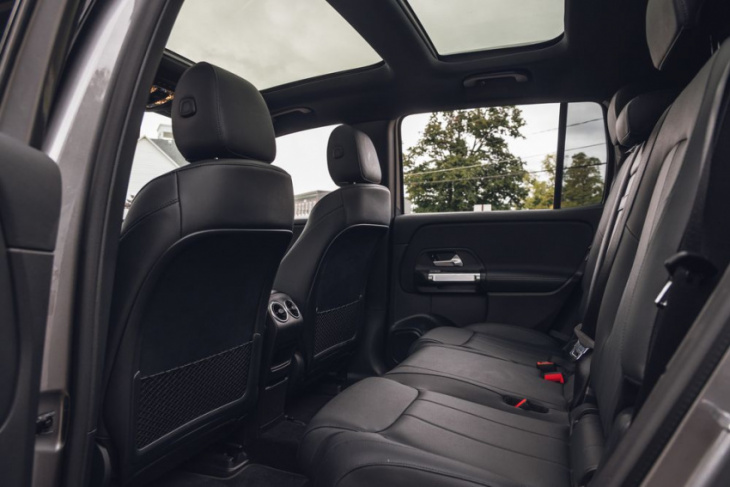