The second generation of the Lexus NX, the brand’s compact luxury SUV, doesn’t look a whole lot different than the first, but there are substantive changes beneath the sheetmetal. Nowhere is that truer than with the new NX450h+ plug-in-hybrid variant.

The reworked NX exterior isn’t quite the riot of creased sheetmetal that its predecessor’s was, although it still eschews the sleek minimalism of, say, the Volvo XC60. The NX again presents a pinched face to the world, with its double-angled grille and checkmark-shaped running lights.

The interior is slightly roomier than before, although small windows diminish that impression. Typical of Lexus, all interior touchpoints, starting with the steering-wheel leather, have a quality feel. Speaking of touchpoints, both the exterior and interior door handles are electronic, popping open with a gentle press (just like a Corvette!); the inside handles also are automatically disabled if a vehicle or cyclist is approaching on that side. Like so many Toyota hybrids, the NX450h+ has a stubby electronic shifter with an unusual double-J shift pattern, although an owner would likely grow accustomed to that oddity.

Lexus is finally moving away from its remote touchpad infotainment interface, and the new NX has a touchscreen instead. Grandly sized at 14.0 inches (a 9.8-inch version appears in lesser trims), the display looks great, but despite all that real estate, it can show two functions at once only when smartphone mirroring. Both Android Auto and Apple CarPlay are wireless, and Apple Music and Amazon Music are integrated within the system. Wireless smartphone charging is an option and is paired with digital-key functionality. As is typical, the interface would benefit from a few more physical controls beyond merely a tiny volume knob and two knobs for cabin temperature. And there’s nowhere to rest your hand when trying to hit the correct touchpoints on the large screen (for audio tuning, say, or adjusting the fan speed). Nor are we fans of the steering wheel’s multimode four-way buttons, which have two sets of functions, meaning there’s a 50 percent chance they’re not in the mode you need. 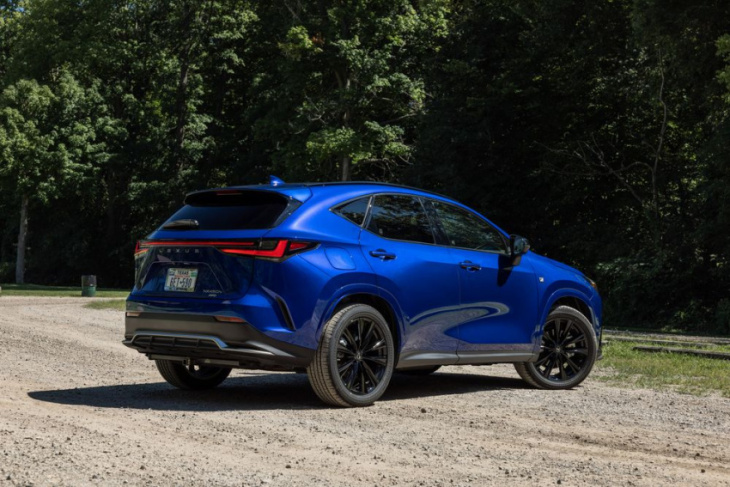 The big news with this generation, however, is beneath the surface with that new plug-in-hybrid powertrain, which joins the naturally aspirated base engine, turbocharged uplevel engine, and regular hybrid. All are four-cylinders. With 302 horsepower, the plug-in NX450h+ is the clear alpha dog among its siblings.

The powertrain is essentially lifted from the Toyota RAV4 Prime (the two cars share a platform). It uses the same 2.5-liter naturally aspirated four as in the base NX250 and the standard hybrid, the NX350h. (The nonhybrid NX350 has a turbocharged 2.4-liter four.) Electric motors assist the gasoline engine and are the sole motive source for the rear wheels, providing all-wheel-drive capability. 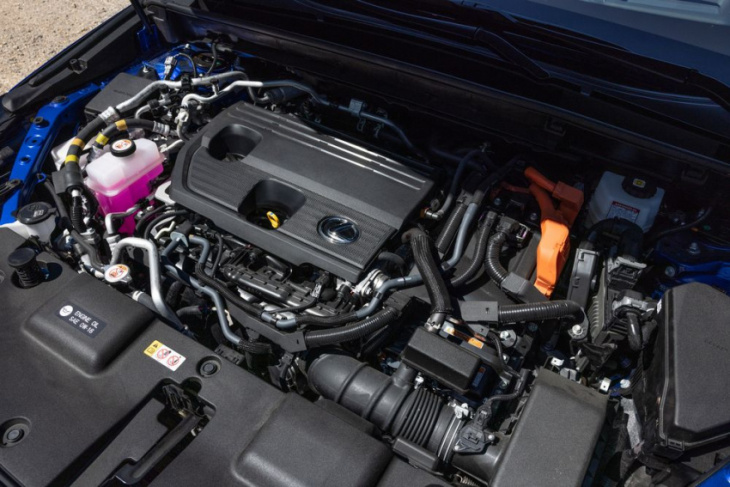 An 18.1-kWh lithium-ion battery pack feeds the motors. That substantial battery affords a hefty 37 miles of EV range, per the EPA—or 33 miles on the highway in our testing (same as the RAV4 Prime). The only other plug-in hybrids in this class are the XC60 T8 Recharge, the Lincoln Corsair Grand Touring, and the Audi Q5 55 TFSI e. The Volvo got a larger battery pack for 2022 that upped its range to 35 miles, but the Lincoln is good for only 28 miles and the Audi just 23.

Our tester was fitted with the optional 6.6-kW onboard charger, which drops full recharge time from 4.5 to just 2.5 hours using a 240-volt power source. On paper, it’s an $800 option, but Lexus tells us that every NX450h+ sold in the U.S. will be equipped with this worthwhile feature instead of the 3.3-kW equipment standard in other world markets.

Even when it’s not running as an electric, the NX450h+ is a gas miser at an EPA-estimated 36 mpg overall. We got 35 mpg in our 75-mph highway fuel-economy test (exactly matching the figure for the regular NX hybrid). 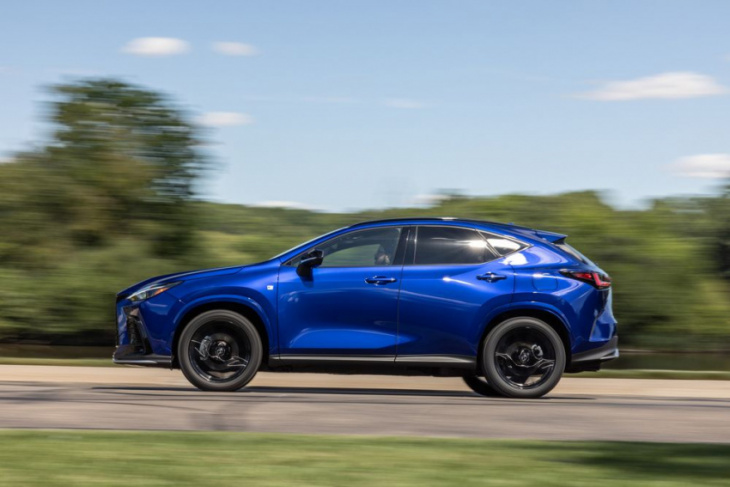 Just as with the RAV4 Prime, the NX450h+ easily outhustles its siblings. Whereas the regular NX350h plods to 60 mph in 7.6 seconds, and the turbo-four NX350 takes 6.6 seconds, the NX450h+ needs just 5.6 seconds. (We haven’t tested the base NX250, but that version’s 203 horsepower is the weakest in the group.) The plug-in hybrid similarly stands tall when we look at passing times, zipping from 50 to 70 mph in 3.8 seconds, against 5.0 for the regular hybrid and 4.5 for the NX350. This is also one plug-in hybrid that, when switched into EV mode, doesn’t wake the gas engine when you floor the accelerator. In fact, it’s reasonably perky as an EV when squirting around town, although its 9.4-second time to 60 mph under battery power wouldn’t be considered quick. 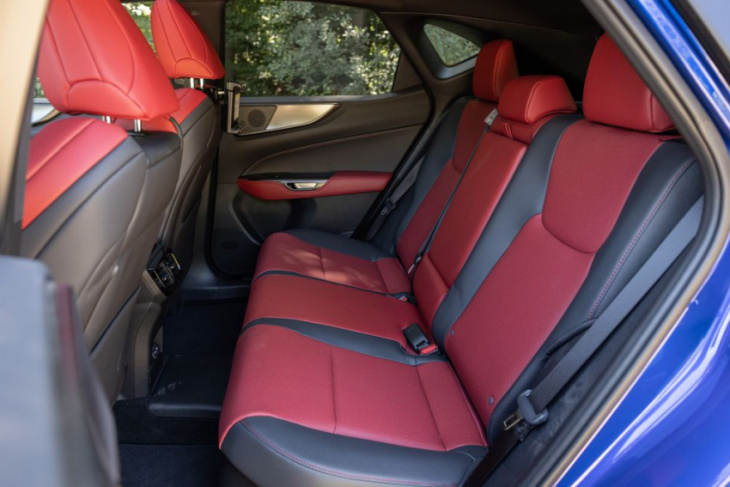 Look outside the windows of the Lexus dealership, though, and the NX450h+’s muscular image fades a bit. Its 60-mph time, for instance, is just 0.1 second ahead of the 228-hp BMW X1. And the Lexus trails its mainstream-badged cousin, the Toyota RAV4 Prime, which rips to 60 mph in 5.4 seconds. The plug-in-hybrid Audi Q5, which bristles with 362 horsepower, is significantly quicker, storming to 60 in 4.5 seconds. The Lexus easily walks away from the Corsair, however, which needs 7.0 seconds to complete that run.

As you might expect, the ride is posh, with some head toss the only aftereffect of an encounter with patchy pavement. Even with the 20-inch wheels that are standard here, the 235/50R-20 tires have generous sidewalls, helping to cushion sharp-edged bumps despite being run-flat tires. Those tires held on to the tune of 0.81 g at the skidpad, but the NX450h+ F Sport has little interest in brisk cornering. Tire squeal sets in early, as does body roll and understeer. This category is hardly rife with fun-to-drive offerings, but the Acura RDX, the BMW X1, or even the Mazda CX-5 are all more engaging than this Lexus. 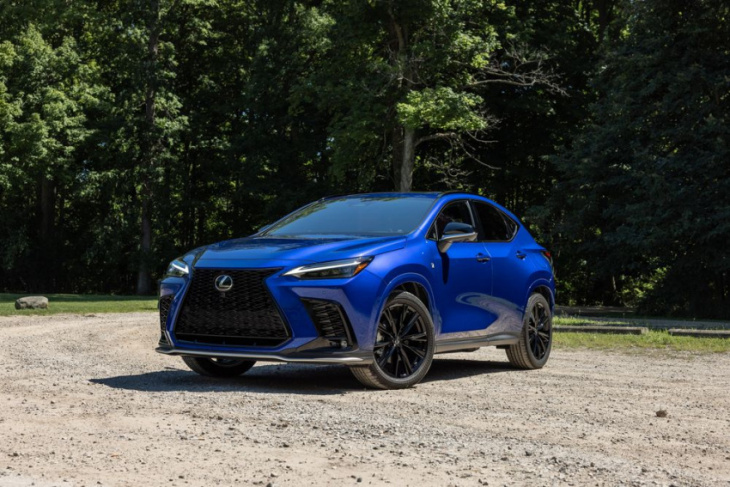 That’s likely not much of a concern for NX shoppers. The bigger issue for them is whether the plug-in hybrid is the right choice. At a starting price of $57,300, the NX450h+ costs $14,600 more than the NX350h and a similar $14,200 more than the nonhybrid NX350. (Add another $1250 if you want the 450h+ F Sport trim found on our test sample.) If fuel economy is the driving concern, better to save that $14K and go with the similarly economical NX350h. For those seeking top performance, the NX450h+ is the best choice, although it may not be sporty enough to satisfy. The buyer who is going to be diligent about plugging in will be the one who really makes the most of the NX450h+, given its long EV driving range. Factor the battery-powered miles into the mix, and fuel economy will exceed the regular hybrid’s, with the far more robust acceleration a nice bonus. As you probably could have guessed, Lexus’s first plug-in only realizes its potential and manages to be a plus if you actually plug it in.

Is the Magic Number 3? It Is When You’re Picking out the Right 2023 Lexus RX to Drive

Lexus IS range gets spec change for 2022

Facelifted Lexus IS 300h in South Africa – Pricing and specifications

2023 Lexus IS performance specs and features Interior features of the IS How safe is the Lexus IS? How much does the 2023 Lexus IS cost? The last part of the year ushers in cooler temperatures, pumpkins, holidays, and news from car manufacturers regarding new features, changes, or updated ...

Port Hope is a small Ontario town that overlooks the restless blue waters of Lake Ontario. If you walk the main street of Port Hope today, you can’t help but notice the rows of preserved 19th-century stone and brick buildings. In fact, with over 270 heritage-designated buildings within its municipality, ...

The Lexus LS enters the 2023 model year with a handful of updates aimed at improving the usability of its infotainment system. You’ll still find a standard 12.3-inch infotainment screen in the dashboard, but it now features the Lexus Interface system that debuted in the redesigned 2022 NX, which ...

The Lexus RX looks more aggressive and aims to handle better with parts from TRD. Toyota Racing Development, known as TRD, has announced a series of upgrades and visual modifications known as F Sport parts for the new 2023 Lexus RX SUV, with a focus on improving handling and ...

The Next Lexus GX May Be a Four-Cylinder Hybrid, Rumor Says

Lexus UX upgraded – and EV given 40 per cent range boost

Lexus Electrified Sport concept will be an all-electric LFA successor

Could Lexus Overlanders be coming? Lexus Leans Into Overlanding With New Concepts

This Affordable 2023 Lexus SUV Comes Only as a Hybrid Model

See what Lexus is displaying at 2022 SEMA Show

Lexus Brings Track-Focused IS, LX And GX Overlanders To SEMA

600-horsepower IS leads Lexus to SEMA

Lexus Brings Overlanding SUVs, a 600-HP IS, and an Electrified Concept to SEMA

Previewing the next 600 km EV SUV, Lexus LF-Z arrives in Vietnam - first Asian debut outside of China and Japan