It’s been a weird year for GM’s pickup trucks, as 2022 saw a hurried refresh of both the Chevrolet Silverado and the GMC Sierra land mid-summer as replacements for the poorly-received redesign that had arrived only a couple of years before hand. Of these two models it’s the Sierra that has seen the longest list of upgrades applied, in particular to the Denali line of high-end pickups that struggled out of the gate due to their decidedly lackluster interiors and feature set. 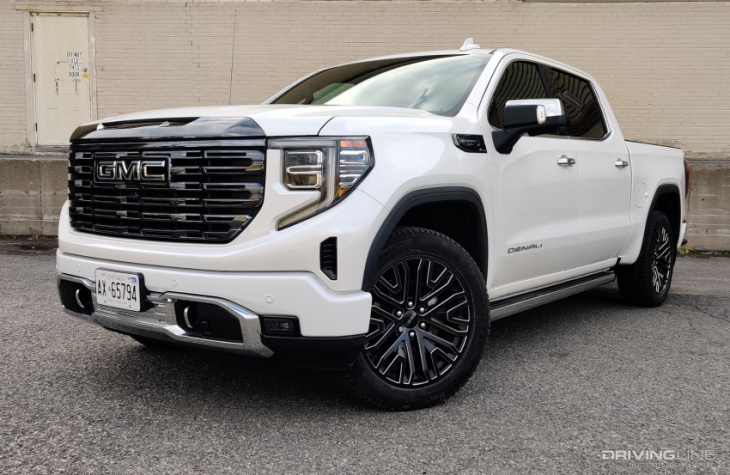 The introduction of the new Sierra Denali Ultimate trim is intended to once again push GMC to the pinnacle of the ultra-expensive truck pyramid, leap-frogging the still-here standard Denali in terms of standard gear and cabin finish. Where does the new 2022 GMC Sierra Denali Ultimate surge ahead of last year’s Denali, and where does it tread water? Here’s a breakdown after spending a week with GMC’s latest luxury truck.

The 2022 GMC Sierra Denali Ultimate doesn’t stray too far from the sheet metal shown on the previous version of the truck. 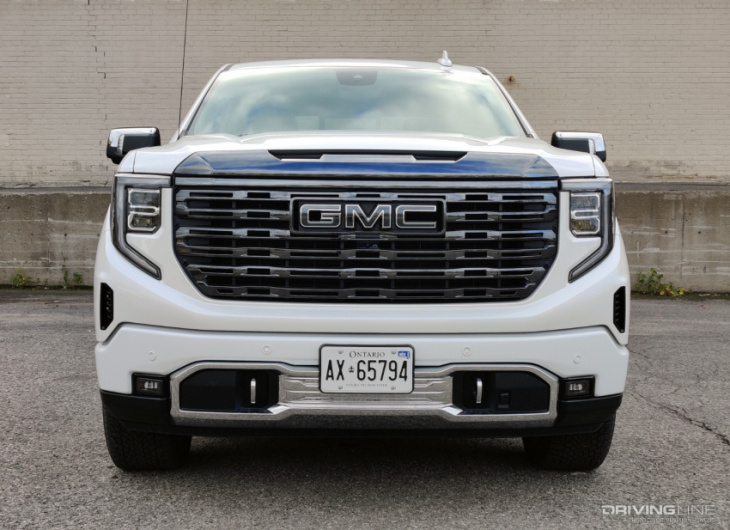 The differences lie in the details, primarily at the front of the vehicle where the grille has been given a more subtle, dark chrome pattern (with matching the GMC logo), the headlights have been reshaped into more attractive LED slashes (versus the inset, all-in-one design of before), and the fog and running lights have lost their chrome surround (with a set of lights moving from the lower fenders to the bottom of the bumper). 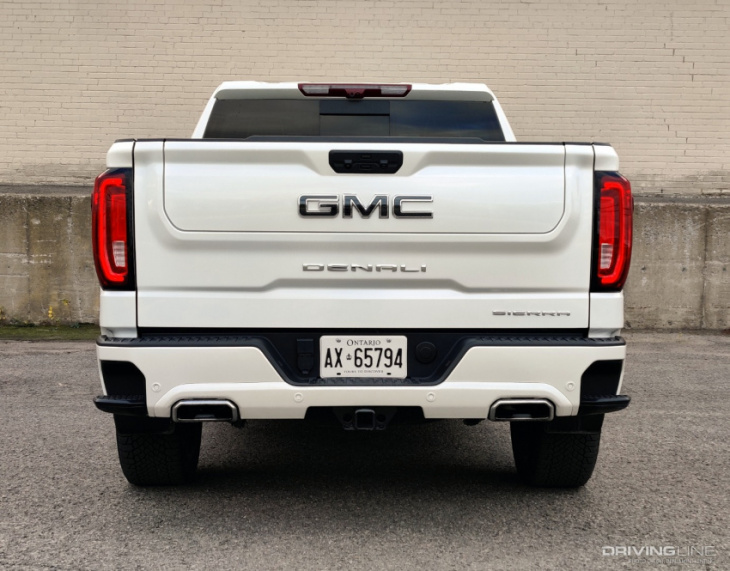 It’s an improvement, but it’s offset somewhat by the fact that the rest of the truck is essentially status quo, especially at the rear which continues to offer perhaps the busiest-looking collection of cut-lines and badges on any tailgate out there.

The four-door Denali Ultimate’s most radical departure from the past is found in its passenger compartments, which is precisely where the older truck stumbled the hardest. 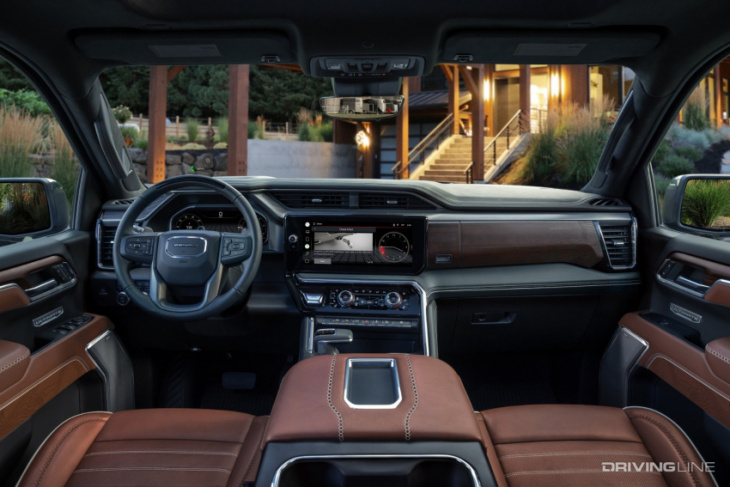 The 2020-2021 Denali featured a cabin design that strongly resembled its Chevrolet Silverado counterpart, complete with an over-reliance on black plastics that stood in stark contrast to the sumptuous interiors provided by high-end trucks like the Ram 1500 Limited. It was a truly disappointing state of affairs, especially given the years of experience at GMC in producing Denali interiors that were a cut above the rest of the pack. 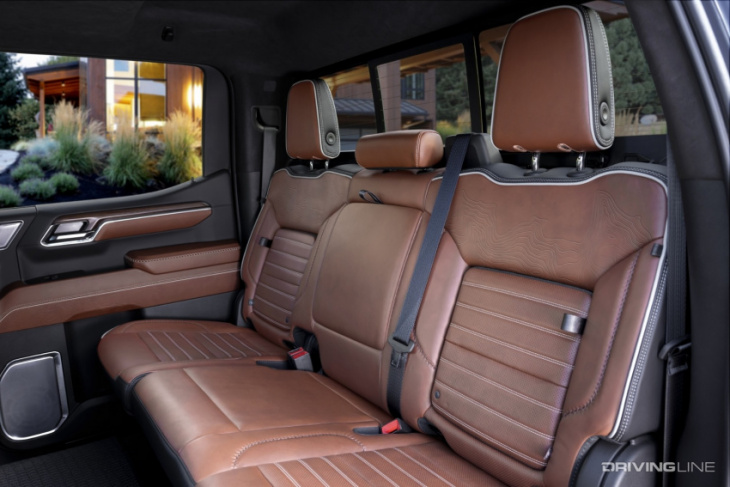 The 2022 refresh banishes plainness with a fantastic do-over that completely transforms the Sierra’s interior. Gone is the sea of plastic and in its place are a tasteful combination of wood and leather on nearly every surface, with the center console, door panels, and dashboard all reconfigured to be more pleasing to both the eye and to the touch. On top of that, GMC has introduced a new, larger touchscreen that meshes well with a set of buttons and dials for stereo and heating/cooling controls on the center stack. The truck’s interior dimensions remain generous, and the addition of a relief map motif on certain wood and leather surfaces provides extra eye-candy for a passenger compartment that is once again capable of competing with the best of what the full-size truck segment has to offer.

The Denali Ultimate features a pair of familiar engine choices, starting with its standard 3.0L turbodiesel straight-six that’s good for 277 hp and 460 lb-ft of torque. For roughly $2,500 more, you can substitute the brand’s mightiest V8, a 6.2L unit that’s good for 420 hp and the same 460 lb-ft of twist. 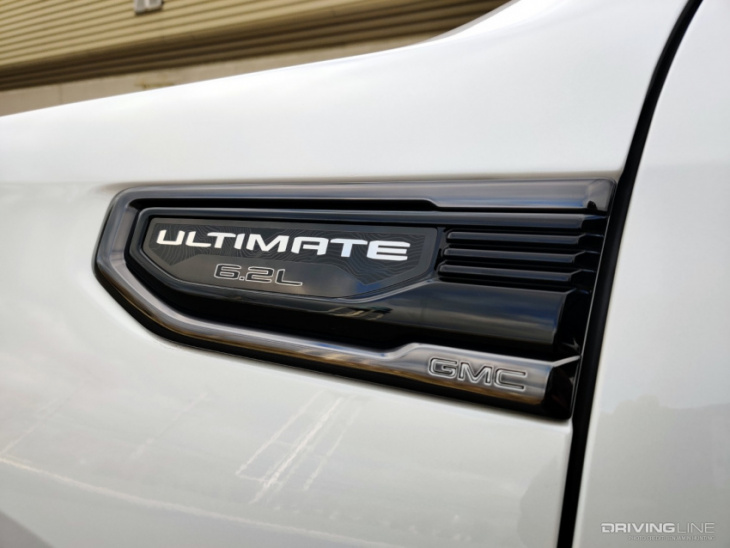 My test vehicle came with the gas engine, and it’s long been one of the stoutest performers in the GM fleet. This continues to be the case in the Denali Ultimate, with the Sierra’s acceleration giving it all the gumption required to deal with traffic, while maintaining its 11,700 pounds of max trailering capacity (nearly 3,000 pounds more than what the diesel has to offer). Fuel mileage is predictably dire in comparison to the turbodiesel: I saw 15-mpg combined, including a long highway road trip, which is well under the 24-mpg combined boasted by the 3.0L motor. 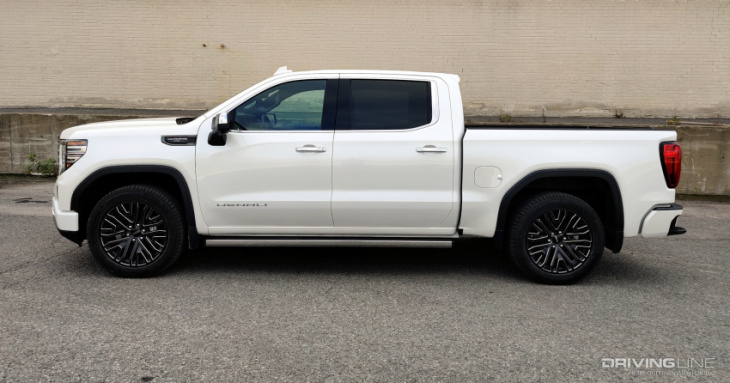 Four-wheel drive (including low range) is standard with the Ultimate, as is a 10-speed automatic transmission. The latter occasionally delivered a shudder when cruising at low engine speeds, which broke the otherwise smooth façade painted over the Sierra’s driving experience.

Again, there’s nothing new to report when it comes to the Sierra Denali Ultimate’s suspension details. 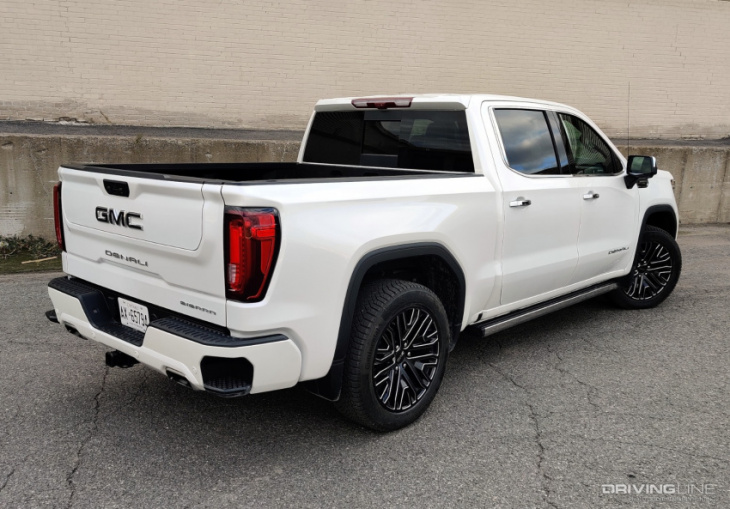 The truck continues to ride on GM’s excellent magnetic ride control shocks, which are capable of reading road conditions a thousand times per second and adjusting damping to compensate for imperfect pavement. Unlike the Ram 1500, the Sierra sticks with leaf springs at the rear and coils at the front, but overall the pickup’s ride is quiet and composed.

The revised Denali Ultimate brings four tricks to the truck party, of which two are old hat. The MultiPro tailgate carries over, which the inclusion of a stereo system and an optional set of lights embedded in its flip-me/fold-me/step-on-me fold out origami. 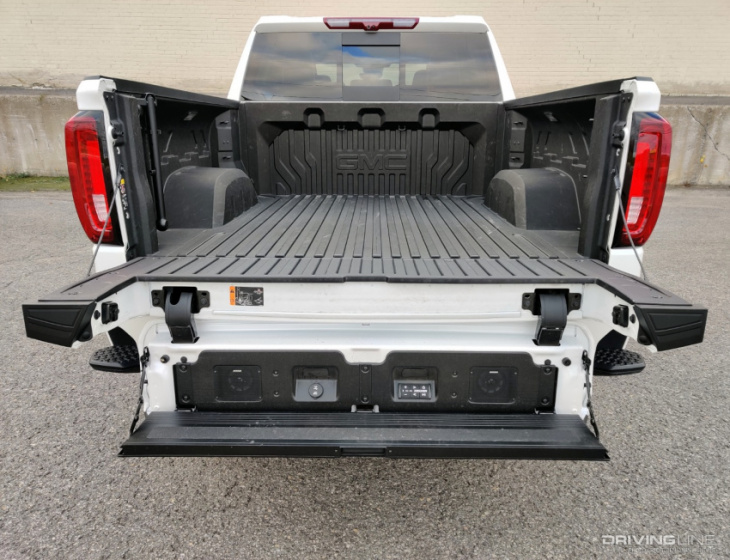 The Ultimate also makes last year’s CarbonPro carbon fiber composite bed a mere $115 option, compared to the $1,125 it will set you back if you specify it on the regular Denali model (which requires the installation of the tailgate sound system and the purchase of the ‘CarbonPro Edition’ trim to the purchase price). 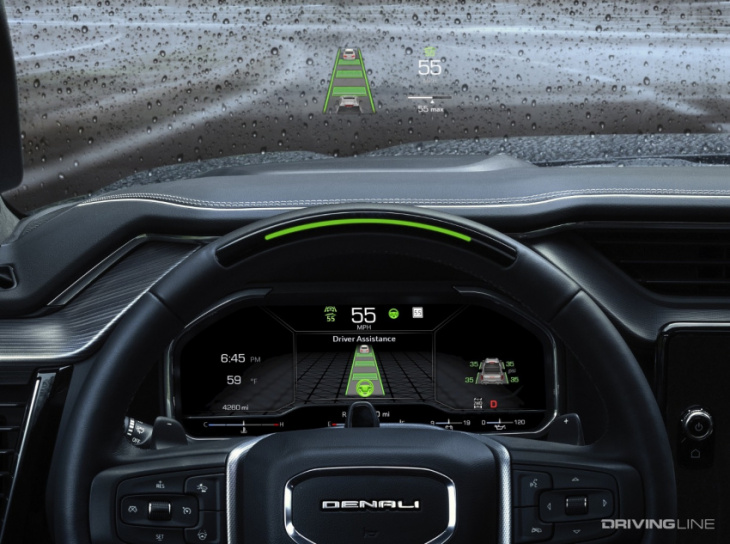 New to the game are an enormous 15-inch head-up display that projects a number of different information screens out over the hood, and more importantly, GM’s Super Cruise driving assist feature. The system, which tracks whether the driver is paying attention and allows for roboticized driving, steering, and even automatic lane changes with no hands required on the wheel, is something no other full-size truck can match, with Ford’s similar BlueCruise unable to deliver the same kind of smooth operation. Super Cruise now allows for operation while the Denali Ultimate is towing, and while I didn’t haul anything outside the cargo bed while using the system I was duly impressed with how well it functioned in the Sierra.

Now that the regular Denali is merely second-from-the-top when it comes to GMC Sierra trim levels, be prepared to fork over serious cash for the ultra-luxurious Denali Ultimate. The ‘base’ Denali starts at just over $67,000 (for short-box, two-wheel drive crew-cab models), while the Ultimate boosts that ask to a whopping $83,000, which is a huge $25,000 climb over last year’s Denali starting MSRP. 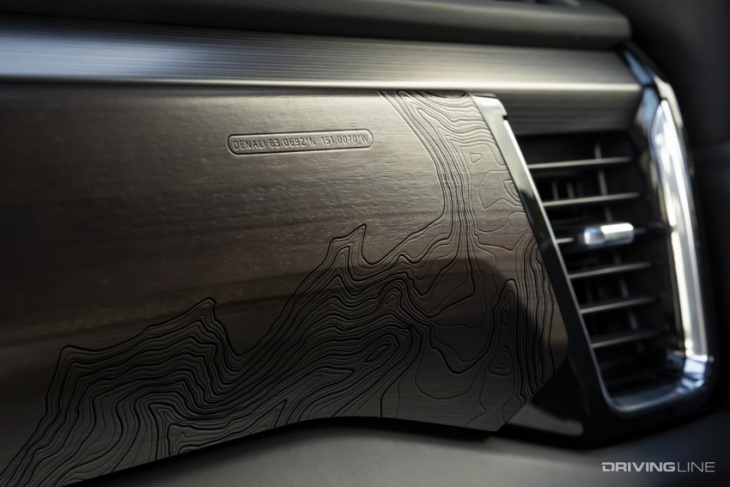 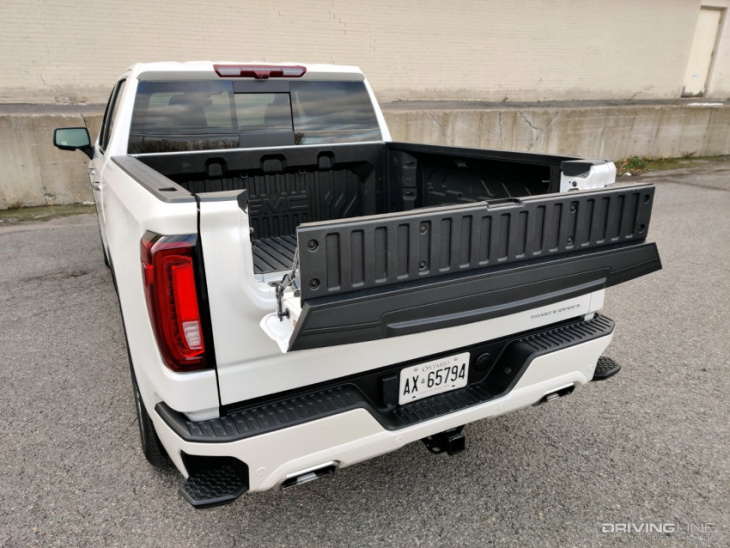 The 2022 GMC Sierra Denali Ultimate is definitely a comfortable, capable, and stylish truck. Given that it doesn’t focus on one specific area to the same degree as the Raptor, TRX, or either of its electrified competitors, however, its eye-watering price might make turn more than a few potential customers two steps back towards Denali land, where a more modest implementation of the Sierra’s redesign awaits.

What interest rate is GMC offering? What about leasing a 2023 GMC Sierra? What about Sierra Heavy Duty incentives? When a truck maker has tons of incentives available for new trucks, it could be a red flag that the truck isn’t selling well. They want to move some trucks ...


View more: What Are the New 2023 GMC Sierra Incentives?

GMC’s Sierra 1500 pickup pushes further upmarket for the 2022 model year with the addition of the new Denali Ultimate grade, and we’ve just tested it. Buyers get all of the Sierra’s top-shelf products, along with much-improved trim options for the cabin, and handy driver-assist features for towing and ...

2023 GMC Canyon The 2.8-liter diesel is no longer available. With underbody cameras, lifted ride height with Multimatic DSSV dampers, and many other hardware upgrades, the new GMC Canyon is one very capable truck. One change over its predecessor that the customers may not be happy about, however, is ...


View more: GM Exec Explains Why Chevy Colorado And GMC Canyon Have Only One Engine Option

A recent GMC Terrain headlight recall affects over 700,000 SUVs GMC’s fix for Terrain headlights has some owners fuming Other Terrain recalls Headlights are easy to overlook but get everyone’s attention when they’re too bright. Several GMC Terrain model years are under recall for that very issue. But some ...

Are the 6.2-liter and 6.5-liter Detroit Diesel engines the same? When did GM add turbocharging? How can a new buyer improve the diesel engine’s performance? What else is wrong with these Silverado diesel trucks? The Detroit Diesel 6.5-liter GM engine first appeared in 1994 in the full-size GMC and ...

Or maybe to kill beasts… If there’s one thing your car collection likely is lacking, it’s an old hunting truck. You might be lying to yourself, saying your 2003 Ford F-150 with the tick of death qualifies since you hit Bambi with it back in 2007, shamelessly scooping the roadkill ...

2023 GMC Acadia AT4: Is This a Real Off-Roading Midsize SUV?

With New GMC Electric Truck, GM Is Looking to Take on the Full Lightning Range

GMC Now Has an EV Truck, Too, but This New Sierra EV Truck Has 754 (!) Horsepower

Up Close With the 2024 GMC Sierra EV Denali Edition 1