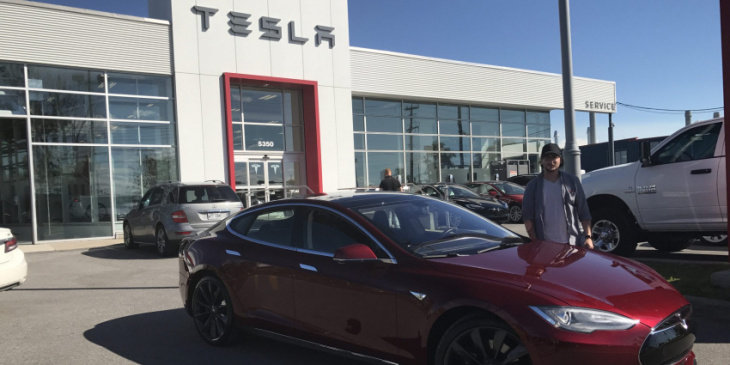 Tesla claims its used car business is “as big as some publicly traded used car retailers,” and it is expanding fast.

There are many things that separate Tesla’s business from other automakers, and its direct-sale model is one of the biggest, and probably the one that other automakers are most jealous of.

Tesla operates all of its stores, service, and delivery centers. It doesn’t use the third-party franchise dealership model.

This has a tremendous and obvious impact on its distribution and service organization, but it also has a less-known impact on how it manages used cars.

Operating its own dealership gives the automaker strong control over its used vehicles as owners upgrade or vehicles come off leases.

Tesla’s used car business is now so big that Jimmy Douglas, director of sales and delivery operations at Tesla, claims it is “as big as some publicly traded used car retailers”:

The executive is likely comparing it to companies like Carvana and AutoNation, which are worth between $4 and $6 billion.

It is impossible to confirm if Tesla’s used car business is worth that from public filings since the automaker files the business under “service and other” in its revenue report.

However, that line item is going up fast. It’s up more than 50% over the last year to $1.4 billion in revenue last quarter.

Tesla’s used car business would have an annual run rate of over $1 billion if it’s about 20% of that line item.

Douglas made the comment promoting a new job listing posted by Alex Liebl, manager of Tesla’s Used Car Quality, as the team is expanding.

They are distributed across North America, ensuring every used Tesla meets our quality standards, so we can delight every customer at the point of delivery. Since Tesla doesn’t advertise, delighted used car customers are our version of Super Bowl commercials.

While Tesla doesn’t advertise its used cars, it has the advantage of having great control over the inventory.

We previously reported that Tesla changed its policy to now prevent anyone from buying their car after their lease is over. This is increasing the automaker’s supply of used vehicles to resell.

At first, Tesla said that the move would be to build a fleet of self-driving cars. While that never happened, the move proved super successful because Tesla now has a lot of vehicles coming off leases, and used car prices are hitting all-time highs.