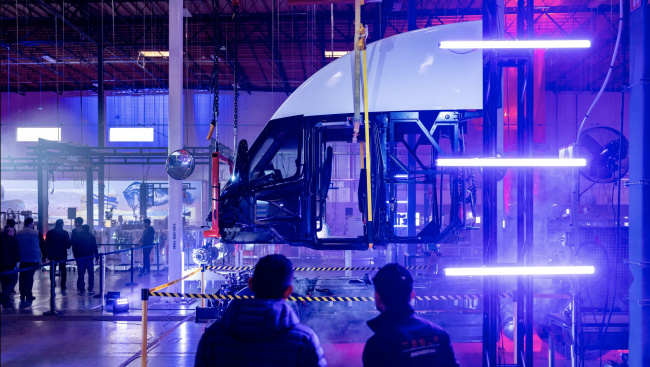 Nevada Governor Joe Lombardo discussed something notably interesting during his first State of the State address. While he discussed topics such as potential cuts to gas and payroll taxes and boosting public school spending, he also referenced Tesla’s reported plans for a $3.5 billion facility in Northern Nevada, which would be used for the production of the company’s Class 8 all-electric truck, the Tesla Semi.

During his address, Lombardo highlighted that the central focus of his economic and business strategy is to reposition Nevada as a state which supports businesses and development. The Governor noted that among the most promising avenues for growth in Nevada is providing incentives for developing and expanding new businesses and industries. Among these investments is a $3.5 billion facility from Tesla.

Lombardo noted that he would be joining Tesla CEO Elon Musk and the Tesla team on Tuesday for the unveiling of plans to build a $3.5 billion Tesla Semi facility in Northern Nevada, as per The Nevada Independent. The official did not indicate, however, if Nevada would be offering Tesla some tax breaks or similar incentives for the upcoming facility.

“Our best opportunities for economic growth are providing a pro-business environment for the 350,000 businesses that currently call Nevada home and offering a pro-development invitation for the expansion of new business. Whether it’s closing the lithium loop, unlocking innovation and investment in logistics, entertainment, science and technology, or embracing entrepreneurship, the message is that Nevada is ready to partner.

“Case in point… I am looking forward to joining Elon Musk and the team at Tesla tomorrow when they unveil plans to build a brand new $3.5 billion advanced manufacturing facility in northern Nevada for the company’s all-electric semi-trucks. Economic development matters. I’m proud to declare that Nevada is back open for business, effective immediately,” Lombardo said.

Tesla is already operating a facility to produce the Tesla Semi in Nevada. However, the facility, which is situated close to Gigafactory Nevada, is only producing low volumes of the vehicle. Considering that Elon Musk has noted in the past that Tesla is aiming for 50,000 Tesla Semi units in 2024, a facility that can produce the all-electric Class 8 truck en masse is definitely needed.

Nevada and Tesla have developed a close working relationship over the years. In 2014, then-Nevada Governor Brian Sandoval offered Tesla a $1.25 billion tax incentive package over 20 years to build a factory in the Northern Nevada area. Economic experts have credited the region’s successful handling of the pandemic to this economic diversification, which includes the presence of Gigafactory Nevada, a facility that produces 2170 cells for Tesla vehicles like the Model 3 sedan, among others.