Tesla Q4 Earnings is ‘one of the most important’ for Elon Musk and Co. 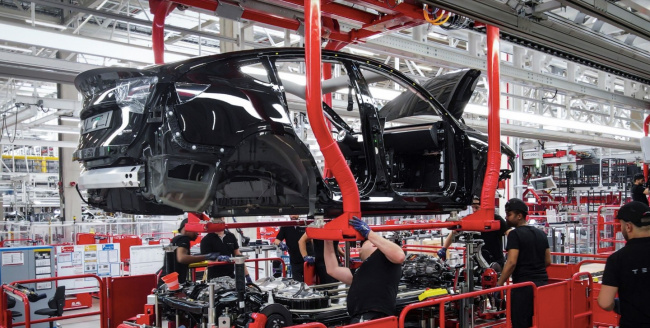 Tesla’s (NASDAQ: TSLA) fourth-quarter earnings call is being described as “one of the most important” for CEO Elon Musk and Co. by an analyst.

While every quarter is important for Tesla we would highlight tomorrow’s call/guidance commentary as one of the most important moments in the history of Tesla and for Musk. Delivery targets for 2023 (1.8 mm the bogey), Auto gross margins, and Musk commentary/outlook key tmrw

After delivering a million units in a year for the first time in 2022, with 1.313 million cars delivered globally, Tesla is still going to be looking for year-over-year growth.

“Over a multi-year horizon we expect to achieve 50% average annual growth in vehicle deliveries,” Tesla wrote in its Q3 2022 earnings shareholder deck. “The rate of growth will depend on our equipment capacity, factory uptime, operational efficiency, and the capacity and stability of the supply chain.”

This was a 40 percent increase from 2021 figures. However, it is not necessarily straightforward.

Tesla dealt with some production shutdowns last year in Shanghai, its biggest contributor to global manufacturing for the past two years. With ramp-ups continuing at Berlin, and products like the Cybertruck expected to launch this year in Texas, along with surges in demand thanks to price decreases, Tesla is sure to see growth this year. However, Ives seems interested in what Musk’s synopsis of the full year could be.

After Tesla cut prices globally by as much as $13,000 in the United States and 13 percent in other markets, consumers felt the positives as the cars became more affordable. However, from an investor standpoint, it is much more complicated.

Price cuts from Tesla were seen as a way to trigger global demand, which many analysts felt the company was battling against as more competitors entered the EV sector. However, Tesla had raised prices many times over the past two years due to supply chain issues. It seems, while the automaker was making so much per unit, consumers were still looking for an affordable yet competitive EV option from the company.

Perhaps the biggest question on the minds of Tesla investors, especially the company’s “permabulls,” is whether Musk’s attention will remain fixated on Tesla or Twitter. While his acquisition of the social media platform has seemed to take up much of Musk’s time, he has recently solidified that Tesla is the priority.

This has not alleviated the drop the stock felt last year, as Tesla shares dropped over 60 percent in 2022. Slightly recovering so far in 2023 with a 32 percent increase in value so far this year, investors will likely want to know what Musk’s overall plans are for Tesla, and what his potential level of commitment will be.

Many are still questioning how the CEO is splitting his time between the two companies. However, with Tesla expecting to ramp up several projects this year, including a new Semi production facility and the aforementioned Cybertruck, Musk could have his hand in more of the Tesla pie through 2023 than he did in late 2022.

Ives said in a note to investors:

“Tesla is Musk and Musk is Tesla. With all the worries about Musk’s attention on Twitter, selling Tesla stock, name a new Twitter CEO, and other noise created by this ongoing soap opera….this is a key moment of truth for Musk. Elon needs to give investors comfort around this tight wire balancing act and reiterate his goals for the year and lay out the strategic vision despite a near-term dark macro. Musk is not shy about his negative view of the economy, but how does that weave in with Tesla’s outlook? Also Musk giving some insight into the China situation, Twitter situation will be in the bright spotlight for the Street.”

Wedbush has a $175 price target and maintained its Outperform rating. The firm said it “ultimately believe[s] tomorrow’s call/guidance will be one of the most important moments in Tesla’s (and Musk’s) history.”

Keyword: Tesla Q4 Earnings is ‘one of the most important’ for Elon Musk and Co.