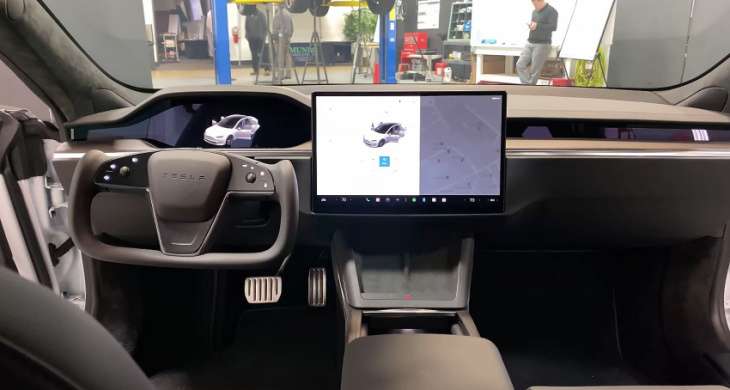 In the past, Elon Musk had generally waved off questions about the possibility of Starlink being used to connect Tesla’s electric vehicles to the internet. That’s not the case anymore, at least after SpaceX and T-Mobile announced a partnership that would utilize Starlink V2 satellites that are capable of transmitting directly to mobile devices.

With the partnership in place, Starlink V2 could usher in an era of connectivity with no dead zones worldwide. This immediately prompted questions from Tesla owners who inquired if the technology could be used for their cars as part of their premium connectivity package or for emergency calls and texts. Musk answered in the affirmative.

While Musk has confirmed that Starlink V2’s direct-to-mobile connection would be coming to Teslas, it remains to be seen if the service would result in additional charges for customers or if it would require a retrofit for existing vehicles. T-Mobile US chief executive Mike Sievert did mention that T-Mobile is planning on offering Starlink V2’s services to users on most of its existing plans for free, so Tesla may also implement something similar.

That being said, Elon Musk set some expectations on Twitter when he was discussing the capabilities of Starlink V2 satellites. According to the CEO, the next-generation satellite internet system could indeed eliminate dead zones worldwide, but connectivity would be around 2-4 Mbits per cell zone. This would make Starlink V2’s direct-to-mobile connections great for calls and texts but not enough for bandwidth-intensive tasks like streaming videos.

Note, connectivity will be 2 to 4 Mbits per cell zone, so will work great for texting & voice calls, but not high bandwidth

In a way, Musk’s comments bode well for the use of Starlink V2 for the connectivity of Tesla’s electric vehicles. The company currently charges $9.99 per month or $99 annually for its Premium Connectivity service, but that involves a cellular connection that’s fast enough to stream movies and play games. Starlink V2’s 2-4 Mbits speeds could then be added by Tesla free of charge, just as planned by T-Mobile.

The utilization of Starlink’s next-generation tech for Teslas would likely help the electric vehicle maker ramp its operations worldwide, even in countries where traditional cellular connectivity is still a couple of generations behind. It could also be a difference maker for Tesla’s more affordable vehicles in the future, which would likely be popular in countries where low-cost cars are preferred.

Starlink support for Ukraine will exceed $100M by end of year