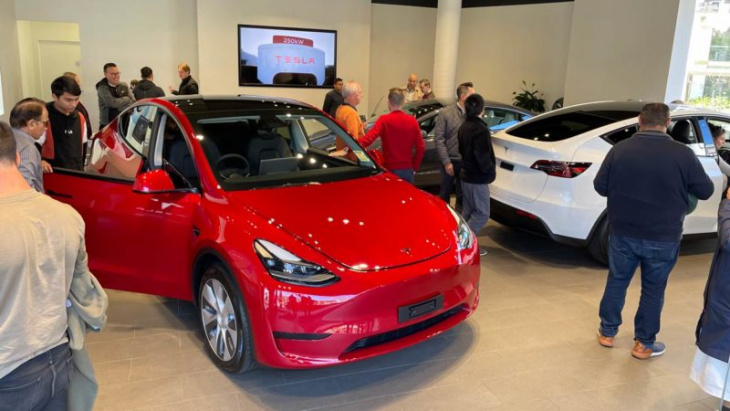 Huge interest in Tesla Model Y in June has not slowed down. Image: Bridie Schmidt

Tesla in Australia has had huge success with the launch of its spacious all-electric crossover SUV, the Model Y. Thousands have placed an order for one, and deliveries commenced in August.

And interest in the Model Y is not slowing down since orders opened in June, it would seem, with Tesla increasing the delivery times on new orders on Monday of the top-of-the-range Performance variant.

Tesla has updated its design studio in Australia to show April 2023 – June 2023 for new orders on the most expensive variant they currently have on sale in Australia.

This is up by two months whereas previously, it was February 2023 – May 2023. The base model RWD variant of the Model Y still has the same estimated delivery dates.

The New Zealand Tesla configurator shows earlier delivery dates for both the RWD and the Performance models of Tesla Model Y. The Model Y Performance is currently 3 months earlier than the updated Australian delivery date. There could be various reasons behind the earlier delivery date including demand differences for the Model Y Performance between the two markets, shipping availability, and a stronger EV uptake across the ditch.

With the recent upgrades to the Tesla Gigafactory in Shanghai that supplies all Teslas to Australia and New Zealand, the focus has been on the Tesla Model Y production.

Last month’s production data from Tesla revealed that over 74% of the EVs produced by Tesla in Shanghai were Tesla Model Ys.

This show the prioritisation of Tesla Model Y production and the wait times for existing Australian Tesla Model Y order holders are unlikely to increase.

Even with the increased wait time for new order holders, Tesla is still expected to ramp up its deliveries into Australia over the coming months. This would be positive for our EV uptake.