The Menlo Park Police Department showed off its Tesla Model Y at an employee appreciation event that was held yesterday. Police Commander, T. J. Moffett shared the below photo of the Tesla Model Y police cruiser noting that it was the newest fleet vehicle. He also said that he was eager for officers to work with the Tesla Model Y as the department continues to focus on decarbonizing. 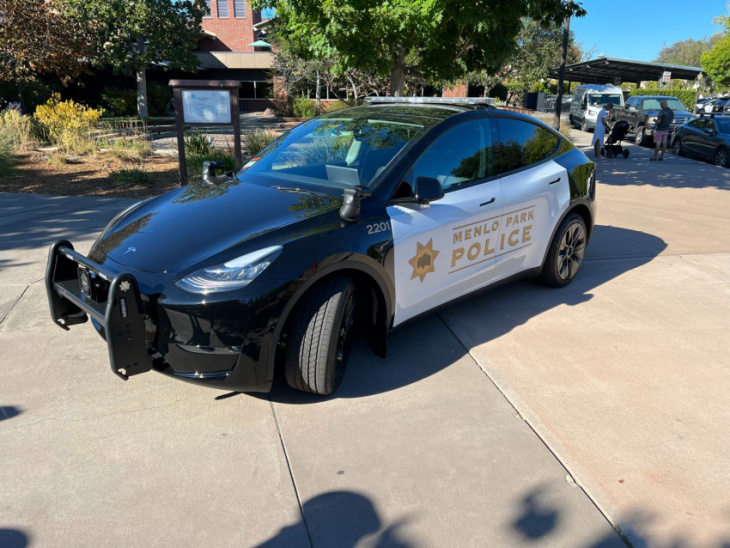 “I’m excited we were able to share our newest fleet vehicle with Menlo Park city employees yesterday during our staff appreciation event. I’m eager for our officers to put this Tesla through its paces as we continue our decarbonization efforts,” Commander Moffett wrote on LinkedIn.

Earlier this year, the Menlo Park Police Department purchased three Tesla Model Ys for patrol and has plans to have a fully electric fleet by 2030. Chief Dave Norris told KCBS Radio that the department wants to lead the charge and that having all of its vehicles electric by 2030 was important for them.

Since Tesla vehicles don’t have engines, the department needed to have the vehicles outfitted with ballistic shielding for worst-case scenarios such as a firefight.

“We need to bring these vehicles and get them ballistic shielding so that there’s a level of protection that we know that we can tactically get behind that vehicle in a certain way.”

As Menlo Park was showcasing one of its Tesla Model Y fleet vehicles, another police department made the decision to purchase Tesla Model Ys for its fleet. Boulder City, Nevada announced the new purchase noting that as a leader in energy production, it is now cutting down on fossil fuel consumption.

Your feedback is important. If you have any comments, or concerns, or see a typo, you can email me at johnna@teslarati.com. You can also reach me on Twitter @JohnnaCrider1