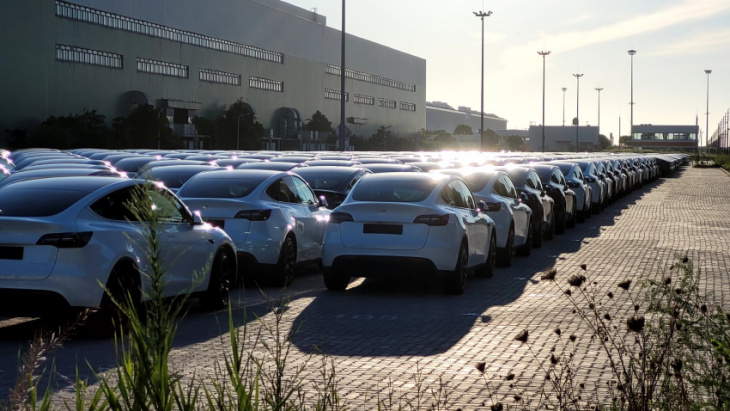 Tesla China is poised to focus its vehicle production on the domestic market, with recent drone flyovers taken at the Shanghai South Port Terminal showing that the electric vehicle maker is exporting what appears to be a final batch of cars. Considering the date of the flyovers, it appears that Giga Shanghai exports for the third quarter are being capped off.

Tesla China typically allots the first half of every quarter to exports, so in the first two months or so, cars from the factory are sent abroad. The volume of Giga Shanghai exports this quarter has been extremely impressive, with several fleets comprised of thousands of Teslas being observed at the Shanghai South Port Terminal since Q3 started.

The Glovis has just left the Shanghai South Port terminal and the Panama has taken over the transportation of Tesla. This quarter's Tesla exports are also nearing the end. @Tesla #TeslaShanghai #GigaShanghaihttps://t.co/Lw1pkhpiPn pic.twitter.com/e3rOnLh6gV

As noted by drone operator Wu Wa, who has been following the progress of Giga Shanghai since its earliest days, several transport ships have been sighted in the last few days loading Teslas from the port. In true Giga Shanghai fashion, the loading of the vehicles was accomplished efficiently, and by Monday, the drone operator noted that the port had already been all but emptied of Teslas.

This suggests that Tesla China is now focusing on vehicle orders from the domestic market. This bodes well for local EV buyers as Giga Shanghai just underwent upgrades to its production line this quarter. With the upgrades in place, expectations are high that Giga Shanghai will be able to produce about 3,000 vehicles per day. That’s enough to push Tesla China into yet another potential record-breaking month this September.

Giga Shanghai currently serves as the electric vehicle maker’s primary export hub, providing both Model 3 and Model Y units to areas such as Europe and Asia. By taking on this role, however, Giga Shanghai is only able to focus on the domestic Chinese auto market at the latter end of a quarter. Fortunately, this system would likely change in the future, especially as Tesla builds another production facility near Giga Shanghai that could pave the way for a run rate of a million vehicles per year or more.

Tesla China achieved some notable milestones lately. Earlier this month alone, the EV maker’s China division proudly announced that Giga Shanghai had produced its 1 millionth electric car. This is a notable milestone for a facility that only started delivering consumer vehicles in late 2019.