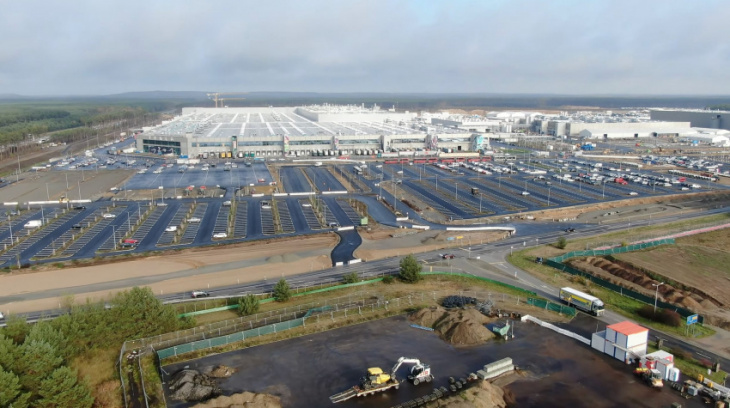 Recent reports from Germany have suggested that Tesla is now looking to independently search for water sources for Gigafactory Berlin, its Model Y factory in Grünheide (Oder-Spree). The electric vehicle maker’s efforts were reportedly met with strong criticism from local groups.

Tesla Giga Berlin is already producing Model Y crossovers, but it is only partially completed. This means that the facility is still intended to undergo expansions over the years, similar to Gigafactory Shanghai, Tesla’s EV Model 3 and Model Y plant in China. If Giga Berlin were to expand, it would likely need more water for its operations.

Tesla’s efforts were confirmed by Marlies Görsdorf, technical director of the Fürstenwalde water supply association. “Tesla is looking for suitable and productive groundwater supplies,” Görsdorf said, as per an rbb24 report.

As noted in a report from stern, Tesla’s efforts to independently search for water for Giga Berlin have met criticism from local environmental groups. This, while unfortunate, is unsurprising considering that some groups, such as the Brandenburg Nature Conservation Union (Nabu), have been consistent in their efforts to oppose the facility.

“We view Tesla’s efforts to develop groundwater resources ourselves with great concern,” Christiane Schröder, managing director of Nabu, noted. The group also argued that Tesla’s efforts would result in nature suffering from further water withdrawals, and the entire region’s drinking water supply will be put at risk.

In a statement to the media, Steffen Schorcht from the Grünheide citizens’ initiative also shared negative sentiments about Tesla Germany’s plans. “There is not enough water here. That would be a massive intervention in the water supplies of our region. Tesla is not allowed to pump water independently, nor expand the factory,” Schorcht said.

While the voices against Giga Berlin’s water consumption are notable, Tesla CEO Elon Musk has stated in the past that Giga Berlin would do what it can to make sure that it protects the surrounding environment.

“And that’s what they are about. And so anything we can do to make it better for the environment, we want to do that, because that’s the mission of the company. So if anyone has any advice, we’re very open to criticism and advice for what we can do better. So let us know,” Musk said.

Tesla Giga Berlin has faced a lot of opposition over the years, but it has continued to ramp up its vehicle production. As per recent estimates, about 7,000 workers are currently employed at Giga Berlin. Efforts are also underway to clear more forest to make way for the facility’s planned expansion.