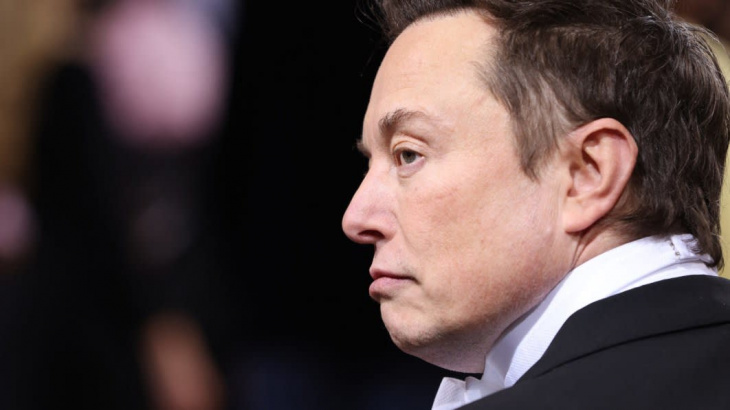 The survey, which Insider obtained and is publishing in full for the first time, was referenced last week in a lawsuit against the billionaire over his more than $50 billion compensation package.

Tesla’s former chief people officer, Gabrielle Toledano, sent the survey to Tesla board member Ira Ehrenpreis, who chairs the company’s compensation committee, on March 2, 2018. In her email, Toledano identified two key issues employees said they were facing: concerns over compensation and concerns about leadership at Tesla, particularly around Elon Musk.

“Review of employee survey results,” Toledano said in the email. “Not good on comp, esp from VPs, and not good on leadership, mostly about Elon.”

In the survey of Tesla professionals, managers, executives, and directors, a total of 65% of those polled said they trusted Musk and the executive team to “balance employee interests with those of the company.” 67% said they believe Musk and his executives “care about the company’s employees.”

A total of 58% of employees at the professional level or higher said they felt “fairly compensated” for their work. 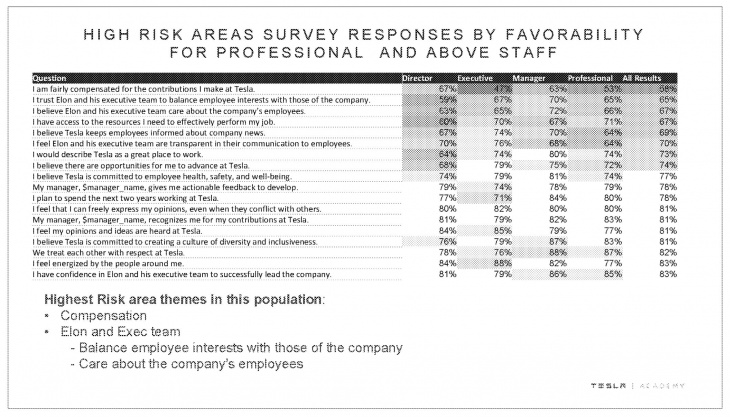 A selection of responses about Elon Musk and his executive team showed employees complaining about his company culture, leadership, approachability and communication, work timelines, and firings.

“Tesla is hemorrhaging highly talented, ferociously driven people who truly believe in the company’s vision and continue to hope for its success,” wrote one worker in the survey. “Elon is a technical leader of the highest order, and yet is widely seen as an unapproachable tyrant who devalues the contributions of the staff, and may fire them on a whim … we treat people, the fundamental unit of a company, like any other expendable resource.”

The worker added that Tesla “fails to distinguish between technical leadership and people leadership,” calling it an “ugly part of Tesla’s culture.” 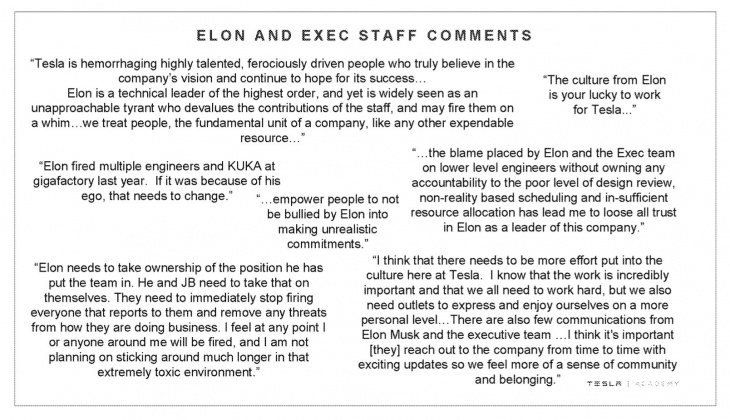 A screenshot of a page from Tesla’s 2018 employee survey, showing comments about “Elon and Exec Staff” Insider

Another worker wrote that they felt “at any point I or anyone around me will be fired,” saying they weren’t planning on sticking around much longer in an “extremely toxic environment.”

One worker said Musk’s “ego” needed to change, while another said people were being “bullied by Elon into making unrealistic commitments.”

In 2018, at the time the survey was taken, Tesla was struggling to scale production of its Model 3. Years later, Musk said Tesla was just weeks away from bankruptcy during the ordeal.

“Watching the crushing blow of the ramp and team demoralization of the Model 3 battery has been extremely disheartening,” one worker wrote in the survey. “More so the blame placed by Elon and the Exec team on lower level engineers without owning any accountability to the poor level of design review, non-reality based scheduling and in-sufficient resource allocation has lead me to lose all trust in Elon as a leader of this company.”

Despite several negative comments about Musk, 98% of surveyed employees indicated they were “proud of the impact Tesla is making in the world.”

The survey was cited last week during the first day of testimonies in a Tesla shareholder’s lawsuit against Musk over his pay package, which alleged Musk and the automaker breached their fiduciary duties by awarding compensation that was “beyond the bounds of reasonable judgment.”

The email was cited as potential evidence that the Tesla CEO was a “threatening” figure to Tesla staff, including the executives in charge of approving his pay package.

Musk and a Tesla spokesperson did not respond to a request for comment from Insider ahead of publication.

Last week, Ehrenpreis agreed in court that the quotes were “consistent with a long history of how some people felt.”

The billionaire has long been known for his intensity. At Tesla and SpaceX, he has pushed for lofty goals and has even been known to work as much as 120 hours a week and sleep on the factory floor. Former executives have said the billionaire can be a difficult person to work for, prone to bouts of anger and even instances of rage-firing employees — allegations he has adamantly denied, calling them  “false” on Twitter and saying he gives “clear and frank” feedback to employees.

Do you work at Tesla or for Elon Musk? Contact the reporter from a non-work email at gkay@insider.com