Tesla boss Elon Musk has handed over the first production versions of its Semi truck at a launch event in the US.

It’s been five years since Tesla originally revealed the huge electric HGV, and although production was meant to begin in 2019, the first examples didn’t roll off the production line until this October.

The truck was driven on to the stage by new Twitter boss Elon Musk at a launch event held yesterday evening (December 1) at the brand’s Gigafactory in Sparks, Nevada, where the vehicle is also produced.

Musk described its performance as an “elephant moving like a cheetah”, and promised three times the power of the next diesel truck.

Using a new 1,000-volt powertrain, which Tesla says will be developed further for other production models, it also packs a huge 1,000kWh battery, which the firm claims gives 500 miles when charged.

No price has yet been announced. 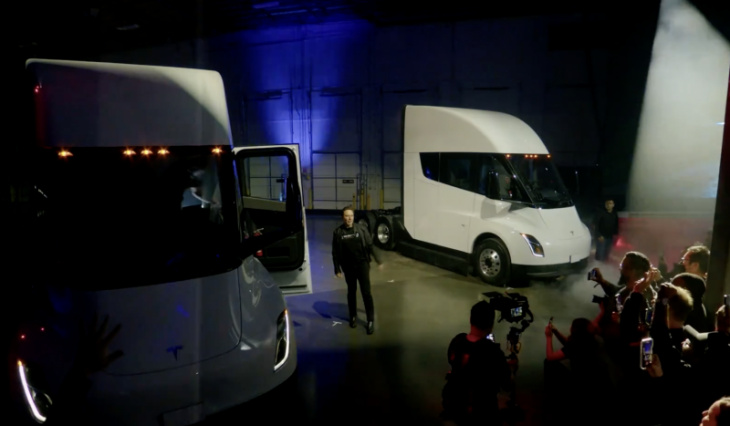 Tesla says the model has been ‘hardcore tested’ in a host of weather systems and environments, and that it will also be used by the firm as its delivery trucks. The brand showed a timelapse video of the truck completing a 500-mile journey as well.

During the event, Tesla announced that first deliveries had begun, with the initial examples being handed over to representatives of Pepsi. The food and beverage giant is said to have reserved 100 of the Semi trucks after the initial reveal.

Musk said: “It’s been a long journey, a long five years, but this is going to really revolutionise the roads and make the roads a better place in a meaningful way, so thank you for your support for all the years.”