Amidst news of a round of substantial price increases for the Model 3 and Model Y in China, Tesla quietly launched a revamped referral program. The company’s new referral program is quite unique as it takes the form of a “Treasure Box” that can provide various prizes for customers.

During the third quarter earnings call, Elon Musk announced that Tesla would be looking to achieve a record-breaking fourth quarter, one that could provide an “epic end” to 2022. For this to happen, Gigafactory Shanghai would have to produce and deliver large volumes of vehicles for both local and international customers.

Seemingly as a means to make its vehicles more attractive to domestic car buyers in China, Tesla implemented a number of price reductions on its two best-selling vehicles, the Model 3 sedan and the Model Y crossover, both of which are produced at Gigafactory Shanghai. Tesla’s price reductions were substantial, with some vehicles seeing a 9% adjustment.

But this is not all. As could be seen on the company’s official Weibo page, Tesla China has also launched a “Treasure Box” rewards system for referrals. As per the announcement, Tesla owners or prospective owners would have the opportunity to open a “Treasure Box” and acquire gifts for successful referrals. 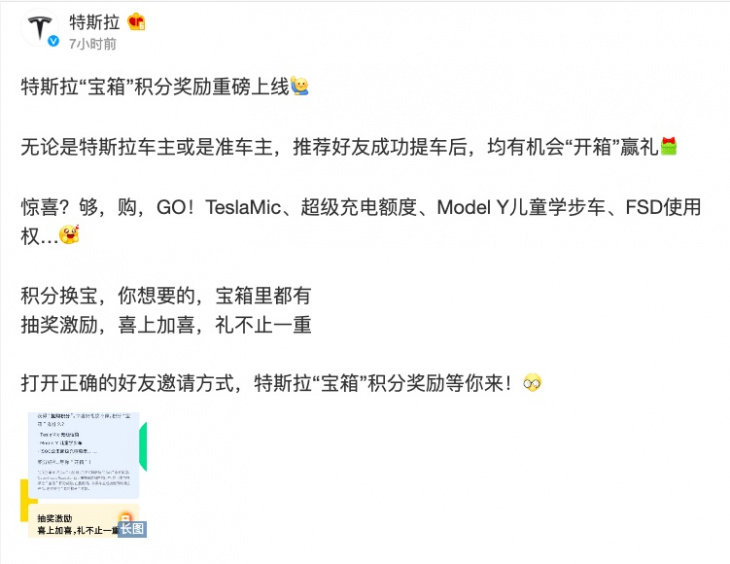 Tesla teased some of the potential rewards for the program, such as the TeslaMic, which is used for Caraoke, Supercharging miles, a “Model Y children’s walker,” and FSD use. The company also highlighted that some owners or prospective owners may be able to acquire more than one prize when they draw from the “Treasure Box.”

Signs that Tesla’s referral program was making a comeback have been abounding as of late, especially after a recent update to the Tesla Mobile App featured new strings that referred to redeeming referrals for Supercharging miles, official merchandise, and vehicle accessories. Seeing as a new referral program just launched in China, it would not be surprising if a similar initiative gets rolled out in the United States soon as well.