The battle for the dominance of the electric vehicle sector would likely be determined by the market’s key battery makers. With this in mind, companies such as BYD, CATL, and Tesla — all of whom are exploring the structural battery form factor — have the chance to become the trailblazers of the next generation of electric car batteries.

During its Battery Day event, Tesla announced its 4680 cells, which are used alongside the company’s structural battery pack. BYD, on the other hand, has also released its Blade batteries, which also adopt a non-modular approach. CATL’s Qilin batteries are in the same segment, with its structural battery design.

Electric vehicle battery enthusiast Jordan Giesige of YouTube’s The Limiting Factor channel recently conducted a comparison of the advantages and disadvantages of Tesla, BYD, and CATL’s next-generation structural packs. Each battery pack was evaluated according to several factors, such as design, rigidity, packing and energy density, and safety, before being ranked. It should be noted that the figures used in the comparisons are drawn from estimates and materials released by Tesla, BYD, and CATL themselves, not current real-world observations.

As noted by Giesige, Tesla’s 4680 structural battery packs utilize hundreds of cylindrical cells with a cooling ribbon in between every other row of cells. A lid is then placed on top and polyurethane foam is injected into the pack. This polyurethane hardens, and the combination of the foam and the battery cells forms a rigid, honeycomb-type structure.

CATL Qilin batteries, which could be fitted with both nickel and iron-based cells, integrate thermal pads, the liquid cooling plate, and the cross bracing to create what could be described as structural cooling. The structural cooling is placed between each row of prismatic battery cells, and the cells themselves are placed into the pack directly without any modules. BYD Blade batteries use iron-based prismatic cells, though these cells are longer and thinner than those used by CATL. The cells are then stretched across the BYD Blade battery pack, allowing the cells themselves to replace conventional steel beams.

In the rankings of the next-generation batteries, the YouTube host noted that Tesla’s 4680 structural battery pack would likely be the most rigid among its peers. Tesla’s 4680 pack loses out in terms of packing density, however, as BYD and CATL’s use of prismatic cells maximizes volumetric energy density. With this in mind, and considering that CATL’s Qilin batteries can be fitted with high-energy density nickel-based cells, a nickel-based Qilin battery would likely be more energy dense than a nickel-based Tesla 4680 pack or a BYD Blade structural battery, which uses less energy dense iron-based cells. 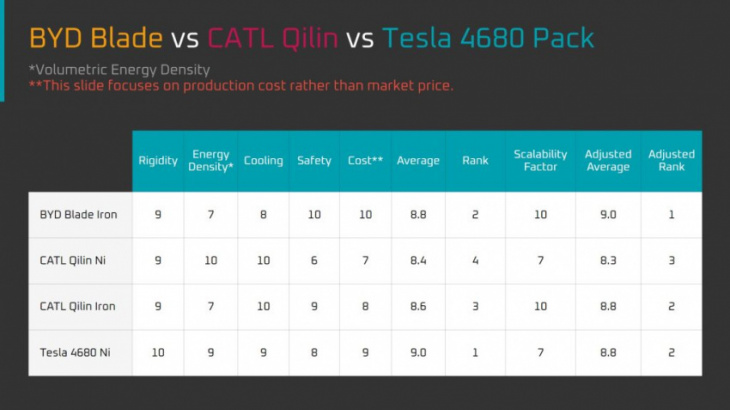 As for cooling, Giesige noted that the BYD Blade batteries’ plate cooling would likely fall short of the Tesla 4680 pack and CATL Qilin battery’s cooling systems. In its marketing materials, CATL highlighted that cooling the sides of the Qilin battery increases the pack’s cooling area four times. Tesla’s 4680 battery also uses better cooling than BYD’s Blade batteries with its side cooling system, though it would likely not be as good as the cooling of CATL’s Qilin structural packs.

While BYD’s Blade batteries lose out in cooling, they are, likely the safest among its peers. This is because the BYD Blade battery uses iron-based cells, which have a higher decomposition and lower heat release temperature than the nickel-based cells used in Tesla’s 4680 cells and CATL’s nickel-based Qilin batteries. An iron-based Qilin battery comes second to the BYD Blade, partly due to its use of shorter and thicker prismatic cells, which may trap more heat. 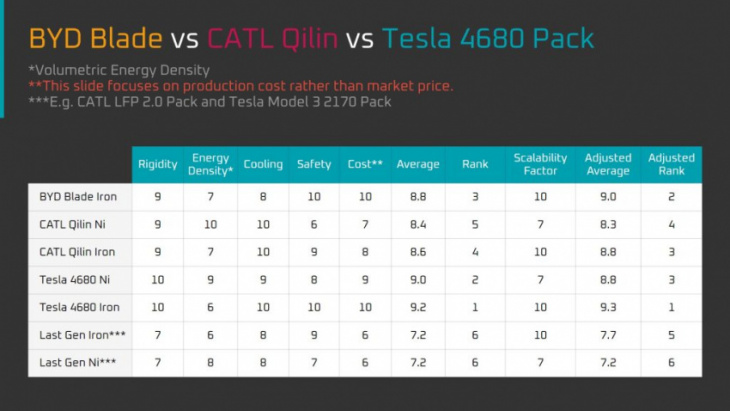 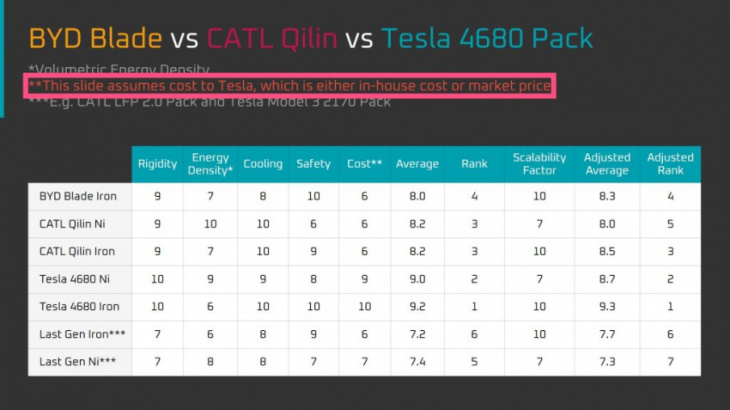 A Qilin pack with nickel-based cells was ranked last in terms of safety by the battery enthusiast, as Tesla’s 4680 pack with nickel-based cells features several safety systems, such as an overpressure mechanism on the bottom of the cells themselves. Since 4680 cells are also smaller than the prismatic cells used in the BYD Blade and CATL Qilin, they contain less energy. The 4680 cells themselves are enclosed in a thick shell as well, which are about 2-3 times thicker than a conventional battery.

Overall, Giesige noted that Tesla’s 4680 cells are likely the best all-rounder compared to its peers in the structural battery segment. The overall scores of the BYD Blade and CATL Qilin batteries bode well for Tesla’s future, however, as the companies could become suppliers of the EV maker in the future. CATL is already supplying Tesla with LFP batteries today, and BYD is heavily rumored to be a Tesla supplier as well. In a way, the analysis of the next-generation structural EV batteries shows that Tesla is not alone in pushing the battery industry forward.

Watch The Limiting Factor‘s full analysis in the video below.

Yet another week is passing, and it was loaded up with fascinating EV news that's worth sharing with the world.