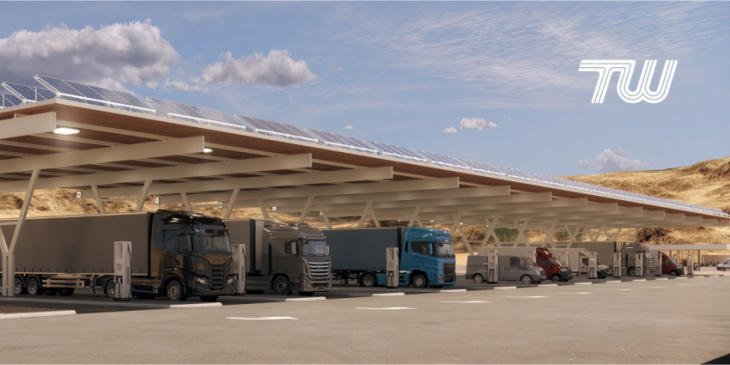 A charging infrastructure start-up in the USA is attracting attention with a funding round of more than one billion dollars. TeraWatt Infrastructure builds and operates charging hubs for electric vehicles from cars to trucks.

The company was founded in May 2021 and is led by CEO Neha Palmer, who was most recently responsible for the energy strategy for Google’s global data centres. TeraWatt acquires real estate in locations strategically relevant to fleets and develops the energy and charging infrastructure required to operate light, medium and heavy electric vehicles on a large scale. TeraWatt’s charging centres offer reservable spaces for fast charging of commercial electric vehicle fleets.

In its seed funding, TeraWatt had already raised $100 million from investors Keyframe Capital and Cyrus Capital. In the Series A financing, both investors have now increased their participation in the start-up, and funds managed by Vision Ridge Partners have also joined in a big way. The exact investments and holdings are not named in the announcement, however.

“The future of electrified transport is at a critical inflection point, whereby solutions for large-scale EV charging infrastructure must be established to meet the increasing demand for electrification of all fleets,” Paul Luce, managing director of Vision Ridge Partners, says in the announcement.

Speaking to US portal TechCrunch, TeraWatt CEO Palmer announced that in the coming weeks they will “announce the largest and most ambitious charging project to date for the electrification of long-haul transportation along a major highway corridor”. The company also plans to grow rapidly after that: “We plan to more than double the number of new employees over the next year to fulfill needs across charging operations, real estate, sales, marketing and more,” the manager said.

When developing new sites, TeraWatt looks not only at potential traffic flows, but also at the availability of electricity. According to Palmer, part of TeraWatt’s strategy is to start the development process early enough to work with utilities from the beginning. “To be clear, grid capacity will be an issue for the entire industry, and for many industries as the ‘electrify everything’ transition continues,” Palmer told TechCrunch. “There will have to be a lot of collaboration between stakeholders, including grid owners, operators, utilities, regulators and end users to ensure that the grid can evolve alongside the shift to electric transportation.”