Tech Deep Dive: What Makes the New Porsche GT3 RS the Most Extreme 911 Ever

Porsche’s Andreas Preuninger explains everything you need to know about this latest track special. 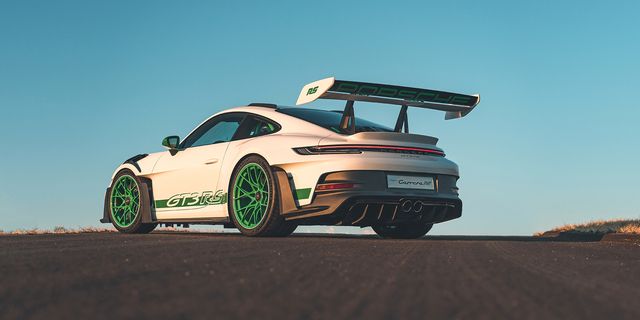 Porsche Motorsport doesn’t want to get rid of its 4.0-liter naturally aspirated flat-six yet. Nor should it; it’s one of the finest automotive engines ever produced. But there’s only so much power that can be extracted from it while meeting increasingly tough emissions standards. So how do you make a car like the 911 GT3 RS markedly faster than its predecessor while making the same amount of power? You focus on increasing grip. 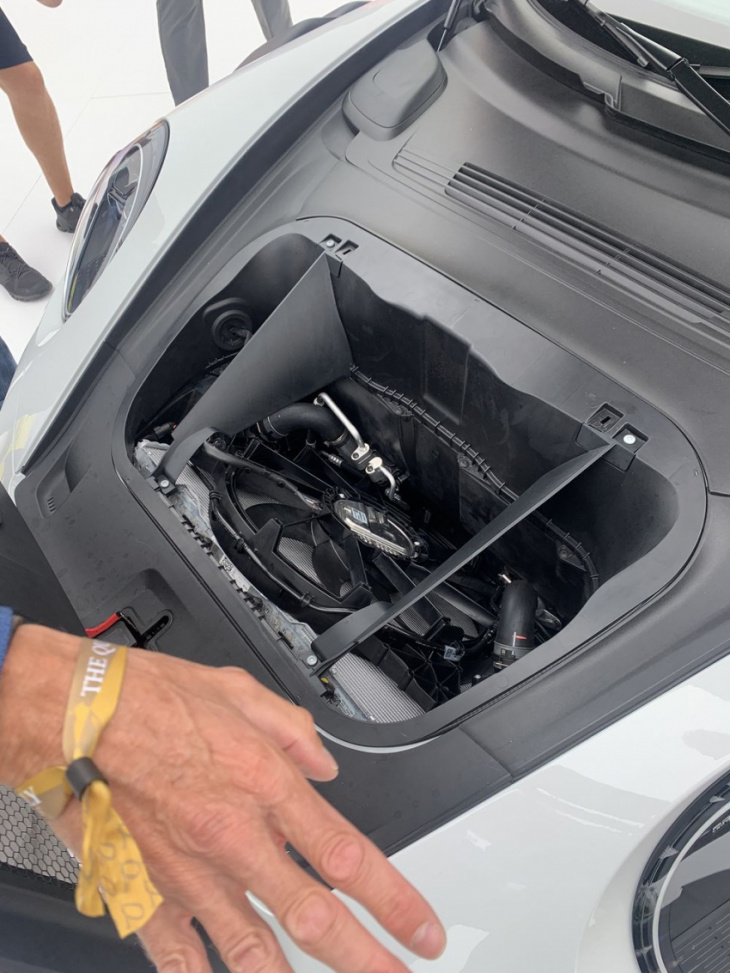 Andreas Preuninger shows us what’s under the front hood of the new GT3 RS. A small plastic piece with mesh grilles covers the opening.

At the debut of the new RS last week at the Quail, Andreas Preuninger, head of GT road cars at Porsche Motorsport, took us around the new car. The new 992 GT3 RS has arguably the most extreme aero package this side of a McLaren Senna, as far as road cars are concerned. Unfortunately, it comes at the expense of having a front trunk, because downforce is far more important than luggage space. Instead, there’s a radiator canted forward similar to what’s used on modern 911 race cars.

“The mono-cooler concept is the enabler,” says Preuninger. “It’s easy to produce downforce on the rear, because you just put a big wing on it, but you have to bring the car back to balance. The 911 is always very difficult to get the downforce at the front, and so we needed aero modules with electromechanically operated flaps where the side radiators normally sit. So they had to go.”

These movable flaps look like small wings, though Preuninger describes the whole package as a front diffuser. “We use a wing to modify the diffuser shape,” he says. The wings are adjusted by specially developed brushless electric motors which can rotate a maximum of 80 degrees in 0.3 seconds. Angle of attack is infinitely adjustable, working in concert with a new bi-plane rear wing that has a hydraulically adjustable top section. There’s even an F1-inspired drag-reduction system (DRS), activated by a button on the steering wheel that automatically puts the car in its lowest-downforce configuration. Preunigner says the effect is very noticeable at high speeds, but you won’t need to hit the button on track because the car will automatically adjust the downforce level as needed. 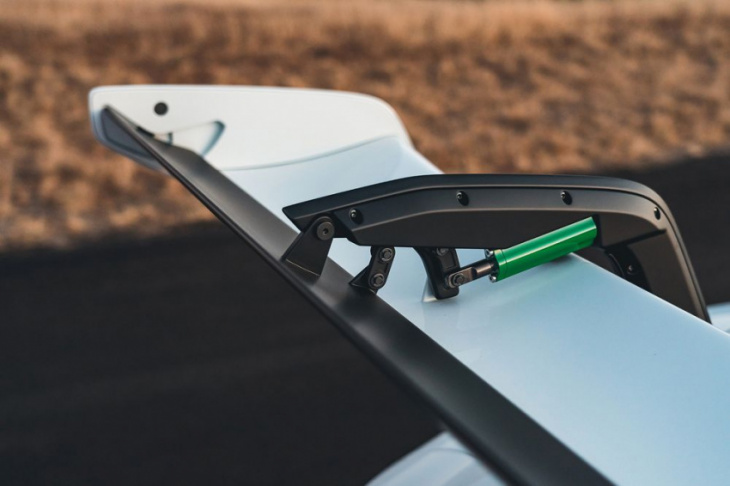 The front diffuser wasn’t quite enough to achieve what Preuninger says is the ideal aero balance of 70 percent rear, 30 percent front. Instead of resorting to things like dive planes, which add drag and increase frontal area, Porsche opted to develop new hydrofoil-shaped components for the front suspension, which Preuninger says contribute to an 88-pound increase in downforce. 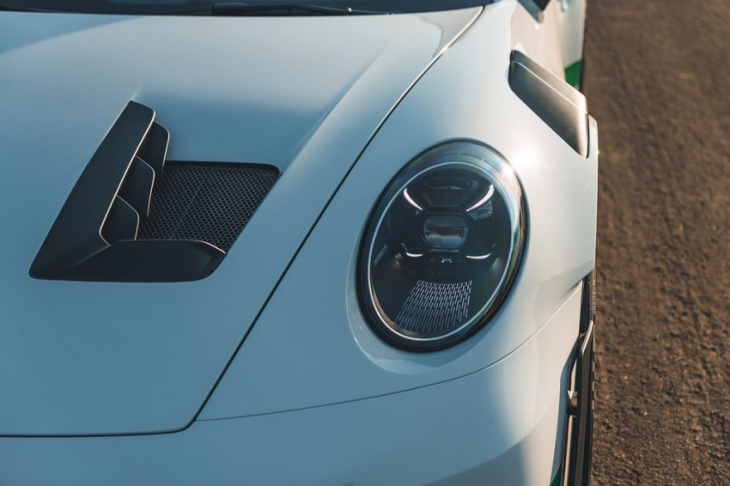 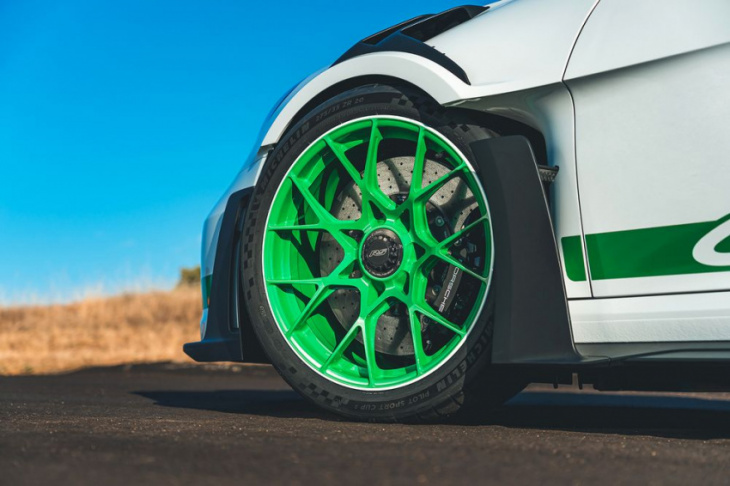 Other neat aero details abound. The vents in the hood are designed to get the hot air from the radiators as far away from the car as possible, and there’s a funny side-effect of their use. Preuninger tells us that there’s always hot air rushing by the car, so you can drop the windows in winter without getting cold. Helping vent pressure from the wheel wells are new upright vanes behind the tire that create an air channel with the dramatically sculpted bodywork. The channel behind the front wheels required a new door, which is made from carbon-fiber-reinforced plastic (CFRP), which not only saves weight, but is far cheaper than making a new door from metal. This also gave Preuninger an excuse to bring back the fixed door handles of the 991, which he prefers over the 992’s retractable units. “I just like it better,” he says. “Old school, but old things are the things we’re used to for a reason. Because they’re good, because they work.” 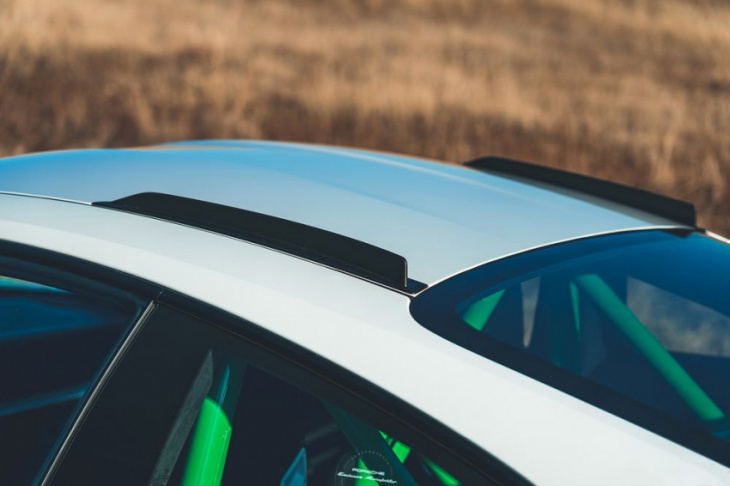 On either side of the roof (which is also made from CFRP), are two fins that help keep the hot air rushing down the side of the body away from the intake on the engine cover. Preuninger says these components contributed to an increase of 20 horsepower in testing. The last two iterations of GT3 RS also used intakes ahead of the rear wheels to feed the engine, though now, this is just a vent to reduce drag.

At 124 mph, the GT3 RS is capable of generating around 900 pounds of downforce, and at 177 mph—the speed achieved on the Nürburgring’s long Döttinger Höhe straight—that figure jumps to an astonishing 1895 pounds. For context, the new GT3 RS is capable of making twice as much downforce as its predecessor, and three times as much as the current GT3. One of the great road-going aero monsters, the Dodge Viper ACR, made over 1700 pounds of downforce at 177 mph, while the McLaren Senna made 1775 at 155 mph. Porsche says these figures put the new GT3 RS on par with a GT3 race car. Its ability to cut drag on the fly should make it even faster flat-out. 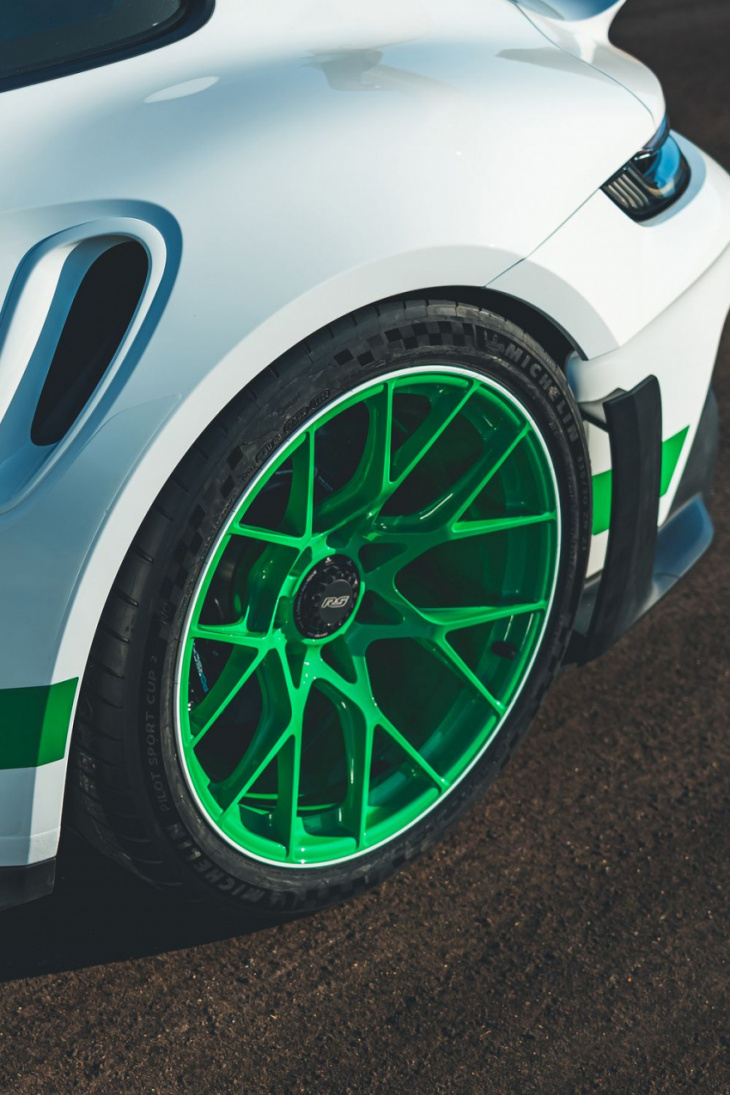 This increase in downforce requires a very different approach to suspension setup. You don’t want too much pitch or dive in a car making high downforce, as that can change the center of pressure dramatically, leading to instability. There’s more anti-dive geometry in the front suspension, and Preuninger says that as a result, the car only pitches 5 mm forward under max braking from top speed, compared to 12 mm with the GT3.

Of course, creating a stable aero platform and dealing with such immense downforce usually means a very stiff car. Spring rates are up 50 percent at the front and 60 percent at the back, but Preuninger says it’s surprisingly still livable. “You wouldn’t believe how good that car feels on the road, which is, I have to confess, a totally byproduct because it was not the intention,” he tells us. “For me personally, it’s in the same league as a GT3. Maybe on some roads it’s even better.” That, he tells us, is thanks to bigger tires, the biggest ever fit to a 911. The GT3 RS now uses 335/30R21 rear tires and 275/35R20s at the front, which in addition to providing a wider contact patch, bring a slight increase in sidewall height. Preuninger is also very proud of the rear wheels, which measure 21×13. 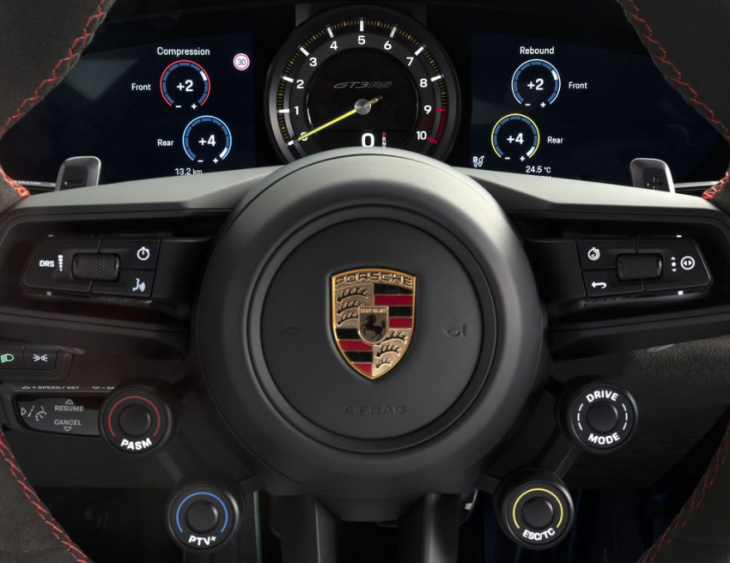 As with the last few generations of GT3 RS, the 992 uses adaptive dampers, but their adjustments are unlike anything ever seen in a road car. Preuninger admits he was jealous of competitor’s cars that had dampers with user-adjustable compression and rebound settings, and he wanted the same for the new RS. “But then I saw the people that had such cars on the paddock, lying in the grease and then fumbling around and coming back after two laps frustrated, getting back underneath the car,” he says. “That’s a bad deal. We have to make this accessible in real-time.” So, when you press the Porsche Active Suspension Management (PASM) button on the steering wheel, you can then use the four knobs to adjust rebound and compression settings for the front and rear separately. Porsche will provide no default damper settings, as each driver and each road surface has different requirements, but there’s not so much adjustment that you can make the car undrivable.

Those four knobs serve multiple purposes. There’s an adjustment for differential settings, and controls for a new seven-stage traction control system in addition to the expected drive-mode selector. Preunigner says that it takes him around a half-hour to come up with his ideal settings on a new track, and encourages drivers to play around to figure out what they want. “You find out pretty easily,” he says. “It’s not some super, super complicated science. You have to just give yourself the time to feel it out.” Once you find your settings, Preuninger explains it’s better to not tweak things too much. That’s what the pros do, anyway.

While most of the focus was on chassis and aero, Porsche didn’t leave the engine alone, either. Preuninger wanted to ensure that the RS had a bit more power than the GT3, and was even with its predecessor, despite tougher emissions standards. The familiar 4.0-liter gets new cylinder heads, new throttle bodies—one for each cylinder—a new intake, and new cams with a longer duration. This “old-school hot-rodding,” as Preuninger terms it, led to 518 hp, two fewer than the 991.2 GT3 RS, but this engine should feel different. From 6000 to its 9000-rpm redline, Preuninger says it’s “even more ferocious.” There are some tweaks to the lubrication system for the seven-speed dual-clutch gearbox, too, and a shorter final drive compared to the GT3, but Preuninger says they’re already at the maximum achievable shift speed, so there wasn’t much to change. 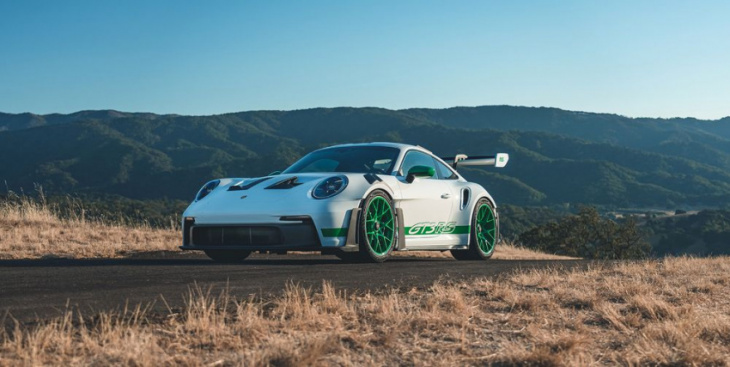 A Nürburgring run will have to wait until next month or October, as the Ring requires an automaker like Porsche to book the entire track for an attempt. Preuninger doesn’t mind though, as the cooler weather means the engine will breathe even better. Right now, it’s anyone’s guess about what sort of time it’ll do, but note that the GT3 ran a 6:55.2 and the old GT3 RS did a 6:56.4 around the 12.8-mile “Sport Auto” configuration of the Nordschleife. (The official Nurburgring timing method includes the entire T13 straight, which adds a few seconds to the lap. Because this timing method was implemented recently, it’s hard to draw a comparison to older lap times.) Expect the new RS to dip into the 6:40s easily.

Road & Track editor-at-large Travis Okulski says that auto engineers always do their best work when boxed in. Here, Preuninger and co. couldn’t simply just stick a bigger engine in a GT3 RS and pat themselves on the back. Making a faster car with the same horsepower took a lot of creativity, and the result is a car more extreme than most expected, and if the Porsche GT department’s recent track record is of any indication, it should be a riot.

Keyword: Tech Deep Dive: What Makes the New Porsche GT3 RS the Most Extreme 911 Ever

Everrati has added the convertible version of the 964-generation Porsche 911 to its growing fleet of electric conversions. But rather than stick with the regular body, Everrati also added the car’s wide-body design for some extra drama, not to mention extra performance. With up to 500 hp available, wide ...

The new feature is being rolled out in Germany, with other countries to follow.


View more: Porsche Configurator Now Allows You To Spec Your Car And Order It Online

What company created this car paint job? How was this car paint job created? How can a brush-painted finish be so smooth? Is the cabin modified? At first, it is hard to imagine someone painting a 2018 911 Porsche Turbo with a brush, but that’s what you’re looking at. ...

What is it? What’s its superpower?  Let me guess, it’s got monster power too? Presumably some lightweighting has occurred? What about the way it looks? What's the verdict? What is it like to drive? The conditions? That sounds hugely complicated. Did the track dry out? And the brakes? And ...