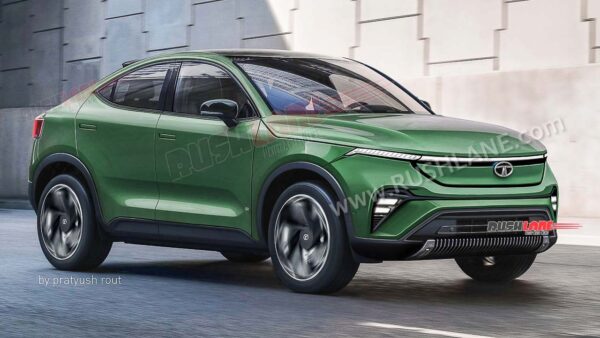 Though some car manufacturers are still in two minds about the future being electric, not Tata Motors. India’s leading electric car maker already has great plans for the future, and they are all electric. They gave us a glimpse last month of what is in store.

April 2022 saw Tata Motors unveil two electric car concepts. First being Curvv and the second being Avinya. Of the two, it is Curvv which is closer to production. Launch of Tata Curvv electric is expected in 2024, while that of Avinya is expected in 2025.

Tata Motors has been busy filing new names. Though not all that is trademarked gets launched or is showcased as a concept, some do. For example, a few days before the unveiling of Curvv, Tata Motors had filed a trademark for the name. Along with Curvv, they had also filed Sliq. But we are yet to hear anything about Tata Sliq.

Now, the latest update from trademark filings is that Tata Motors has filed 4 new names. These are – Tata Styzor, Tata Bovita, Tata Auroar and Tata Xiomara. These names were filed by Tata Motors Passenger Vehicle division. It is highly likely that these are the names of their upcoming electric cars. 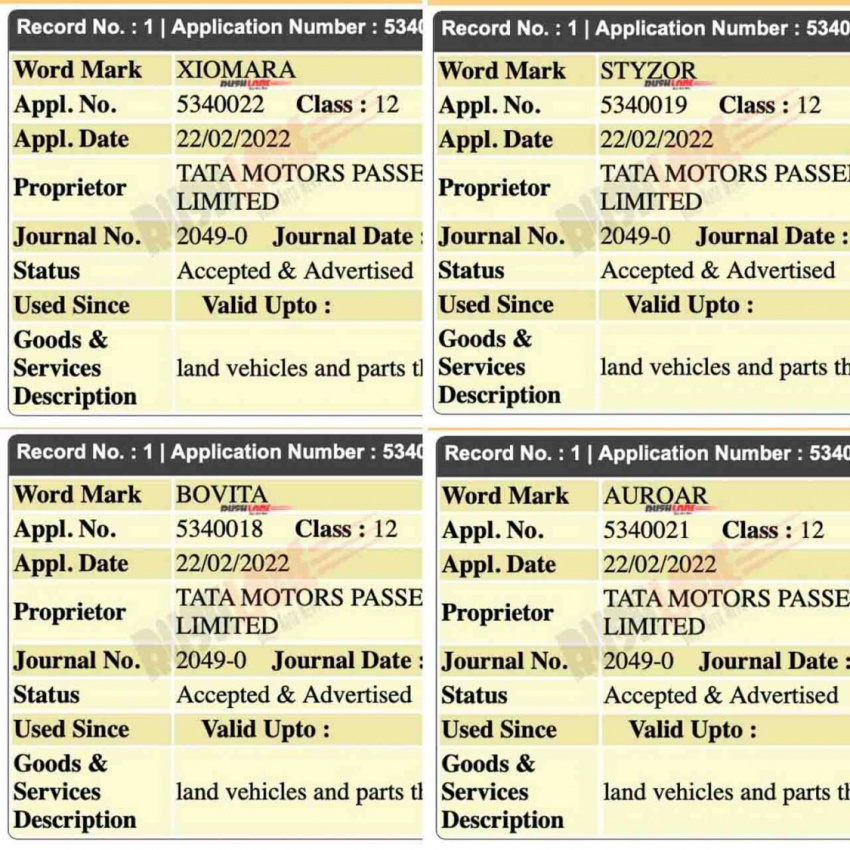 It is anybody’s guess what these new Tata car names could become in the future. What we do know is that Curvv will become the first car from Tata Motors to be launched with an electric powertrain first. Until now, Tata Motors launched the petrol / diesel ICE option first, and then modified these to get fitted with electric motor and battery. We saw this happen with Nexon as well as Tigor.

That will not be the case with Curvv. It has been designed from the ground up to be an electric car. It will also be launched with a petrol / diesel engine option at a later date. But first, it will be launched as an all electric car. There are no plans to launch Curvv as a hybrid.

After this, comes the Avinya concept. Current crop of Tata electric cars are referred to as Gen 1 EVs. Gen 2 will be Curvv, and Gen 3 will be Avinya. In the current scheme of things, Avinya will be the pinnacle of Tata Motors’ EV tech. It will come with advanced autonomous driving tech like the one seen on Tesla. Tata Avinya platform is flexible and can spawn into SUVs, sedans / estates, crossovers, etc.

Tata Motors has had a great start to the year 2022. From breaking their own sales record to launching new cars, the Indian car brand is getting close on becoming the 2nd largest car maker in the country. With demand rising, and plans to launch multiple new cars, Tata Motors is all set to take over Ford India plant in Sanand.

Tata Motors currently sells three electric cars Nexon EV, Tigor EV and XPRES-T. Total orders stand at an average of around 5,500-6,000 units each month. Tata Motors, currently operating at 85 percent capacity at its existing PV plants, seeks to commence production of its electric vehicle lineup from the Ford factory with a target of between 5-6 lakh cars in FY 2023. The automaker also has plans to invest an additional Rs 2,000 crores into this plant for the manufacture of 2 lakh electric vehicles by 2026. 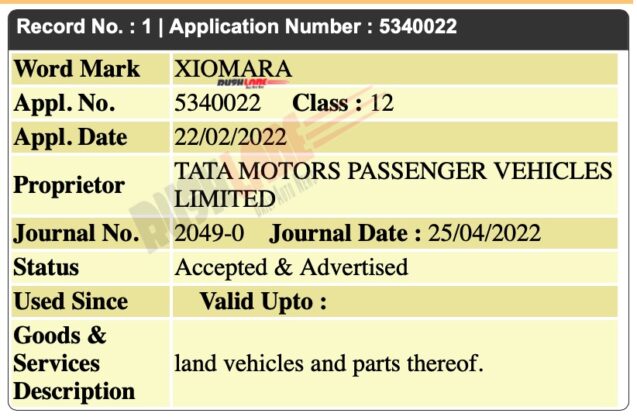 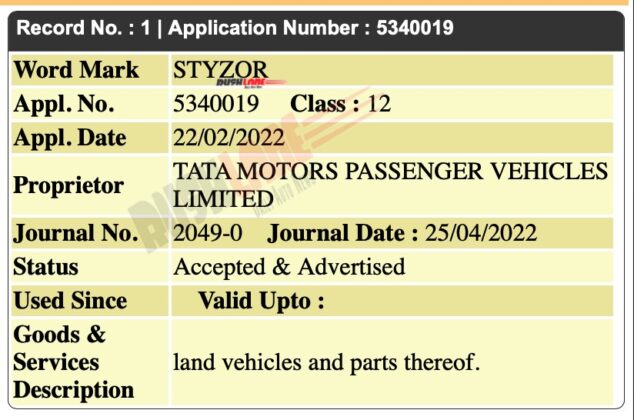 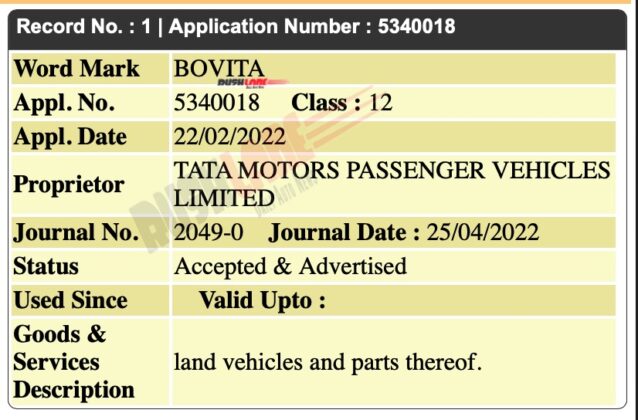 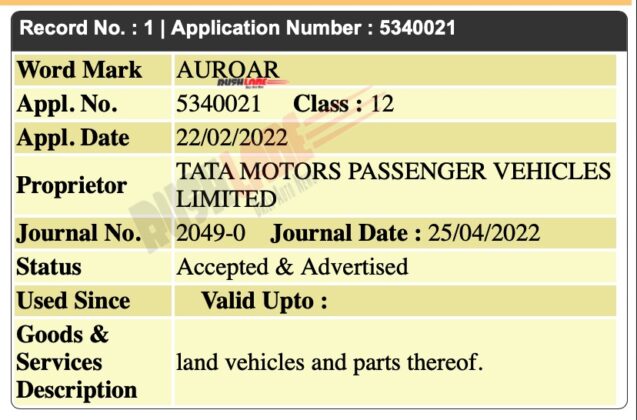 The Ford Fiesta Had to Die so More EVs Could Live

Do today's cars feel as robust & long lasting as the ones sold before?

Problem #1: Transmission Shift Quality Issues Problem #2: Check Engine Light Due to Failed Thermostat Problem #3: Power Window Not Working The reincarnated four-door Dodge Charger has been around since 2006, so the automaker has had plenty of time to fix any mechanical issues, making it a relatively reliable ...


View more: 3 Most Common Dodge Charger Problems According to Hundreds of Owners

Buick Is Dying in America, but China Loves Buick — Here’s Why


View more: Buick Is Dying in America, but China Loves Buick — Here’s Why

1 Swedish Wagon Is the Best Supercharged Car According to TrueCar


View more: 1 Swedish Wagon Is the Best Supercharged Car According to TrueCar

What’s new in the 2023 Civic? What is the cheapest model Honda makes? What are the features of a 2023 Honda Civic? Is the Civic Honda’s most fuel-efficient model?  What problems do Honda Civics have? The Honda Civic is a staple in the compact car market. Fans revere Honda’s ...

Check Out the 5 Cool Cars These A-List Celebrities Drive


View more: The Most Expensive Car in The World is One-of-a-Kind

Audi R8 V10 Vs. V8 Pricing Can I Drive a Used Audi R8 Every Day? Which Used Audi R8 to Buy If you’re like many of us, questions like ‘how much is a used Audi R8?’ pop into your head more often than you’re proud of. If it is ...

What Kind of Terrain and Tracks Does Consumer Reports Test Cars On?

How Much is a Fully-Loaded Toyota Crown?

Ugly Cars: These Puppies Aren’t so Ugly That They’re Cute

How Getting Stuck in the Snow Can Ruin Your Car

How to Bleed Your Brakes?

Why Is It Harder To Start Your Engine in the Winter?