It was announced earlier today that the five-time Bathurst 1000 winner had declined an endurance driver contract extension with T8.

His new home has swiftly been revealed, with Tander signing on with Ford squad Grove Racing for the 2023 Sandown 500 and Bathurst 1000.

The Blue Oval move is significant given that Tander is among the legendary Holden drivers from the modern era.

While he tested Ford Supercars hardware before landing his first race seat, he has been loyal to the Holden brand ever since debuting with Garry Rogers Motorsport in 1998.

He last raced a Ford-powered car when he won the Australian Formula Ford Championship the previous year.

As a Holden driver he won a Supercars crown for the factory-supported HSV Dealer Team in 2007 and five Bathurst 1000s, including three as a full-blown factory Holden driver.

The first two were in 2009 and 2011 during his stint with the famous Holden Racing Team, the last coming in 2020 for Triple Eight, in what was the final appearance for a factory Holden team at Mount Panorama.

As part of this Grove Racing deal, Tander’s son Sebastian Tander will join the Grove Junior Team for a tilt in the Australian Kart Championship next year.

Tander Senior, meanwhile, will also have a mentoring role within the Grove Junior programme working with the likes of karter Mika LeMasurier and Porsche Sprint Challenge driver Oscar Targett.

Tander will also mentor former Grove Junior Matt Payne, who will step up from Super2 to the main game alongside David Reynolds next season.

Tander will have plenty of familiar faces to work with, with ex-Triple Eight engineers David Cauchi and Grant McPherson now at the Grove squad.

“I’ve been fortunate enough to work in some great race teams in Supercars. What I have seen [owners] Stephen and Brenton Grove achieve in a very short time frame is seriously impressive,” said Tander.

“When they asked me to be part of what they are building for the future, not only as a driver, but also to help mentor Matt Payne, who has already proven to be an immense talent and also help guide the Grove Junior Team it was something that grabbed my attention. 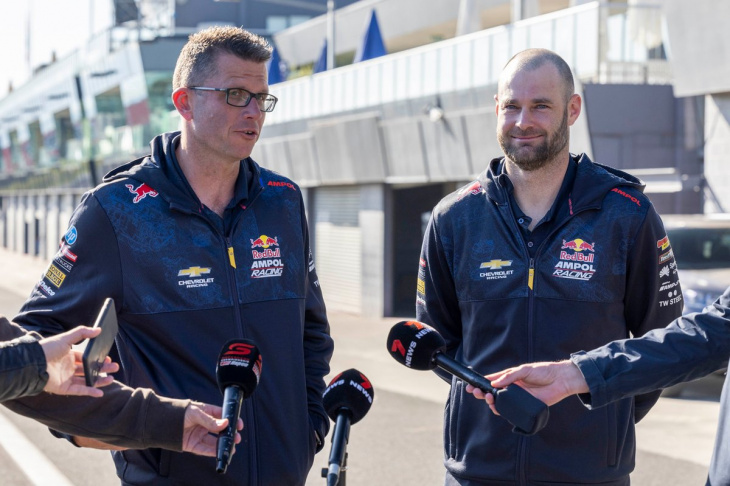 “I have worked closely with many within the team in the past, having worked with Alistair McVean, David Cauchi and Grant McPherson already, as well as a teammate to Dave Reynolds way back when he was a little tacker.

“Something big is being built here and I am honoured to be part of it.

“With the imminent arrival of Gen3 coming in 2023, I am excited to get started and help the team wherever I can.

“I would also like to thank everyone at Triple Eight Race Engineering for the last four years. To have the opportunity to win Bathurst in 2020 and 2022, with [Shane van Gisbergen], added another chapter to my career and that’s something I am very grateful for.”

Stephen Grove said both generations of Tander would be an ideal fit for the team.

“We identified the need for an experienced driver to work hand in hand with Matt in his first year,” he said.

“Garth was the obvious choice given his proven race winning pedigree and experience in developing race winning cars and teams.

“On top of that, we understood the need to bring a calculated driver into the fold to assist with the development of Gen3 in the early stages of the season, as well as the opportunity to take the best possible driving line-up into Bathurst.

“Sebastian has been incredibly fast this year and had been on our radar for a while. With Matt graduating into Supercars, we wanted another junior driver to join the programme and Sebastian’s age and experience fit our requirements.

“He has the ability to learn and develop off Mika and Oscar, two drivers that have been through the same development curve in recent times. On top, Seb will benefit from exposure to our Supercars programme and the drivers and engineers that come with it.”