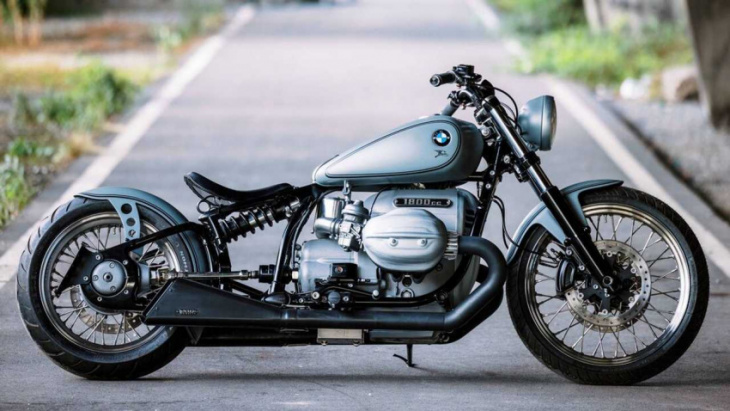 The builder of this motorcycle wanted to hit the rewind switch on this BMW R18, opting to remove all the modern electronics on it to create a truly retro experience. Interestingly enough, fuel injection also fell under the category of “modern.”

Yep, you read that right folks, this is a BMW R 18 that has been stripped bare of all its modern technology which includes the fuel injection system. Without it, however, how does one feed a massive 1,800cc behemoth of a boxer motor? Simple! With Carburetors, Bing carbs to be exact. To feed the massive pistons, Kingston Customs opted for a carb on each side to make this vision a reality.

The R 18 is already a stunner of a big retro cruiser, but of course, we have a ton of motorcyclists out there that are purists at heart and who want the stuff from the good ol’ days. An order came from a Swiss client, Kurt Alexander Engelhorn, who organizes the St. Moritz Automobile Week. Engelhorn sent the order to Dirk Oehlerking of Kingston Customs in Germany and proceeded to discuss the feasibility of the project. Safe to say that the order was met.

This R 18 uses 40 series Bing carburetors, which is a part that was used in two-valve boxer models up until the mid-90s. One carburetor wasn’t enough due to the R 18’s massive engine, with each piston carrying up to 900ccs of displacement. The carburetors had to be modified to work on the R 18, and the modifications done to it were labeled as a “company secret.”

On top of all the hullabaloo of the carburetors, it’s a handsome bike. We get a Rough Crafts matte black exhaust system that gives the R 18 a different look on the side, there are also repainted pieces and the entire bike is also de-chromed and everything is just so minimal to look at.

Apart from that, there is a bit of a drawback to “downgrading/upgrading” to a set of carburetors. The BMW R 18 with fuel injection made 91 horses according to Dirk Oehlerking’s tests, while the carbureted one makes 84 horses with a slight drop in peak torque.

Oehlerking stated that he would be happy to convert other R 18s with the price on request. The bike is also named “Good Vibes,” and it’s the first carbureted BMW R 18 with Bing units. There are also other factory-supported specialists that can do the same conversion with Solex and Dell’Orto carbs, but only Kingston Customs makes a Bing-equipped R 18.