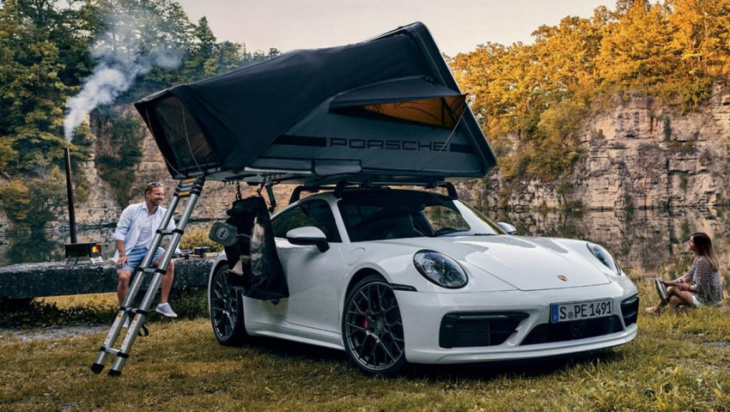 A roof tent is quite attention-grabbing, especially on top of a Porsche 911.

If you thought owning a sports car, say a Porsche 911, meant limiting your outdoor adventures, Porsche wants to try and prove you wrong.

The latest addition to Porsche’s range of accessories and products is a roof-mounted tent, which can be fitted to the top of a Porsche 911, a Macan or Cayenne SUV, its Panamera executive sedan, or its new Taycan electric car.

While models like its SUVs or the Taycan Cross Turismo wagon would be relatively practical for camping, Porsche has used a 911 in its promotional photos for its press release. Why wouldn’t you turn a sports car into an outdoor adventure vehicle if you had the opportunity?

While you’re much more likely to see the tent atop Porsche’s most popular model, the Macan, the Stuttgart brand says aside from the Cayman and Boxster, the models it wouldn’t recommend for the roof top tent are those without a solid roof like the Targa and Cabriolet models, for obvious reasons.

It also suggests the 911 GT models, like GT2 and GT3, aren’t suitable for the tent either which could come down to a combination of aspects like differing materials, suspension, or simply an aversion to mount a tent to a supercar that costs as much as a house in the outer suburbs of Melbourne.

The tent itself, which measures 210cm by 130cm on its inner floor surface, is suitable for two people and features side windows and a roof window for taking in the sights wherever you manage to access in your Porsche.

It comes in a black and grey hardcase to sit atop the car and weighs only 56kg. Porsche also says a vehicle with a tent case atop shouldn’t go north of 130km/h on the speedometer.

In Germany, Porsche is offering the roof top tent for EUR€4980 (AUD$7415) though Porsche Australia has already told CarsGuide the tent is headed for Australia and at a quite specific cost of AUD$8639.73.

“The Porsche roof tent is now available to order in Australia and is expected to be available from November 2022,” which is the same time as international markets.

As the world slowly shifts towards a more sustainable future, adopting electrification along the way, it is only a matter of time before race cars mirror this arrangement. After all, Formula E is amongst the earliest pioneers to adopt electricity as its propulsion source and now Porsche has dropped ...