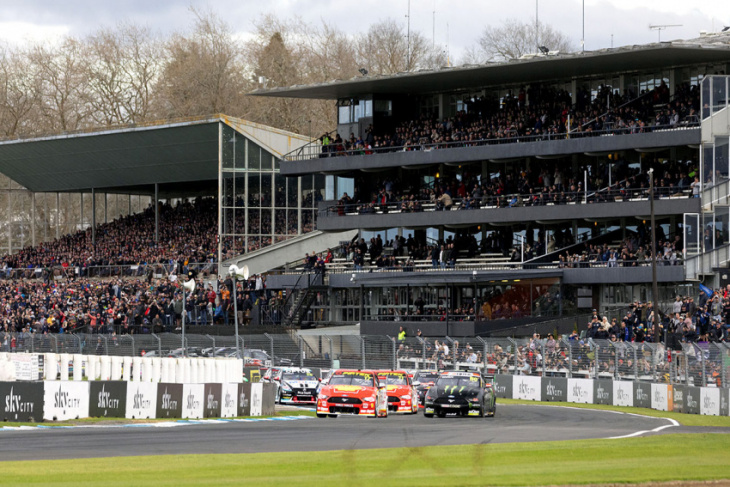 Supercars is yet to commit to a future location for its New Zealand round, with a potential new venue touted by Shane van Gisbergen.

Pukekohe Park Raceway hosted the Repco Supercars Championship for the final time last weekend ahead of the circuit’s closure in April 2023.

The event drew a sold-out crowd on Sunday as fans witnessed a home event victory for van Gisbergen after a titanic battle with Cameron Waters in Race 29.

It was a fitting farewell for Pukekohe, with the sport reaching the end of an era of racing at the historic track.

Hampton Downs Motorsport Park, also on the North Island, is considered the logical future home of Supercars’ NZ round.

As reported by Speedcafe.com, discussions were to have ramped up over the ITM Auckland SuperSprint over a replacement venue.

However, the championship’s CEO, Shane Howard, was non-committal on a new destination for the event.

In a statement provided to media, Howard said the series is continuing to work through options.

“What a fitting farewell this weekend’s event was here at Pukekohe,” he said.

“We would like to thank the many thousands of fans that came out in force across all three days, with a sold out crowd on Sunday capping off years of success at this amazing venue.

“That moment on Sunday afternoon when the crowd rose as one to celebrate Shane van Gisbergen’s emotional victory to claim the Jason Richards’ Memorial Trophy will go down as one of the most memorable in our sport’s history.

“Following on from the success of this weekend’s event, we will continue to explore the potential for future hosting of the Repco Supercars Championship events in New Zealand.”

A possible move to Hampton Downs faces the hurdle of negations with funder Auckland Unlimited, given the circuit is located in the Waikato District.

It is not clear whether the promoter’s backing would continue in the case of a move further away from Auckland, though an MOU was signed with Waikato over joint economic development opportunities in April 2021.

A race on New Zealand’s South Island is also supported amongst Kiwi drivers.

Van Gisbergen flagged Ruapuna, near Christchurch as another possible option amongst Highlands Motorsport Park, while Taupo International Motorsport Park has also been mentioned.

“Ruapuna probably doesn’t have the facilities but the layout is awesome and from wherever you are on track you can see the whole track.

“That probably would be the best racing track I reckon, is Ruapuna, if they spend more money on it.

“We could have two tracks and two races here, we could go to Hampton and then you could go to Christchurch.

“It’s got a big airport right by the track, it would work out perfectly.”

Keyword: Supercars yet to commit as new NZ option touted

But a high-performance EV hasn't been green-lighted yet.

From intimate tours of Ferrari, Lamborghini, and Maserati to the grandstands of the Italian Grand Prix, it was the trip of a lifetime for our guests. Join us next year.

A render of the S650 Ford Mustang Supercar In this week’s Pirtek Poll, Speedcafe.com wants to know what you think of the new Gen3 Ford Mustang that will race in Supercars next year. The highly anticipated seventh generation Mustang road car was launched last week, paving the way for ...


View more: POLL: Which Mustang Supercar do you prefer?

A roof tent is quite attention-grabbing, especially on top of a Porsche 911. If you thought owning a sports car, say a Porsche 911, meant limiting your outdoor adventures, Porsche wants to try and prove you wrong. The latest addition to Porsche’s range of accessories and products is a ...

The Earl’s Court motor show at this year’s Goodwood Revival is a place where motoring timelines meet. Marques old and new gather cars of the past, present and future in a selection quite unlike anything you’ve seen anywhere else. Between what other four walls will you find a Pininfarina Battista ...

This is the first look at the new-gen Ford Mustang that will compete in the Australian Supercars championship. Ford revealed its new Mustang Supercars entry for 2023 alongside the striking new road car and it has underlined its commitment to the Australian racing category. How committed? Well, Ford Performance ...

A render of the new Ford Mustang labelled ‘Supercar’ Ford has offered a glimpse of its new-spec Mustang that will race in categories such as Supercars, NASCAR, and GT3. The S650 Mustang shape will replace the current S550 body, marking the iconic pony’s seventh generation. It comes as the ...

South Australia could require supercar drivers to have special training

BMW Says It's Always Thinking About A New Supercar

All the multimillion-dollar supercars and concept cars at Pebble Beach