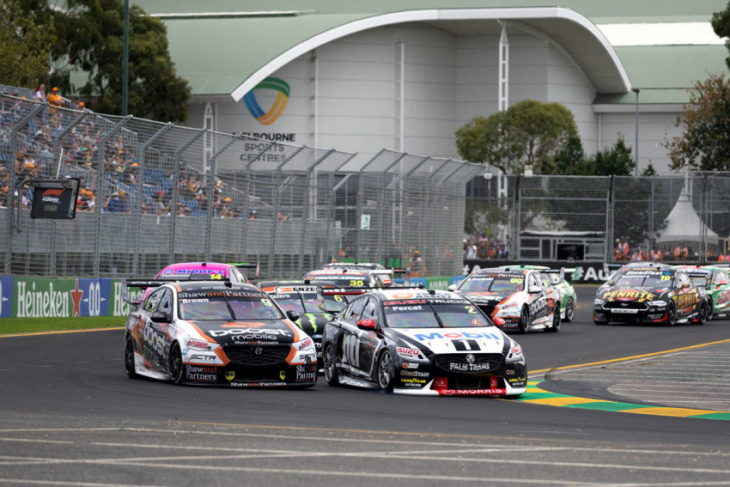 The Supercars Championship field at Albert Park in 2022

The Repco Supercars Championship field is likely to have shorter races at next year’s Australian GP due to the addition of Formula 2 and Formula 3.

For the first time Formula 1’s official feeder championships will feature at Albert Park while Porsche Paynter Dixon Carrera Cup Australia is set to be retained on the support bill.

It creates a serious challenge for the Australian Grand Prix Corporation, which promotes the event, due to a combination of F1’s strict scheduling requirements and the simple fact that there are only so many hours in a day.

As such, the Supercars component of the event is likely to take on a different look and feel.

“For something as big as this event, it’s like a rock concert,” AGPC CEO Andrew Westacott told Speedcafe.com.

“The big hero event is Formula 1 and we will fit Supercars in there on the support programme, but it’s highly likely that there’ll be some shortened race distances.

“Now, that needs to be worked through with our motorsport team and the team at Supercars to come up with something that is befitting a championship round of Supercars.

“How that format morphs and evolves, well that’ll be up to those teams, but what I can say is that it’s a championship round and there’ll be something that is unbelievably entertaining because racing in front of 419,000 [record crowd in 2022] across four days, showcasing the sponsors at Albert Park, is never something to be forgotten.”

The Australian Grand Prix is a four-day event and while F1 is always a Friday-Saturday-Sunday proposition, all of the other categories on the bill had been able to run on Thursday.

Now, only the Supercars Championship and Carrera Cup will have that flexibility, which would seem to create a trade-off between maximising track time for those competitions while not creating too onerous a schedule for teams and drivers.

However, it could lead to the unusual sight of Supercars racing on a Thursday on the Melbourne street circuit, when they’ve previously only undertaken afternoon practice sessions.

“The key part is going to be that Thursday will be entertaining; it’ll absolutely be centred around the local categories [and] the fans will see some wonderful track sessions,” Westacott affirmed.

“I’d expect that they’re going to see some races of Porsche and Supercars on the Thursday as well, but we’ll step through that detail over the course of probably the next six weeks or so.”

The Friday would see another pair of qualifying sessions and the first race of the weekend, then two races on the Saturday and the last on the Sunday.

Furthermore, the last two Australian Grand Prix schedules (2020 and 2022) featured Supercars race lengths of 20 laps or around 100km each, which typically take up about an hour of track time once the full grid procedure is added to around 45 minutes of racing.

As something of a rough guide, this year’s Italian and Dutch Grands Prix, for example, featured F2 and F3 as well as Porsche Mobil 1 Supercup, the latter of which had one half-hour race on the Sunday of each of those events.

A further factor to consider is that, with the 2023 AGP taking place on March 30-April 2, it will straddle the change from daylight savings to standard time in Victoria.

Still, according to Westacott, endeavours are being made to try and accommodate Supercars and Carrera Cup on the Sunday at Albert Park.

“The key thing on Sunday, and the area that is protected at all costs by Formula 1, is the integrity of race start times on the global feed,” he explained.

“Now we’ve got three times that challenge because there’s a global feed commencement of F3, F2, and F1.

“I really want to make sure that F2, F3 are supported by a Supercars race on Sunday and a Porsche race on Sunday. Now, if we can achieve that, great.

“It might mean that they race early, but it is an important thing because the great attraction of our event is that families can bring young children, grandparents can bring their grandchildren, and they have a look at the off-track support categories in their paddocks, and they really are great entertainment for people walking around.

“I’d love to seem the race. The challenge then goes out to Formula 1 personnel and David Corrigan [Division Manager – Motorsport, AGPC] and our team to really make sure that we can fit it in.

“But that’s what we’re aiming for, and we’ll see where we get to.”

Australia is Round 3 of the 2023 F1 season and while Supercars is still yet to release its own calendar for next year, it is highly likely that the Australian GP will be its second stop of a 12-event campaign.

Sale of AGP tickets begin today with Grandstand presale for AusGP Access members and hospitality suites, ahead of General Admission on December 6.