Gunter Schachermayr rode his customized Vespa on railroad tracks for over 10 minutes. 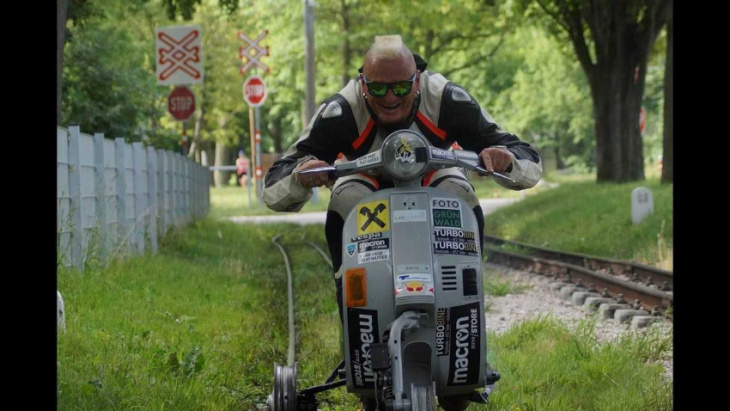 When it comes to car and motorcycle-related world records, it can sometimes be hard to tell if the record in question is actually something worth attempting, or if it’s really just a publicity stunt. It’s a matter of opinion, really, but regardless of what you think of crazy, foolish, or outlandish records, they’re definitely good fun and showcase just how far man and machine can go to prove they can do something just because they can.

In the world of two wheels, you may be familiar with stunt rider Gunter Schachermayr. Hailing from Austria, the talented stunt rider is best known for his escapades aboard his Vespa. He’s done some pretty wild stuff with his little scooter, such as towing an airplane and riding it down a chimney. This time around, he decided it would be a good idea to ride his Vespa on a set of railroad tracks, because, you know, the road is simply too boring. 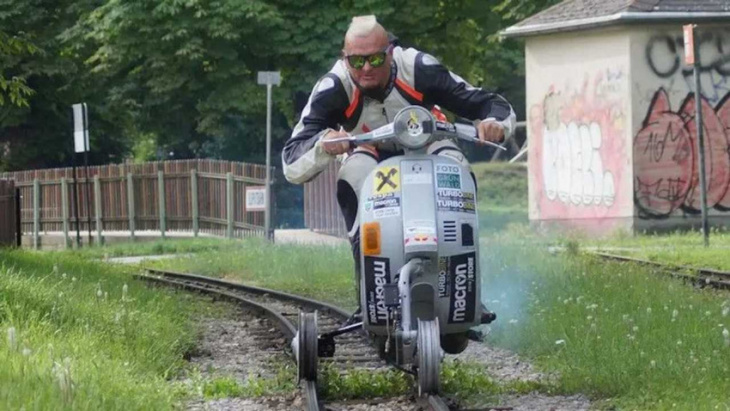 Interestingly, someone had already thought of executing this ingenious idea in the past, so Gunter had his work cut out for him. He would have to smash the existing record of 10 minutes and 20 seconds. Now, to achieve this record, Gunter had to do some extensive modifications to his Vespa. The scooter now rolls on just its rims—no tires. Furthermore, an outrigger on the right side of the scooter practically turns it into a tricycle, eliminating the need to actually balance the scooter.

The resulting contraption was so stable that Gunter didn’t even need to wear a helmet throughout the duration of the stunt. He did, however, decide to wear a full leather race suit, which I find pretty…interesting. As for the record itself, Gunter absolutely smashed the existing record, and rode his Vespa on a set of abandoned railroad tracks for a total of 10 minutes and 25 seconds of exhilarating fun. It’s interesting to note that his team had to carefully choose a set of tracks for the stunt, as making use of operational railroad tracks and delaying trains in the process carries a hefty 70,000-Euro fine per minute. 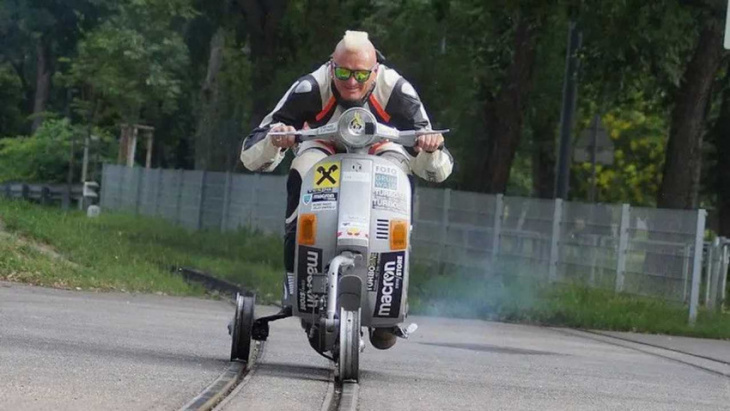 After securing the world record, Gunter took to YouTube and uploaded a montage of his record-setting run. It’s pure fun and wholesome entertainment, really, so hats off to Gunter for having a blast on his Vespa, as well as setting a new world record in the process.