Saying that Steeda knows a thing or two about Ford vehicles is a bit like saying Nicola Tesla was vaguely familiar with electricity. Since 1988, Steeda has designed and developed performance parts for Mustangs and other Ford models, like the F-150. It’s not exactly shocking that their new F-150 Thunder package is a veritable storm of power and performance. But it is pretty cool, as you’d expect. 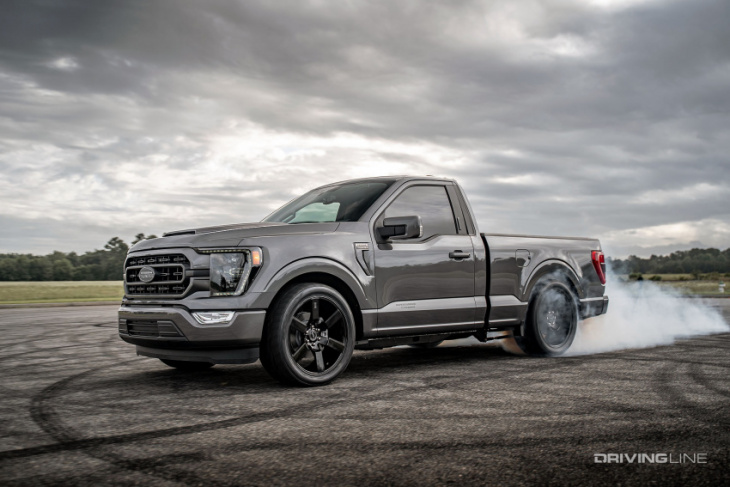 The Thunder is the latest evolution of a story that started in 1992 with the F-150 pickup truck and Formula One legend Jackie Stewart. Ford created the F-150 Lightning SVT back then to compete with Chevy’s 454 SS. 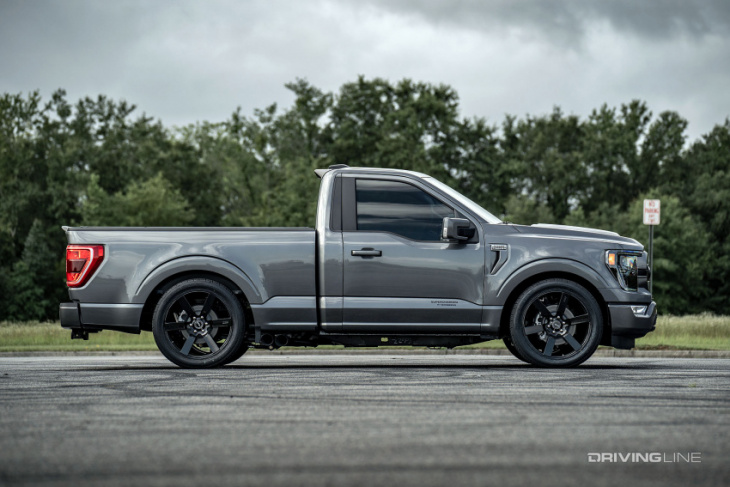 The idea was to enhance the sporty image of the F-series that the company wanted to convey. That’s why Jackie Stewart was brought on board to give his insight into fine-tuning the performance truck’s handling. After Ford President Ed Hagenlocker introduced the Lightning to the world, it received tons of favorable press. Three decades later, the Lightning is still going strong.

Thanks to Steeda and the Thunder package, it gets much, much stronger. The early Lightning SVT packed a 240 hp 5.8L V8 engine. Its descendant runs a 5.0L Coyote V8 that makes an impressive 400 ponies. 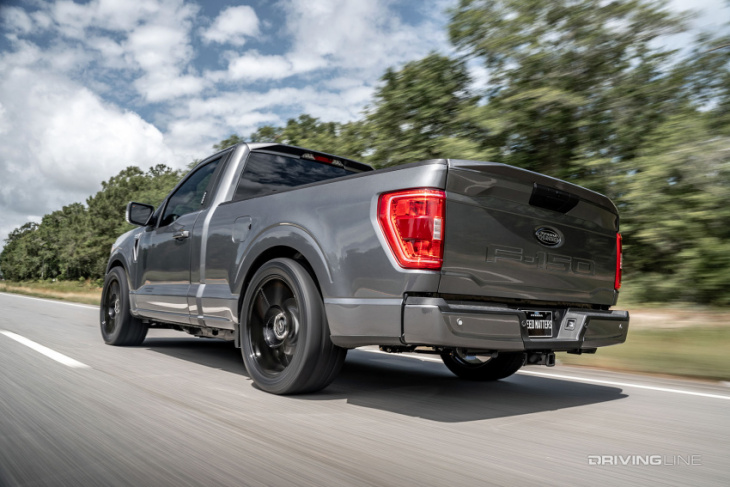 Steeda knew it could do better; though, and the F-150 Thunder fires off a whopping 775 hp. It’s also completely at home on the street or the track. As Steeda’s Bob Adams puts it, “We have always admired and respected what Ford Motor Company did when they brought the SVT Lightning to market—it was and continues to be a legendary truck. Over the years we modified plenty of them for our customers that wanted a little bit more performance. Lately we began to receive an inordinate number of consumer requests for a modern day reincarnation of the famed Lightning trucks of yesteryear. With the knowledge that the Ford F-150 has been and continues to be the best truck in the market and when you add in the legendary 5.0L V8 and the new 10-speed transmission, we felt that the time was perfect to bring a supercharged street performance truck back to the streets, racetracks, and drag strips in America.” From a sound design perspective Steeda wanted to make sure that when you start the supercharged 5.0L V8 there would be an unmistakable sound and feeling of all out performance.

Basic math tells us that 775 is a lot more than 400. You might think that Steeda got that dramatic increase in horsepower through extensive alterations of the engine package. 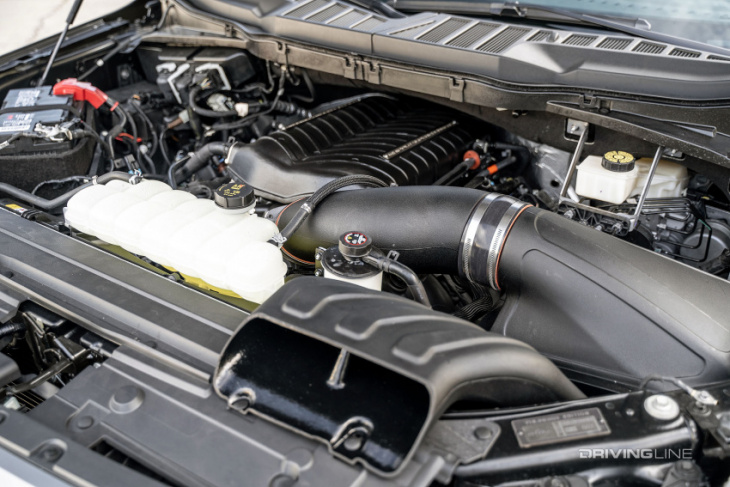 Rather than go through the entire engine part-by-part, Steeda opened up the V8’s potential via supercharger. “We use the Whipple Gen 5 supercharger system and it is the most advanced and highest quality system available,” Bob Adams tells us. “Our partnership with Whipple is longstanding and they continue to reset the bar with new precedents for reliable power.  When you add in a fully CARB approved calibration, you have a performance package that cannot be beat.” The Thunder also uses MBRP’s Armor BLK cat-back exhaust system which balances a deep rumble with moderate volume, to boot. Moreover, the Thunder gives you that power on tap throughout the power band: “This truck launches incredibly well and hooks-up like no other,” Bob Adams elaborated. “When you are cruising and nail the throttle, there is an instantaneous feeling of massive power that the Whipple Gen 5 Stage 2 supercharger provides. So from low end to mid range, to the upper power bands, the power is at your control all of the time.”

Pickup trucks aren’t exactly renowned for their razor-sharp cornering ability at speed. If you’re going to make a truck sportier, you have to address that. 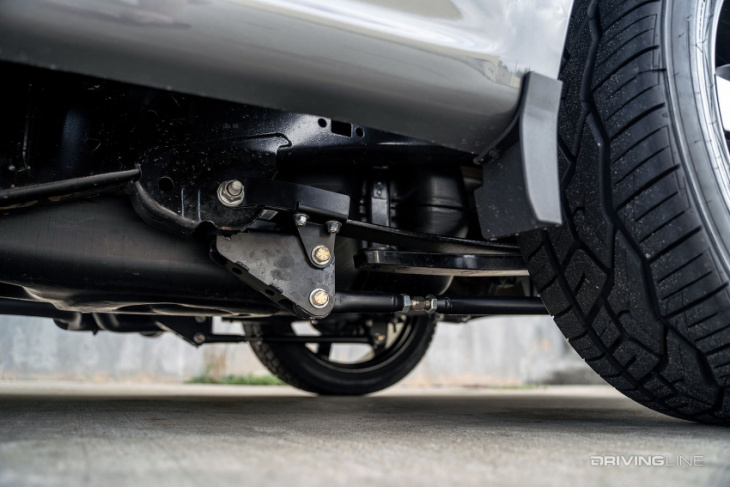 Steeda wanted a street performance truck and that meant a lower center of gravity for massively improved handling and launching hard from a standstill. Lowering the truck also allowed them to tune the suspension for maximum performance. Suspension on any vehicle is a key element to its performance and ride quality. Steeda partnered with IHC Performance and included dual adjustable QA1 rear shocks performance matched to the QA1 front coilovers with 4-inch OD springs. When you add in the ease of adjusting the rear suspension traction bars for the street or the dragstrip, the suspension system delivers the level of performance that Steeda’s clients demand. Since power means nothing without control, the Steeda F-150 Thunder’s precision-engineered suspension keeps the driver in command. It also delivers the level of handling performance that makes it a tough combination to beat while delivering pure driving excitement.

Realizing Thunder’s vision also meant rolling on the right wheels and tires for the job. Both play their part in the sweet symphony of excellent handling on the road. 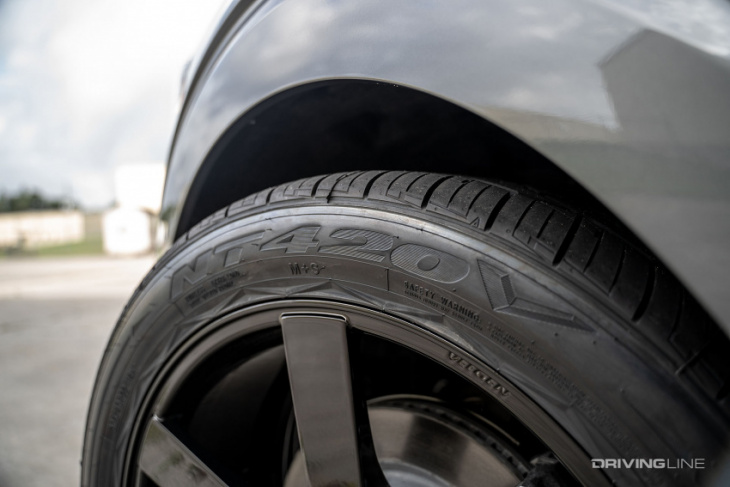 To that end, Steeda chose Nitto NT420V luxury truck tires and 22×10-inch Velgen DDR VFT6 Forged Aluminum Wheels in gloss black finish.“We have had an outstanding relationship with Nitto Tires from Day One,” Bob Adams continued. “We have done extensive testing with Nitto on their performance tires and we completely trust their leadership in design and engineering of their products. When you add in their manufacturing quality and commitment to their customers, they are the only brand we ever consider on our performance vehicle offerings. Nitto is synonymous with performance and value.”

Going into the project, Steeda wanted to pay homage to the past Ford SVT Lightning designs but with an added modern upgrade. Obviously, they weren’t trying to build a sleeper; Steeda made the Thunder not just to walk the walk but also to talk the talk, aesthetically speaking. 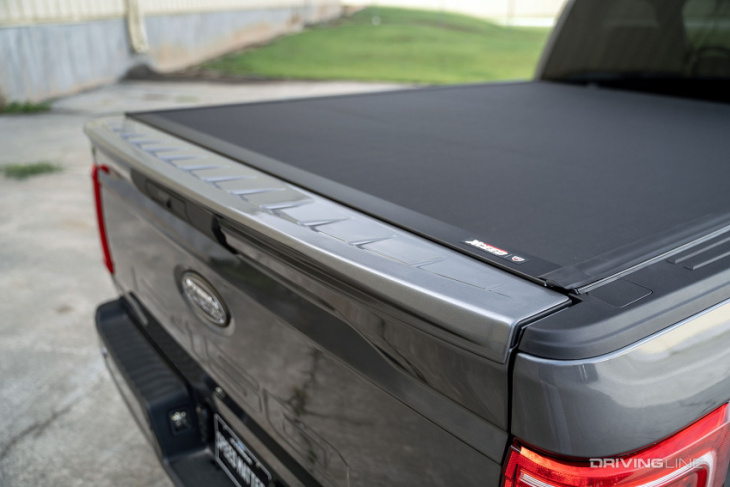 The stance of the Steeda F-150 Thunder is aggressive and makes a design statement all by itself. From the color coordinated enhancements, the aero upgrades, Extang F-150 5.5″ Xceed Seamless Hard Folding Tonneau Cover, Thunder graphics, and tinted windows to the BedRug F-150 5.5′ Classic Bed Liner, Thunder looks every bit the update on the classic Ford SVT Lightning’s genetics that it is. 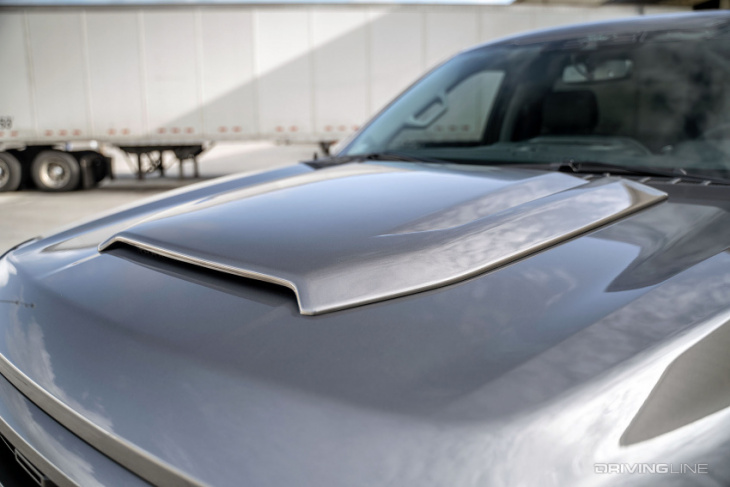 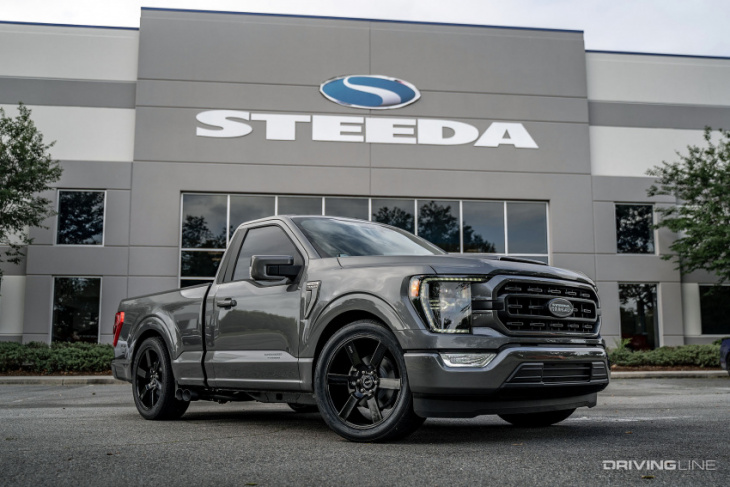 The Steeda F-150 Thunder can be built on any 2021 to current Ford F-150 with the 5.0L V8 engine and the 10-speed transmission. This includes regular cab, super cab, and super crew cab models in both 2WD and 4WD configurations and any trim level. Read more on Steeda’s F-150 Thunder here.