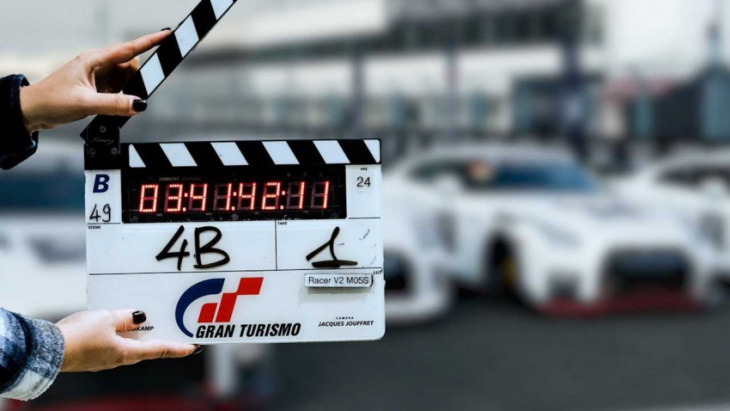 Sony is adapting its iconic racing video game franchise for the big screen. The movie kicked off production in late September, and a new post to Sony and Gran Turismo’s Twitter accounts reveals that filming has started. The movie is scheduled to hit theaters on August 11, 2023.

Accompanying the announcement was a photo that sadly does not reveal much about the movie. It shows a clapperboard in focus with a row of at least four Nissan GT-R coupes sitting in the background, but they’re blurred and obscured from view. They appear to be wearing race liveries, as the movie’s plot revolves around a young teenage video game player who becomes a professional race car driver after winning a series of Nissan competitions.

The movie stars David Harbour, of Stranger Things fame, who will serve as the kid’s coach. Orlando Bloom and Darren Barnet will also star in the Neill Blomkamp-directed film. Blomkamp is best known for his sci-fi works, such as District 9, Elysium, and Chappie. Gran Turismo creator Kazunori Yamauchi is serving as an executive producer. Jason Hall and Zach Baylin, of American Sniper and King Richard fame, respectively, wrote the script.

Harbor said in a Collider interview this week that “there’s a visceralness to this movie” with Blomkamp in the director’s chair, adding, “I can’t wait for you to see this movie.”