It's based on the world's third best-selling EV. 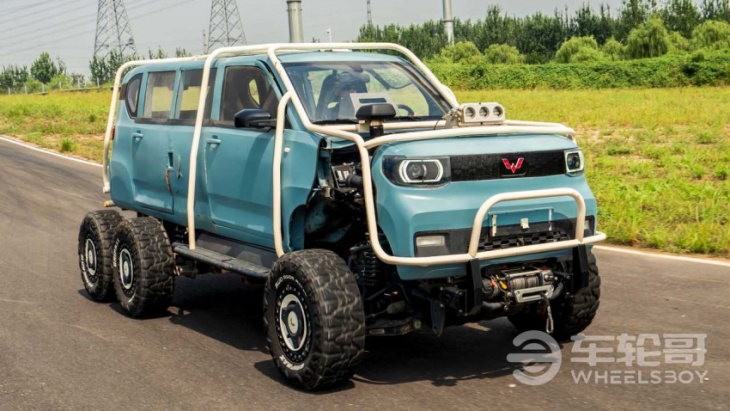 Wuling Hong Guang Mini EV – this name probably doesn’t bring any memories to your mind but if there’s one thing you need to know about it, it’s that this has been the third best-selling electric vehicle in the world in 2022 so far. The Mini EV – not related to the Mini automaker by any means – is a zero-emissions microcar with a decent range and cute styling. It’s not designed for off-road but there’s one example of the car that is probably more capable than your old Jeep.

A new video from our friends at Wheelsboy takes us to China where they filmed a rather weird-looking six-wheeled off-roader. The story of how this monstrosity came to life is rather long but here is the short version which is rather interesting.

The vehicle started its life as a Great Wall Motors Cannon, which is a midsize truck sold in China and other countries around the world wearing different names. The chassis, suspension, and many other components were left original but – obviously – the entire vehicle was heavily modified to accommodate six wheels and a new cabin. Powering the machine is a 2.0-liter turbocharged four-cylinder engine produced by the same Chinese automaker.

But that’s not even the weirdest part. Sitting atop the truck chassis is an elongated version of the Mini EV, which the creator of the off-roader built for a previous project. The entire machine took – behold! – just two weeks to be assembled from the existing long Mini EV and the truck chassis. It has been sitting on the outside for at least a year and the exterior condition is not especially great.

Another unique feature of this off-roader has to be its roll cage or rather, its full body exoskeleton. The funny part is that its primary goal is not to increase the safety of the six-wheeled buggy but to make it look better from the outside. Oh, and did we mention there are gullwing doors attached to the body?

Don’t waste more time reading about this vehicle – you need to see it to draw the full picture in your head. A picture is worth a thousand words, they say, and we offer you the perfect visual display in the form of a 15-minute video and an exclusive photo gallery shared by Wheelsboy with us.