Rust in Peace: 15 vehicles killed off this year

Maybe, just maybe, you can quickly identify your favourite brand of kitchen appliances. But how many of us can quickly list the toaster models that were discontinued in 2021 or the all-new blender variants launched in 2022?

Cars aren’t toasters. SUVs aren’t blenders. The automobile industry builds emotional products. These are inanimate objects with personality. And when an automaker decides to cancel an individual model, we adopt distinctly human-appropriate phrasing. Was a car discontinued, or did it die? Rather than issue a simple notice marking the end of production, we say, “Rust in peace.”

The death of an automotive nameplate causes even casual observers to sit up and pay attention. And it’s little wonder: automakers often make seemingly odd and newsworthy decisions. In the United Kingdom, for example, the nation’s best-selling vehicle, Ford’s Fiesta, is on death row. Meanwhile, over on this side of the pond, Honda has twice brought back to life a now thrice-discontinued nameplate.

In 2022, our annual chronicling of the Canadian auto industry’s vehicular obituaries includes 15 distinct models plus one entire segment. This doesn’t factor in models-within-models; the trim levels and performance editions or distinct powertrains that make up one aspect of a nameplate’s repertoire. Not surprisingly, a dozen of this year’s infamous victims are passenger cars. Rare is the automaker interested in killing off an SUV or crossover.

In a sense, the Acura ILX hasn’t called it quits. Based on the ninth-generation Honda Civic, the Acura ILX was a largely ignored attempt to steal sales from the Audi A3 and Mercedes-Benz CLA-Class during a period in which the 10th-generation Honda Civic topped Canadian sales charts. The new Acura Integra, a clear relative of the 11th-gen Civic, now takes over in the very same space, albeit with a heritage-inspired name. The ILX’s best Canadian sales year was 2013, its first full year on the market. By the end of 2022’s third-quarter, more than a decade of effort resulted in 21,163 sales. Acura averaged 2,600 ILX sales per year in Canada during its first half-decade; only 1,500 per year during the last half-decade.

GM bumped its subcompact crossovers out of commission by introducing two slightly larger siblings, the Encore GX and Trailblazer. The Encore and Trax landed in Canada at the tail end of 2012 and produced over 10,000 combined sales in 2013. Canada actually served as an experiment for the Trax, and it was apparently sufficiently positive: GM launched the Trax in the U.S. at the end of 2014. In pre-pandemic 2019, GM Canada was selling roughly 1,300 copies of the Trax and Encore per month. That was down to 358/month in 2021; 110/month in 2022. 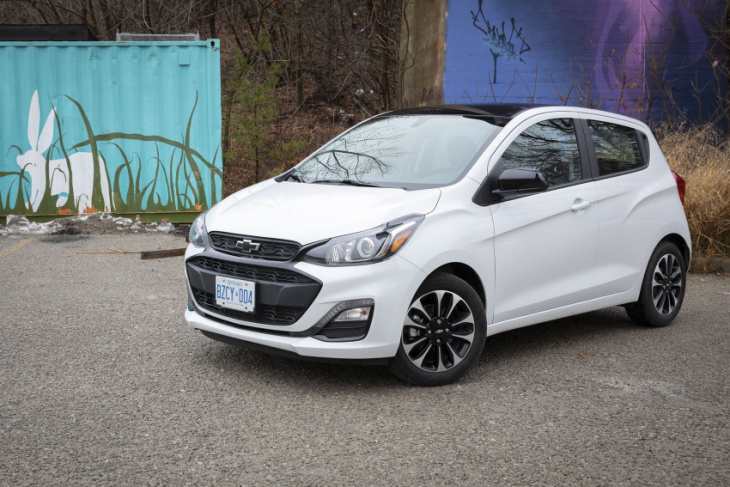 With the Nissan Micra, Hyundai Accent, Mazda 2, and countless other low-budget subcompacts long gone, the Chevrolet Spark was generating meaningful volume in a two-car battle with the Mitsubishi Mirage. During the pandemic years of 2020 and 2021, Chevrolet actually sold 12,435 Sparks, on par with the prior two years. But this is low-margin territory, so General Motors is following in the footsteps of almost every other automaker and fleeing the category.

Built in southern Ontario, the Chrysler 300, Dodge Charger, and Dodge Challenger are all set to retire in 2023. The 300 and Charger — at least in their modern rear-wheel-drive orientation — date back to 2005; the Challenger arrived three years later. Those were very different times for big cars with large engines. The trio combined for 15,749 Canadian sales in 2008; nearly quadruple the 4,282 sold in 2021. 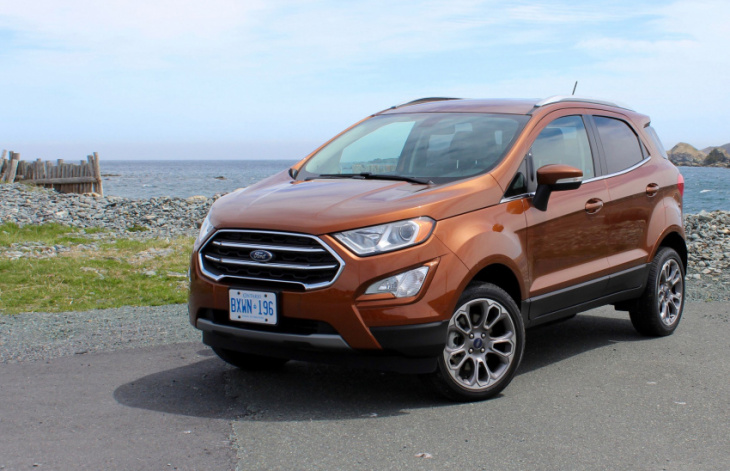 Too little; too late. Ford jumped into North America’s blossoming subcompact SUV category at the tail end of December 2017 only to discover that the EcoSport placed too much emphasis on the sub part of subcompact. Undercooked and overpriced, Ford sold fewer than 22,000 EcoSports in its first four years. Hyundai sold over 31,000 Konas in 2021 alone.

Supercars come and supercars go. The Blue Oval’s half-million-dollar Ford GT, however, is worthy of mention for a unique reason. It’s assembled in Markham, Ontario. Ford Canada reported 11 GT sales during the first nine months of 2022, bringing the total since 2017 to 69.

The third time was most definitely not the charm for Honda’s frequent flop, the Insight. In concert with the first Toyota Prius, Honda kicked off the auto industry’s hybrid efforts with the first Insight before succumbing to the low-volume nature of a niche-market, hyper-eco-conscious, two-seat hybrid six years later in 2006. Honda tried again with a more Prius-like Insight between 2009 and 2014 with no meaningful success. The handsome third-gen Insight arrived for 2018 but has attracted only 1,652 customers. Over the span of just the last nine months, a dreadful year for Honda with scant availability, there were 23,909 Civics sold.

Like the Honda Insight, Hyundai’s Ioniq was initially launched as a potential contender for the Toyota Prius. In 2019, incorporating hybrid, plug-in hybrid, and electric variants, Hyundai sold 3,667 Ioniqs in Canada. That crushed the Insight but fell well short of the Prius’s 10,505 2019 sales. The Ioniq, as an individual nameplate, is now dead, but the branding lives on as Hyundai’s electric base. A completely different vehicle, the all-electric Ioniq 5, recorded 4,377 sales during 2022’s first nine months. 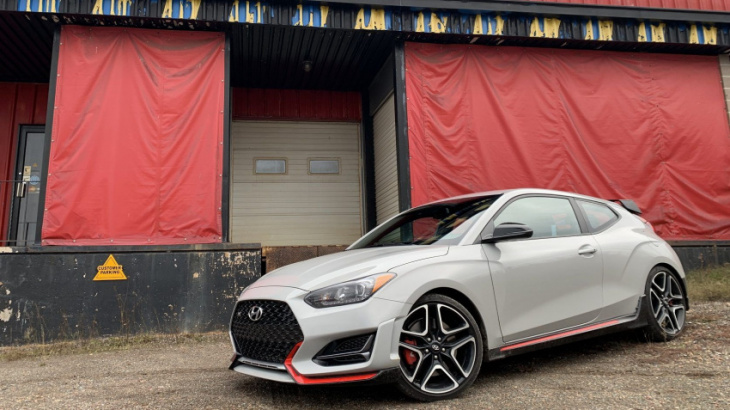 After shrinking the range to include just one high-performance, high-priced N model, Hyundai has now given up on the Veloster entirely. Sporty small cars are decidedly not en vogue, but that’s not to suggest the Veloster didn’t fight the good fight for an extended period. Hyundai launched the quirky three-door in 2011. In Canada, 27,412 Velosters have been sold in total. In its best year, 2012, 5,741 Velosters were sold. By 2019, Veloster volume had fallen 75 per cent before falling further during the pandemic.

Just how far has the market moved away from the personal luxury coupe? Coupe competitors of the Infiniti Q60, namely the Audi A5 and BMW 4 Series, actually now include four-door options in addition to the four-door nameplates from which they’ve sprung, the A4 and 3 Series. The Q60 was left fighting for a very small slice of a very small pie. Only half a decade ago, Infiniti sold 1,118 Q60s in Canada. By 2021, that number had fallen to only 307 Q60s. Only 138 were sold during the first three-quarters of 2022. 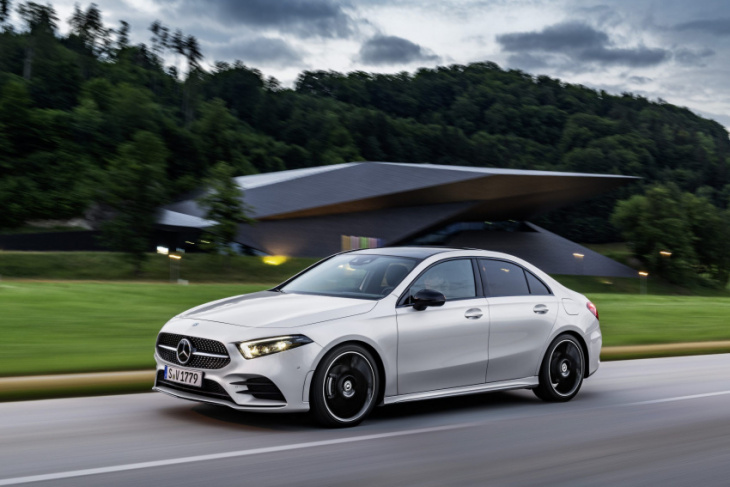 It wasn’t terribly surprising when Mercedes-Benz decided to squeeze the CLA sedan below the C-Class in 2013. But then Mercedes-Benz wanted to slide in another sedan and hatchback beneath the CLA in late 2018. The A-Class did not win hearts and minds at the rate Mercedes-Benz Canada required. Moreover, it fell out of favour quickly: sales slipped 53 per cent from 3,632 in 2019 to 1,723 in 2021.

Nissan’s once-famous 4DSC is the longest-running model on 2022’s list of dying nameplates, but time has not been kind to the Maxima. Nor has time played gently with the segment of large, somewhat premium-priced sedans from volume brands. Long gone are former Maxima rivals — direct and indirect — such as the Ford Taurus, Chevrolet Impala, Buick LaCrosse, Toyota Avalon, Kia Cadenza, and Hyundai Azera. Only between 2016 and 2019, Maxima volume in Canada plunged 58 per cent to only 971 units. Only 487 Maximas were sold in Canada in 2021.

Nissan experimented with the NV200, which Chevrolet borrowed and labelled as the City Express. Both gave up on the idea of selling small commercial vans in Canada. Mercedes-Benz’s Metris was evidently too dear. And Ram (with the ProMaster City) and reportedly Ford (with the Transit Connect) are skipping town, too. Small vans account for only 7.5 per cent of the commercial vans sold in Canada through the first three-quarters of 2022.

Keyword: Rust in Peace: 15 vehicles killed off this year