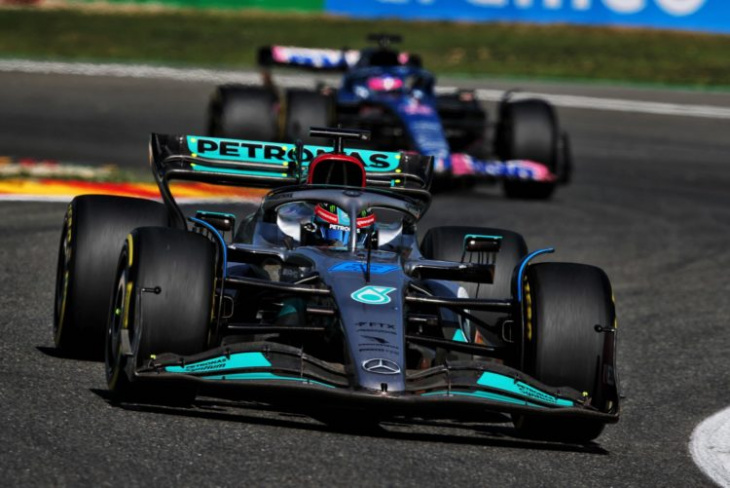 Mercedes struggled for pace throughout the weekend at Spa-Francorchamps but was comparatively more competitive in the race.

Russell moved up to third place at the start before settling into a rhythm in fourth spot, having relinquished a position to Max Verstappen.

Russell reeled in Carlos Sainz in the final stint but his challenge faded in the closing laps before ultimately coming home a couple of seconds behind the Ferrari driver.

“I have mixed feelings because had you told me we will be two seconds off the podium on merit and pure pace, I’d have said that’s a good recovery,” he said.

“When I was closing in on Carlos at the end, a second a lap, I thought here we go – we’re in for a really good shot here.

“But then I just had two really scrappy laps and got the tyres out of the window. When the tyres are in that sweet spot, the car is transformed but as soon as I lost them, I knew the podium was game-over.”

Russell reckoned Mercedes’ race pace was comparable with Ferrari’s display but that Red Bull is leagues clear up front.

“Overall, considering where we were, P4 and two seconds off the podium – not too bad,” he said.

“Our race pace was probably better than the Ferraris; Carlos started on pole, was leading the first stint and we closed him in both times. So at worst, I think we were equal with Ferrari, but as we know, it’s swings and roundabouts. What is clear is, Max is cruising away at the moment.”