Runaway Truck Ramps Can Be the Difference Between a Life or Death Situation, Says J.D. Power

If you’ve ever driven through the mountains, you may have noticed strange-looking off-ramps on the downhill slopes. These short-ish dirt roads seem like an afterthought going nowhere. But to drivers of semi-trucks, they’re a well-thought-out safety system that saves lives. Dirt off-ramps are actually runaway truck ramps and are designed to stop a vehicle that’s barreling out of control. Let’s take a look at how they work and how drivers use them.

What is a runaway truck ramp? 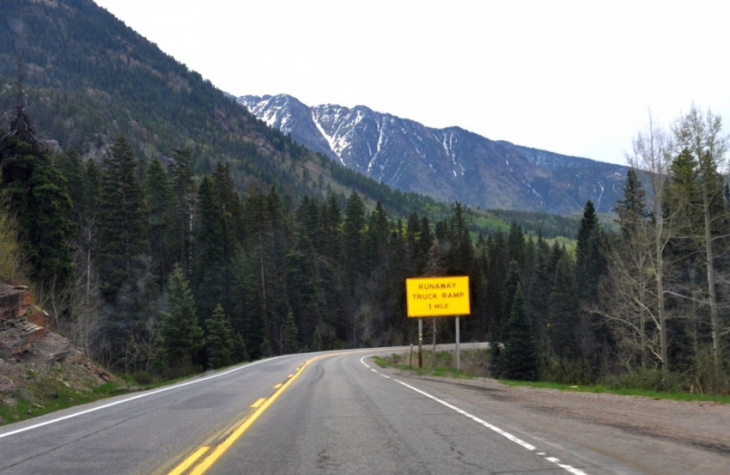 The Interstate highway system was developed to provide a faster, safer way to drive across the country. As the Interstate highway system expanded, so did commercial trucking. But more trucks mean more risks for accidents, which led highway engineers to design more safety systems, including the runaway truck ramp. According to J.D. Power, these ramps made their debut in the 1960s.

There are several types of runaway truck ramps. J.D. Power says the most common ramps are made with deep gravel or sand to quickly slow trucks, bringing them to a stop. Other ramps use wire nets or barriers filled with sand or water. In just about every case, the ramp has an uphill slope to leverage gravity to help slow the truck.

Runaway truck ramps are easy to spot. They look like unfinished highway off-ramps that go nowhere, and they are usually preceded by a yellow highway sign informing drivers of their location.

How do you use a runaway truck ramp?

There’s not much to using a truck ramp. If you are unable to control your speed, the important thing is to stay calm and look for ways to slow down rather than coasting, like engine braking or using the jake brake. You may not be able to stop, but you might be able to keep from speeding up on a downgrade.

Once you see a truck ramp, line up with it and continue trying to slow the truck. You don’t want to jerk the wheel or make any sudden movements that could cause you to lose control completely. Center the truck to the middle of the ramp and keep a firm grip on the steering wheel. It may be hard to keep the wheels straight when you hit sand or gravel.

After you hit the runaway ramp, keep the steering wheel as straight as possible and let physics do the rest. The truck will quickly slow down and slide to a halt.

Will a truck driver get fined for using a runaway truck ramp?

Car and Driver says that states decide how many, where, and what kind of runaway off-ramps to install. There are hundreds of runaway truck ramps in the U.S. spread out at regular intervals on interstates and major highways. They play a critical role in helping to ensure the safety of truck drivers and motorists on mountain passes. Thanks to modern brakes and other safety features on trucks, these ramps are rarely used but invaluable when needed.

Keyword: Runaway Truck Ramps Can Be the Difference Between a Life or Death Situation, Says J.D. Power

Jawa Yezdi Motorcycles has announced two new colour options for its existing line-up of Adventure and Scrambler bikes. The Yezdi Adventure will now also be available in ‘Whiteout’, a white shade that the company says was inspired by the snowy terrain, while the Scrambler will now come in the ‘Bold ...

The smaller Ram pickup is expected to hit the global market in 2024.


View more: 2024 Ram 1200 Spotted Testing In The Cold Together With Fiat Toro

LOS ANGELES, Feb 2 (Reuters) – Netflix Inc (NFLX.O) has unveiled a new star for some of its upcoming programming: electric vehicles from General Motors (GM.N). The streaming service announced an agreement on Thursday to feature vehicles including the Chevrolet Bolt, the electric GMC Hummer pickup and the Cadillac ...

Source: Harian Metro A collision between a pick-up truck and a passenger car in Mersing recently resulted in serious injuries to a 1-year old infant and 6-year old child. Their parents, who were in the car, also had bone injuries. Witnesses who saw the accident take place were angered ...

A new report states that Tesla plans to ramp up electric vehicle production at Gigafactory Shanghai to 20,000 units per week after a surge in orders. After years of claiming that demand was exceeding production capacity, we have seen plenty of evidence late last year that Tesla was starting ...

New Ferrari team principal Frederic Vasseur believes the start of the new F1 season will come at a good time for under-fire FIA president Mohammed Ben Sulayem. Ben Sulayem has dominated the F1 media headlines during the off-season over a range of issues. He started the year off by ...

Yezdi Presents New Colorways For The 2023 Adventure And Scrambler

Grammer supplying the BuzzBox for the new ID. Buzz