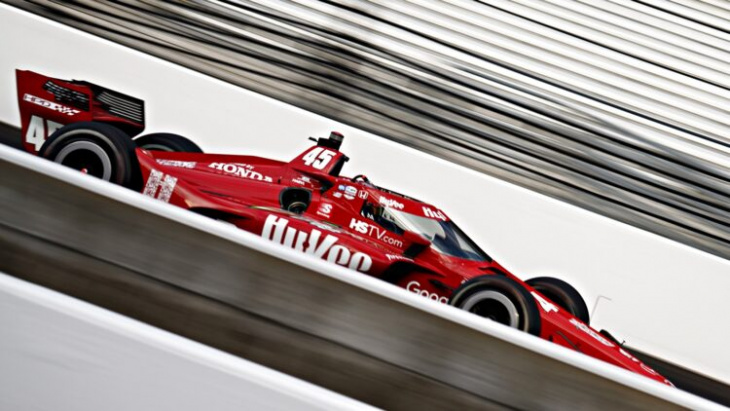 Christian Lundgaard will take over driving duties of the #45 Hy-Vee entry next season. Photo: Kevin Dejewski

Rahal Letterman Lanigan Racing has announced that it will be shifting two of its three IndyCar drivers around to maximize sponsorship opportunities within the team.

Christian Lundgaard will pilot the #45 Hy-Vee entry for 2023, with Jack Harvey swapping places and moving over the #30 entry.  Graham Rahal will stay in the #15 that he has piloted since 2013.

Hy-Vee has become a major sponsor in IndyCar in the past couple seasons, and having its branding aligned with a potential star in the making could prove to be a big commercial success.

The move also helps realign a few different areas of the team, with the goal of helping both drivers maximize their potential on the track.

“We have been looking at ways to ensure our increased performance and improve our potential for success for 2023 and one of our decisions has been to reassign cars to Jack and Christian,” said Bobby Rahal, co-owner of RLL.

“We made a commitment to our drivers, team members and sponsors to perform at our highest level possible and although 2022 didn’t work out as we wanted, we have made moves to improve this.  One of which was the commitment we made when we hired Technical Director Stefano Sordo, who can bring a new perspective.

“We feel this recent decision on our driver/car lineup will also be a positive one for both Jack and Christian as well as our organization as a whole.”

Harvey in particular struggled more than expected last season while driving the Hy-Vee branded car, which was his first year with the team.  Various areas of the internal shuffle will be aimed at improving the Briton’s results, which left him 22nd in the championship standings.

The first time Harvey and Lundgaard will be behind the wheel of their new cars will be during IndyCar’s open test, scheduled for February 2-3 at The Thermal Club.