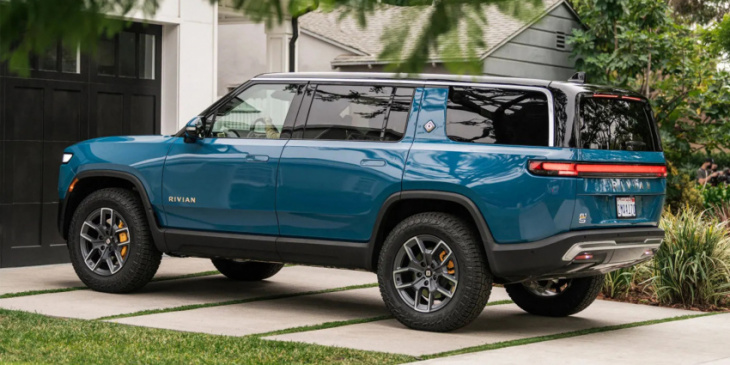 The Rivian R1T has been out to the public for months now, and the R1S has seen several employee deliveries. But this week we saw the first non-employee customer deliveries of the new R1S SUV.

The R1S is the SUV sibling to the R1T electric truck, with third row seating and an enclosed rear end, though with a shorter overall length and wheelbase than the truck. Seth drove the R1S back in July, and mused that it could be “the best SUV ever made.”

The first R1S were delivered in December, though those went to CEO RJ Scaringe and CFO Claire McDonough. In June, Rivian said that customer deliveries of the R1S could start as early as August, so it looks like they’ve just hit that timeline. Though this was pushed back from earlier timelines – last November, the earliest R1S delivery windows were around March-April.

So things got delayed a bit, but given it’s the company’s first ramp in one of the most difficult supply chain environments in memory, at least Rivian got there eventually. Now, the SUV has finally made it to the road, or at least a few of them have.

We’ve heard that several deliveries are happening this week, and the first short testimonials with photos surfaced on Friday. As far as we know, these are the first non-employee deliveries so far.

One was posted by Kyle Shultz of Rivian Stories, a fan site and show for Rivian owners and preorder holders. His post, “R1S in my driveway!” was a little light on details, but includes a few nice photos of the SUV in a suburban driveway. He originally ordered in Nov 2018, right when the R1S was first introduced.

While Shultz is not a Rivian employee, he has been a leader in the Rivian community, and so this could be considered a “VIP” delivery to some extent, but it’s still a non-employee delivery. Another host of Rivian Stories, Skyler, also got his R1S the same day, both picked up from the Rivian factory in Normal, IL.

We got more detail from another customer, Rick Fletcher, who has “no connection to Rivian” whatsoever. After being contacted by Rivian earlier this week, he took delivery today of an R1S with a VIN in the ~500 range, which he initially pre-ordered in April 2019. He spent about two hours going over the vehicle with the Rivian employee who delivered it to his Pennsylvania home – fittingly, on the same day as a planned family camping outing.

Took delivery of my LE R1S today! from Rivian

Fletcher shared his experience and some photos in this forum post, and said his first experience driving an EV was “like being in a video game that got the physics wrong.” He was further impressed by the capabilities of Rivian’s Driver+ driver assist system and the ease of charging at an Electrify America charger. He ended the day charging on a 30A RV plug at the campsite his family is staying at. What a way to break in the car.

Beyond these two first-hand delivery experiences, we’ve also heard of several other R1S being delivered to non-employee customers and service centers in various parts of the country. It looks like the first wave is really getting going.