There was anticipation in the air, Rivians on the floor and 1,500 soon-to-be owners and their families last weekend at the Rocky Mountaineer Station in Vancouver, B.C., as many gathered at an open house heralding the arrival of the U.S.-based electric vehicle maker in Canada.

British Columbia is the first location outside the United States to take delivering of the R1, and company officials say the brand will be selling their all-electric R1T pickup and R1S SUV across Canada by the end of next year. 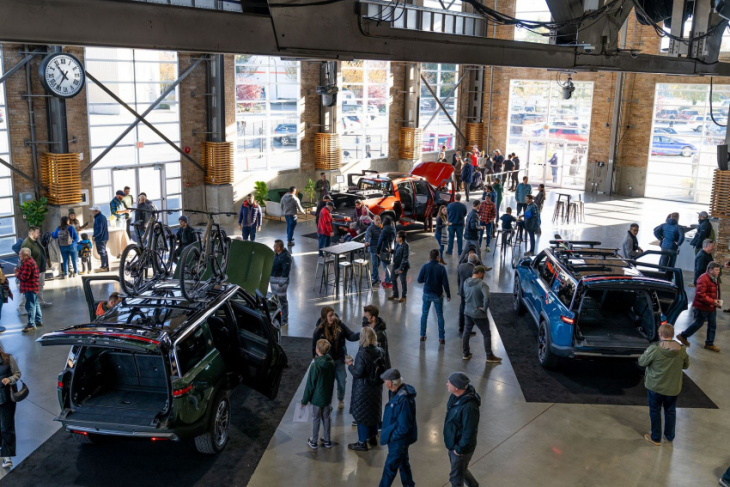 During the two-day event at Vancouver’s Rocky Mountaineer Station, visitors learned about the features and capabilities of Rivian’s electric adventure vehicles, from the Gear Tunnel to Camp Mode. CREDIT: Rivian Photo by Rivian

“We’re thrilled to begin deliveries in British Columbia, not just because it’s a great place to use our products, but because many of our Canada-based employees working in software and customer engagement call Vancouver home,” said Tony Caravano, Rivian’s senior director of customer engagement. “We’re looking forward to forming new relationships and celebrating as our customers in B.C. embark on their own R1 adventures.”

The company has over 150 employees in the Vancouver area to establish a strong and growing foothold in the region with a focus on building the software that powers the ownership experience from mobile app to in-vehicle systems. Other local initiatives include engagement with B.C. universities and educational institutions to create a co-op program, leaning on the region’s status as a tech hub.

B.C. customers began receiving their Rivians on Monday (Nov. 21), with a service centre up and running in Richmond, B.C.

Rivian may be facing a situation that's similar to Tesla's, though the EV maker maintains it outperforms rivals on health and safety.

At least a dozen employees at Rivian have accused the electric-vehicle maker of safety violations at its Illinois plant, according to complaints filed with federal regulators. The complaints allege the company ignored known hazards and de-prioritized safety resources, leaving some workers to share respirators needed during the manufacturing process. They ...

Since first rolling out in July, Amazon's EDVs have delivered more than 5 million packages to customers in the United States.

The EV maker originally said the R2 platform designed for smaller, more affordable EVs would launch in 2025 at a new plant in Georgia.

Volkswagen's electric 4x4 brand for America shows promise as an idea, but enthusiasts will have to wait a while to get one.


View more: VW Readies Scout, but Will It Be as Pricey as Rivian?

Sadly, it’s doing better than other electric truck startups… Third-quarter financials for Rivian Automotive, the California-based EV startup, and it’s not entirely pretty. The company, which has only been publicly traded for a year, posted a net loss of $1.72 billion. Even though that was greater than the $1.23 billion ...

Our Rivian R1T Had Its Recall Service; What's It All About?

Rivian Starts Charging People For Towing, Even For Covered Work