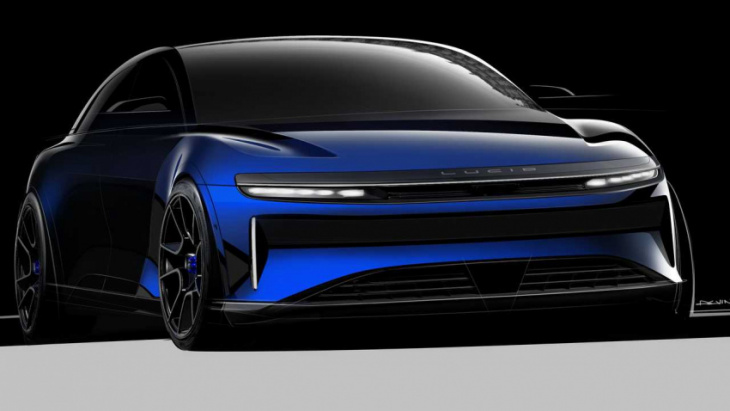 This week, we have news from Monterey Car Week, including a wreck that involved a Rimac Nevera. We also have news from Genesis, Lucid, and Polestar. Here’s our Top EV News for the week of Aug 26, 2022.

Check out the full newsletter for the week, which includes more Electric Vehicle News, and also news about Autonomous Vehicles.

The Genesis X Speedium Coupe EV’s interior and sleek exterior is stunning. Genesis gave a glimpse of the exterior earlier this year, but the interior was not revealed until last week at Monterey Car Week. The interior was inspired by minimalistic Korean architecture and is simple, yet stylish.

I like how the interior is designed around the driver, including the floating center console to enhance the driver experience. Hyundai has sold over 73,000 EVs this year and plans on launching the Genesis EV models in 2025.

It’s all fun and games until a motorcyclist crashes into your $2.5 million Rimac Nevera on the way to Monterey Car Week. There is a rumor going around that it was Richard Hammond piloting the motorcycle. We cannot confirm this though (this is a joke).

The motorcyclist was allegedly driving recklessly on the PCH before hitting the Nevera. It appears to be a low-speed incident and all parties involved seem to be okay. The Nevera looked to suffer from minimal damage. I wonder what a slightly damaged Nevera would cost me?

The newly announced Polestar 6 has CEO Thomas Ingenlath thinking about bidirectional charging to feature in the vehicle, set to hit the streets by 2026. With bidirectional charging, dubbed “vehicle-to-load”, the Polestar would act as a battery backup during power outages, but could also send energy back into the grid during peak demand. The Polestar 6 is expected on the road in 2026.

As rumored in last week’s newsletter, the Lucid Air Sapphire was confirmed at The Quail last week. The EV features three motors, carbon-ceramic brakes, new sports seats, and over 1,200 hp. The vehicle can reach 0-60 mph in under two seconds with a top speed of 200 mph. Production begins in the first half of next year, so prepare your wallets as it will set you back around $249,000.

Want these stories and more directly in your inbox every Thursday? Sign up now! We also have an EV merch store for the ultimate EV enthusiast. While everyone is raising prices, we just reduced prices. Check it out.

Just 1.5% Of All Cars Are Full Electric Ban ICE Cars: 50% Of Singaporeans, South Koreans A global survey by Polestar, spurred by “the continued lack of climate action from car makers despite strong consumer demand” and a fair bit of corporate agenda, claims that the world really wants ...

The sleek Electrified G80 could end up ferrying around MPs if Genesis can attract interest from government fleets. SUVs might be king, but there’s still plenty of life left in sedans yet, at least according to Genesis Australia. The Korean premium marque has just launched the Electrified G80 EV ...


View more: Watch out BMW, Mercedes-Benz! How Genesis is muscling in on German luxury segment


View more: Polestar says nearly half of all Australians favour ICE ban by 2035

Styling, comfort and green travel all over Next level of cleaner transportation: the solar roof Hidden charging port and rapid charging Future of corporate and luxury road travel Australians love to travel, whether it’s for a holiday or for business. Corporate travel before Covid-19 was quite common. Many corporations ...