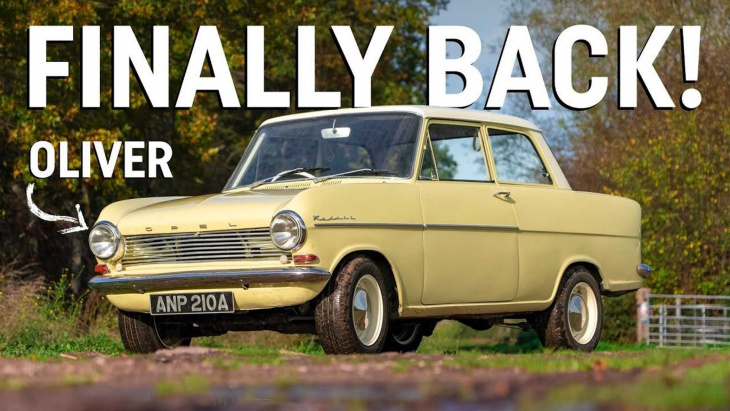 For the 2007 Botswana Special during the glory days of Top Gear, Richard Hammond purchased a then-44-year-old Opel Kadett A for £1,200. Once the film was shot, he decided to ship the car to the UK, and it “only” took him two years because of some issues with the paperwork. It wasn’t until a couple of years ago when Hamster announced his plans to revive the tiny sedan for Drive Tribe, which he co-founded with James May and Jeremy Clarkson.

The restoration process has now been finalized by Hammond’s own “The Smallest Cog” workshop. What is it? A first-generation 1967 Kadett A, provided we exclude the short-lived pre-war namesake car. The diminutive two-door sedan was powered by a then-new four-cylinder 1.0-liter engine with a mighty 40 horsepower, but there was also an “S-Motor” higher-compression engine that produced an extra eight hp. Hammond’s car has the base engine, routing power to the rear wheels.

We’re being told it has an overly soft suspension and a lot of body roll while the drum brakes front and rear are not that great. Having been built some 55 years ago, it’s obvious this original Kadett is not the safest car out there, but it certainly has its charm. The plucky Opel performed admirably in the Top Gear Botswana Special, although Hammond ran into some issues with its electrical system. As you may recall, James May used a 1985 Mercedes 230E while Jeremy Clarkson chose the 1981 Lancia Beta Coupe.

Previously painted the wrong color, Oliver now looks the same as it did in the show and rides on steel wheels like it used to back in the day. It’s not a full-on restoration as some of the exterior trim pieces are missing, but it doesn’t look half bad for a car that was manufactured more than half a century ago. Richard Hammond is toying around with the idea of turning it into a vintage rally car but that remains to be seen.

Keyword: Richard Hammond’s Oliver The Opel From Top Gear Has Been Restored