The Australian is set to be absent from the F1 grid for the first time in over a decade next season with his spot at McLaren going to countryman Oscar Piastri.

He is likely to land a top reserve driver role for 2023, having already been linked to both Mercedes and Red Bull Racing, and remains hopeful of returning to a race seat in 2024.

While an F1 reserve driver role is Ricciardo’s priority for 2023, race starts in other categories aren’t off the table entirely.

Asked in Brazil if he would consider a one-off start in another series, with Supercars used as the specific example, Ricciardo said he would consider it – as long as it would benefit his bid to return to an F1 race seat.

PLUS: The inadvertent farewell that F1 risks not appreciating

“I guess I need to wait to see where I land next year,” he said.

“Obviously I’m talking about potentially a reserve role or whatever. Truth is, I haven’t agreed to anything or signed anything yet.

“Then it comes to a question of, what am I allowed to do, is one thing, but ultimately, if I feel maybe doing a one-off will benefit me, and keep me sharp or whatever.

“Then it’s something I’ll potentially look into. 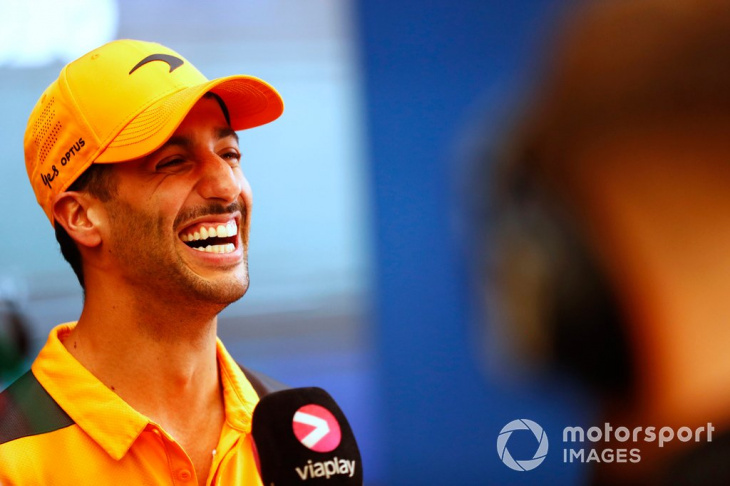 “But I’m kind of like, F1 is so different to maybe a touring car or something, that I don’t know if it will kind of distance me more. So that’s what I would need to work out.

“So yeah, tough. I don’t want to say no yet to anything. But ideally, I’d get some days in an F1 car as opposed to trying to, let’s say, get a seat somewhere else.”

Read Also:Ricciardo has felt like “a passenger” at times amid McLaren F1 strugglesRicciardo denies signing F1 reserve deal for 2023, rules out IndyCar move

At the time he said a future Bathurst 1000 start was a “50-50”, the topic of a Bathurst cameo later rearing its head when he joined McLaren.

That was through the link between McLaren and Walkinshaw Andretti United, which is co-owned by Zak Brown.

The Supercars rules allow teams to field one-off entries at the majority of events throughout the season, making a Ricciardo cameo at least feasible.

McLaren has nixed its 720S, paving the way for an imminent successor

McLaren's Elva gets a windscreen version

McLaren unveils its most venomous spider - the 765LT

Now in its 47th year, Retromobile 2023 is shaping up to be a smash hit. The Selected Car Group are excited to attend for the first time, bringing with them some of the most sought after collectors car in the market today. Each piece of automotive sculpture has been carefully selected ...


View more: Which of these game-changing supercars would you buy at Retromobile 2023?

Bollywood celebrities seen driving or being driven in flashy cars and SUVs is not a new thing. Usually, most celebrities are seen in luxury vehicles from brands like Mercedes-Benz, BMW, Audi and Land Rover. However, a couple of years ago, the cast of the Bollywood movie ‘Sooryavanshi’ broke headlines by ...

Will Lando Norris be the driver to end Max Verstappen’s F1 reign? McLaren aiming to be title contenders by 2025

McLaren CEO Zak Brown believes his team will be in a position to fight for F1 world titles by 2025. McLaren slipped behind midfield rivals Alpine as they finished fifth in the F1 2022 constructors’ championship but the team’s long-term ambition is to return to fighting at the very ...


View more: Will Lando Norris be the driver to end Max Verstappen’s F1 reign? McLaren aiming to be title contenders by 2025

Without a Playstation in sight, Christmas 2005 was a riot in the Clarkson household thanks to classic parlour games instigated by Jeremy's mum.

The McLaren 720S is dead. So what comes next?

Following a five-year run, the Mclaren 720s bows out of the game

TGSA sits down with the design director of McLaren Automotive, Rob Melville

Norris took F1 performance to ‘another level’ in 2022 – Palmer

The new Mclaren Artura – a step into the future

Mac's the Life : McLaren's Fantastic Beasts and Where To Find Them