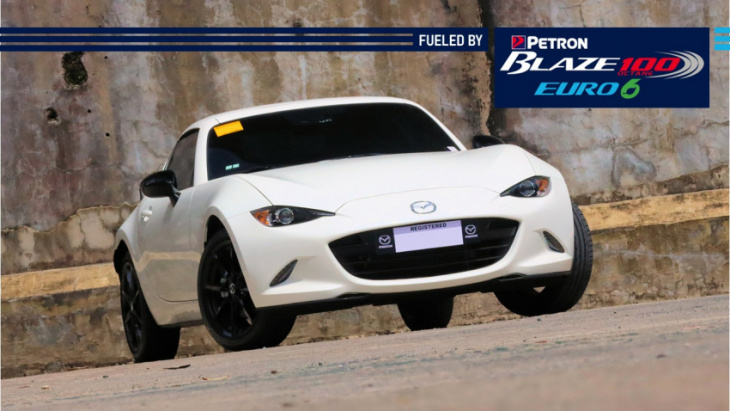 One year. That’s how long the owner waited for his Snowflake White Mazda MX-5 RF. The on-going global chip shortage and supply chain disruptions meant he pretty much went through the five stages of grief—denial, anger, bargaining, depression, and acceptance. He was, admittedly, close to throwing in the towel until he got a call that his roadster had arrived.

The MX-5 is in such short supply that every car arriving goes straight to an owner in a list. Supply is so tight that unlike most other models, the reservation list is pooled together regardless of which dealership a reservation was done at. Orders are served in a first come, first served basis. Dealers aren’t even allowed to stock a unit if it doesn’t have a would-be owner. 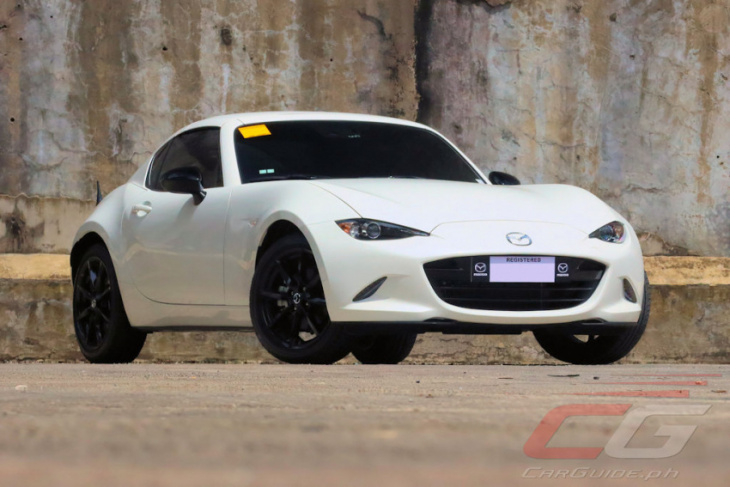 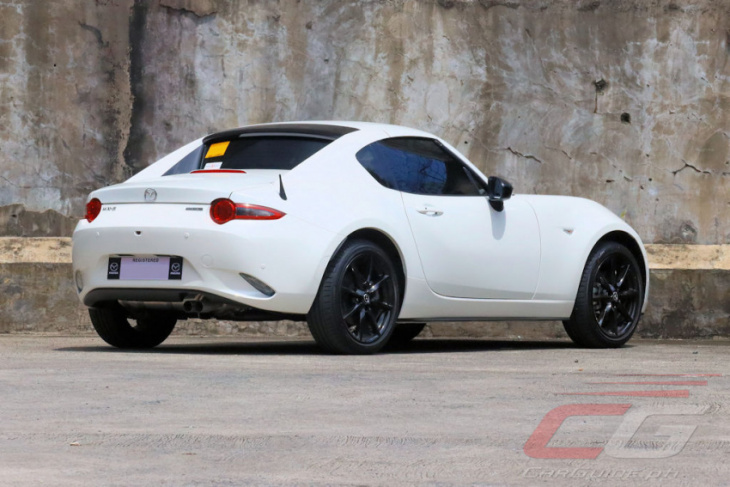 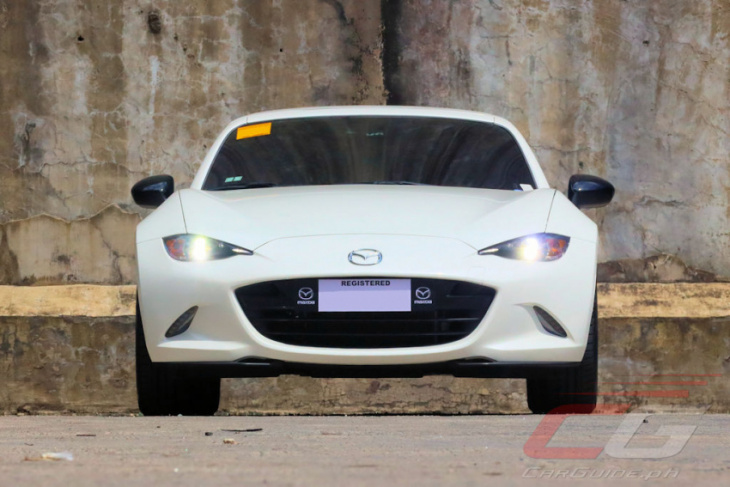 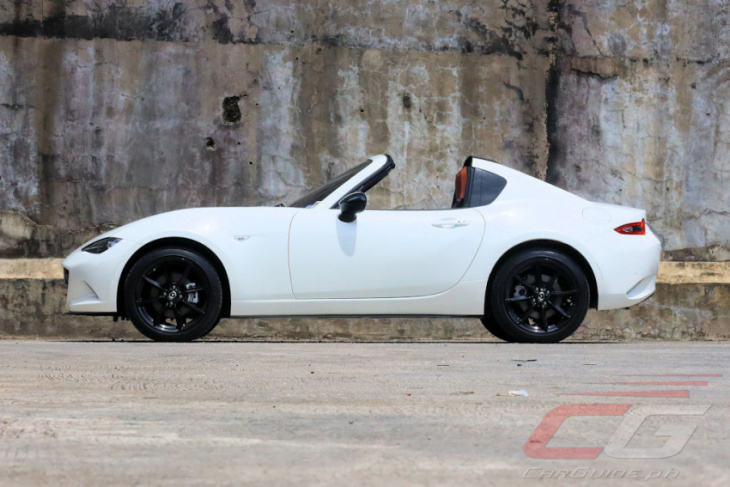 This brings me to this particular example. With no available demo unit from Mazda Philippines, this is the only way for me to sample what the 2023 MX-5 RF had to offer. Luckily for me, the owner obliged and lent me the keys for a couple of days for as long as I returned his car washed and fueled up.

Now, driving an MX-5 during the monsoon season isn’t exactly the most ideal scenario, but this variant, the RF (short for Retractable Fastback) makes it more ideal. Instead of having a hand-operated canvas top, this one has a power-operated hard top. It takes just 13 seconds for the three-piece roof to do its ballet transforming it from a coupe to a sort-of-targa. I purposely called it a “sort-of” targa because unlike a typical targa which has a fixed rear glass, the MX-5 RF’s rear glass also folds away during its transformation.

For purists, they’d say that the MX-5 RF and its flying buttresses looks weird. I don’t subscribe to that adage. If anything, it gives it its own unique flavor. 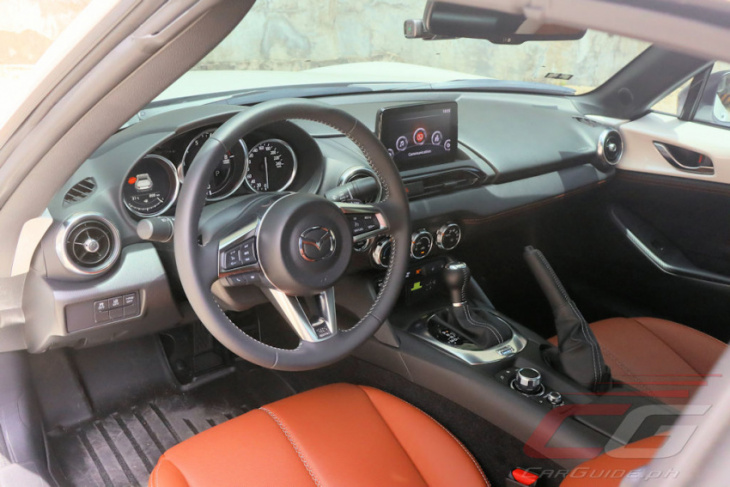 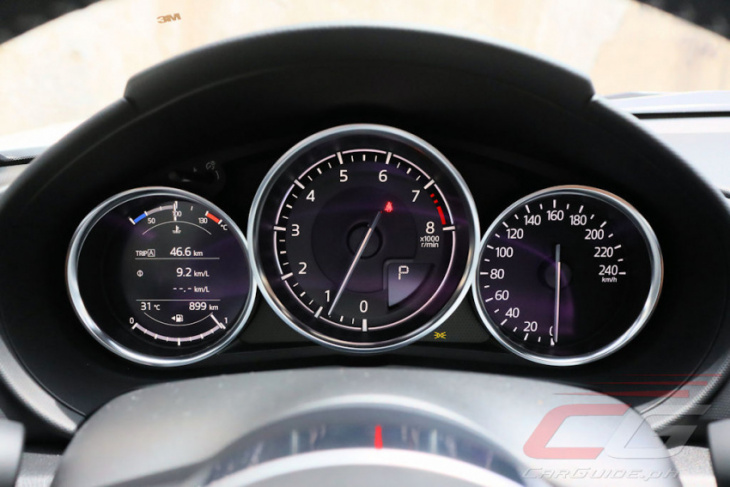 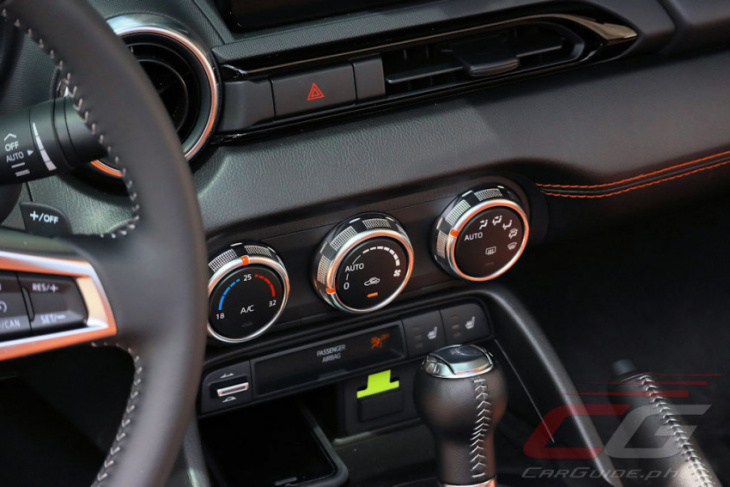 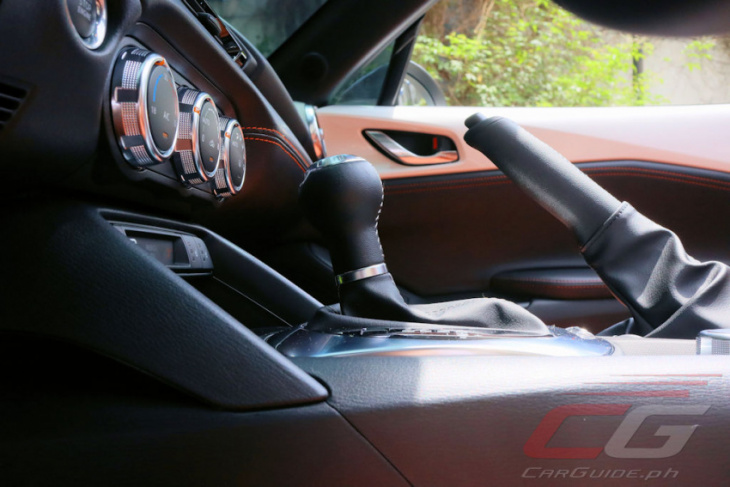 Surprisingly, the MX-5 hasn’t seen any exterior changes coming into the 2023 model year. Sure, the exterior (and engine cover) badges now reflect the new corporate font, but that aside, it’s pretty much the same vehicle launched way back in 2016 (2017 for the RF). Given how it still looks very contemporary in the fast-paced world of automotive design is reflective of its timelessness.

The roof is probably the most complicated thing on the MX-5 RF. The rest of it sticks close to its inspiration—British sportscars of the 50s and 60s. For that, this is one straightforward, yet elegant roadster. New for 2023 is the availability of Terracotta nappa leather seats. The wonderfully soft (and fragrant) full-grain orange-brown leather seats match the stitching that runs across the dashboard and door trims. 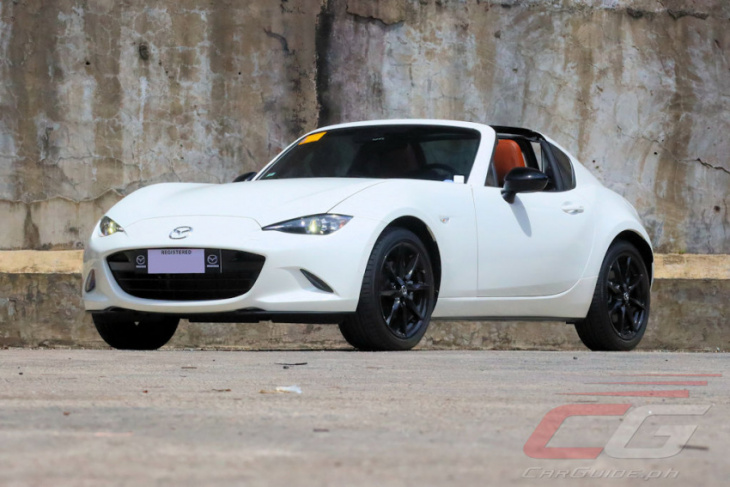 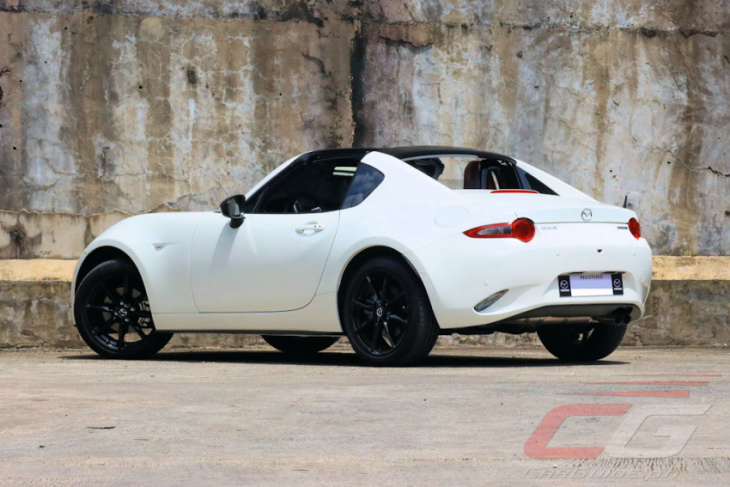 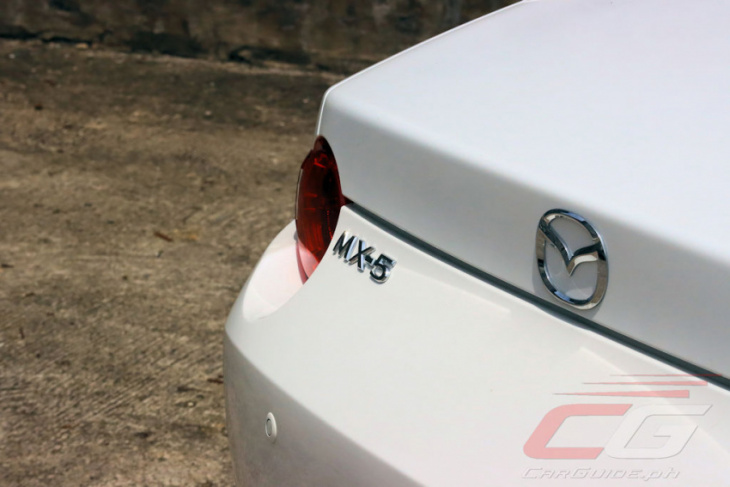 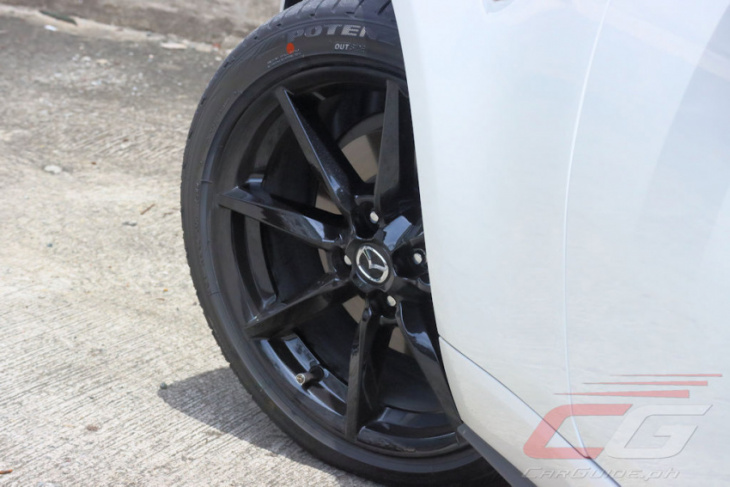 There’s some tech to unpack (and I’ll get to that later), but big picture-wise, it’s very clear that designers wanted you to concentrate on one thing: driving. There are no door pockets or a glove box save for a tiny lockable compartment and a lidden bin between the seats. There’s a cubby hole just big enough to hold a modern smartphone near the USB ports (Apple CarPlay and Android Auto is still a wired affair here), but that’s about it. There are two cup holders, but they’re positioned in a way that discourages drinking (or eating) while driving.

The MX-5’s interior feels decidedly shrink-wrapped around the driver. It punishes you if you slack off in your driving position, or if you put on some extra kilos. It seems Mazda’s “gram strategy” extends pretty much to the driver and his would-be passenger. 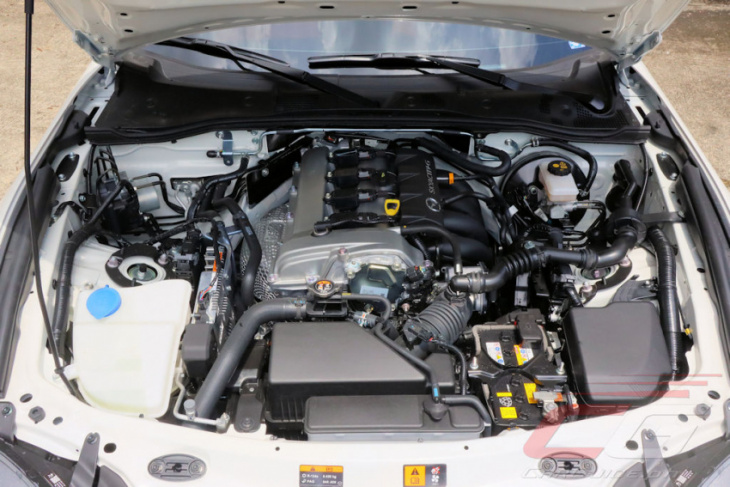 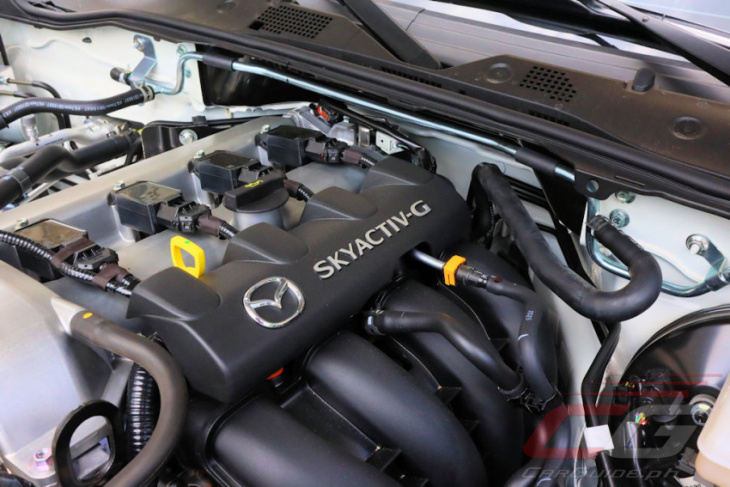 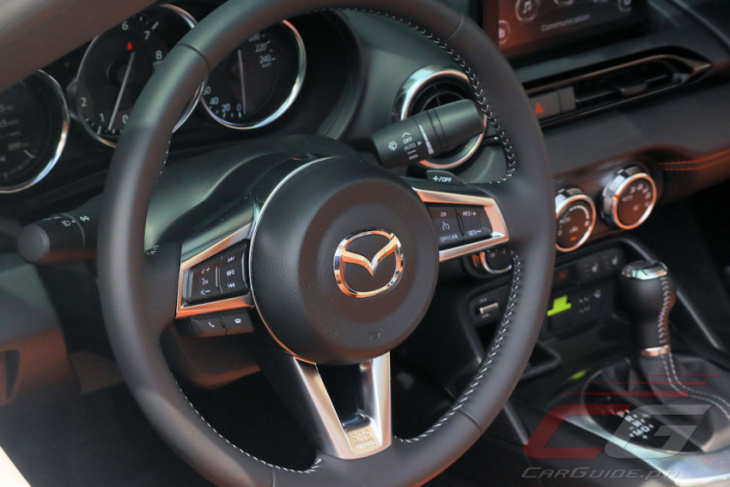 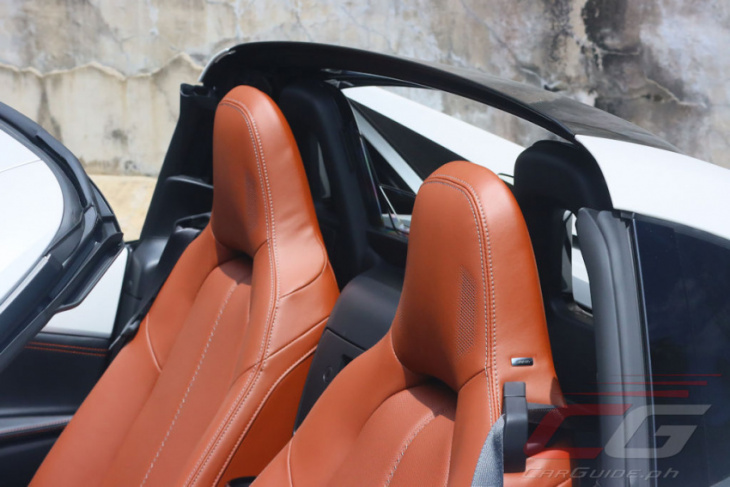 Subjectively, if there’s one thing Mazda got right versus the GR86 and Sbuaru BRZ is its trunk space. While the Toyobaru twins do have the larger hold, the presence of the spare tire robs a lot when it comes to its usefulness. The rear seats can be dropped, but if not, it’s not particularly deep. It can’t even accommodate a 1.5-liter bottle of Coke standing up. On the other hand, with no spare tire to deal with (it’s got an inflator kit), the MX-5 RF can easily store at least two overnight bags or one check-in luggage. Oh, and it’s worth reminding that the roof doesn’t eat into any of that trunk space.

Now, to the most important aspect: the drive. The Toyota GR86 and Subaru BRZ took a full model change to finally come close to the MX-5’s numbers. None of these cars are fast, but yes, the Toyobaru twins are quicker to the century sprint, if only just. However, when it comes to subjective, seat-of-the-pants feel, it’s the Mazda that remains the gold standard. It’s the one that simply tugs on your heart strings and gives you an emotional, visceral, and dare I say it, almost old-school analog feel. 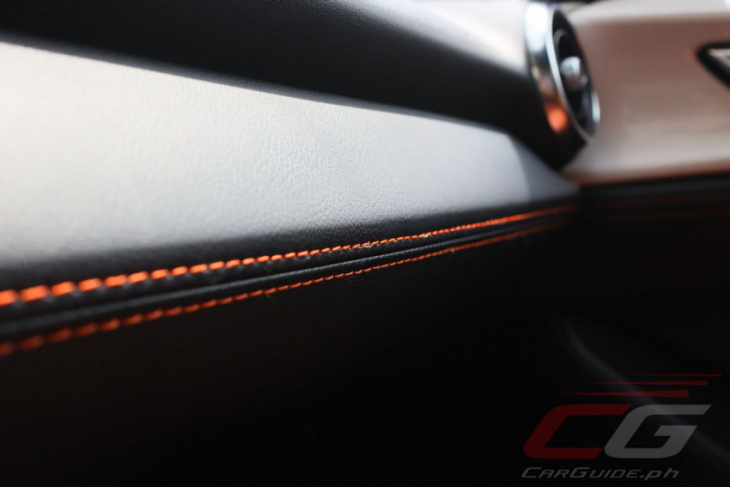 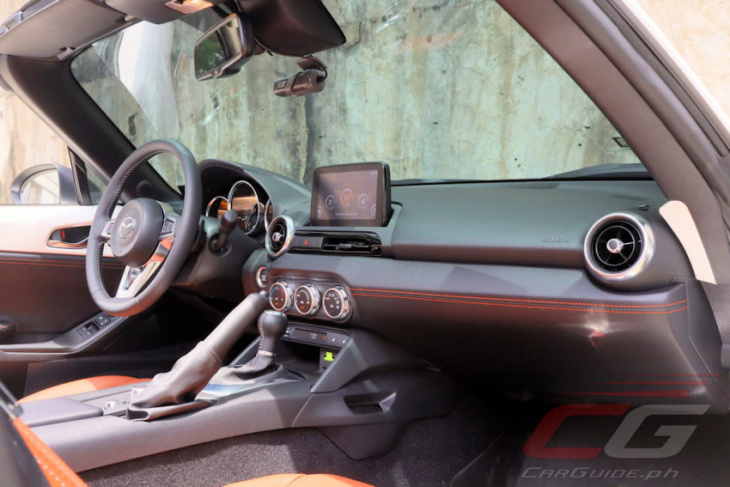 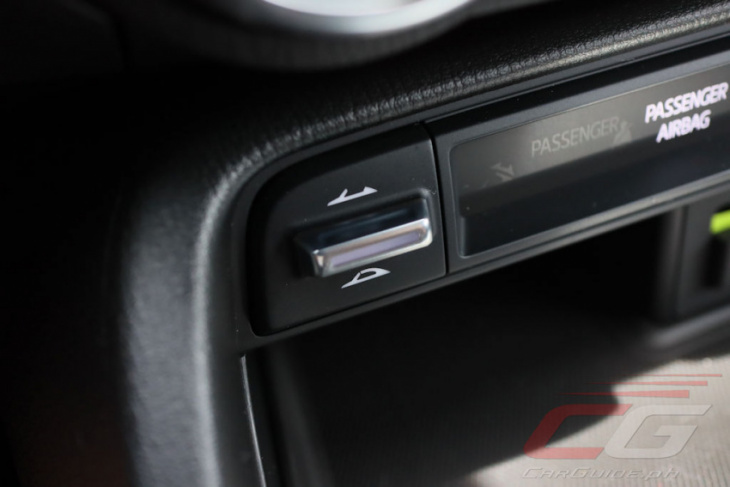 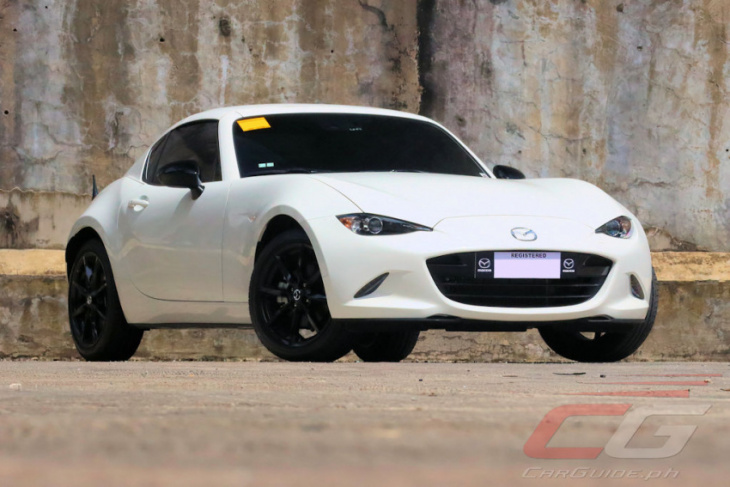 For one, the MX-5’s performance is approachable. It doesn’t need to be pushed to its absolute limit to be enjoyed. It’s the type of car that grows with you, and enables you to explore your driving abilities with. And at every step, it’s guaranteed to give you the time of your life. A lap around the Clark International Speedway or just a quick coffee run both induce a grin that’s hard to wipe off. The secret is down to two things. For one, it feels light. Instead of pushing itself through bends, the MX-5 tip-toes around them like a well-choreographed ballet. Second, there’s how Mazda manages to turn a common enemy of sportscars—body roll—as part of its charm. For 2023, Mazda started controlling some of that using Kinetic Posture Control, but it still leans in to give you a sense of enjoyment.

With just 1,125 kilograms of push around, the MX-5 doesn’t need a huge engine. The 2.0-liter Skyactiv-G is the perfect match for this platform—putting out 184 horsepower and 205 Nm of torque. The engine note, while subline, is amplified using a sound tube in the engine bay. Of course, the sound’s still all mechanical compared to the speaker-based system found in the Toyobaru twins. The high-compression (13:1) and high-revving nature requires a strict diet of at least 95 RON octane. However, it’s best to go for a fuel that makes your car perform at its peak such as Petron Blaze 100—the country’s only 100 octane and Euro 6 compliant fuel. 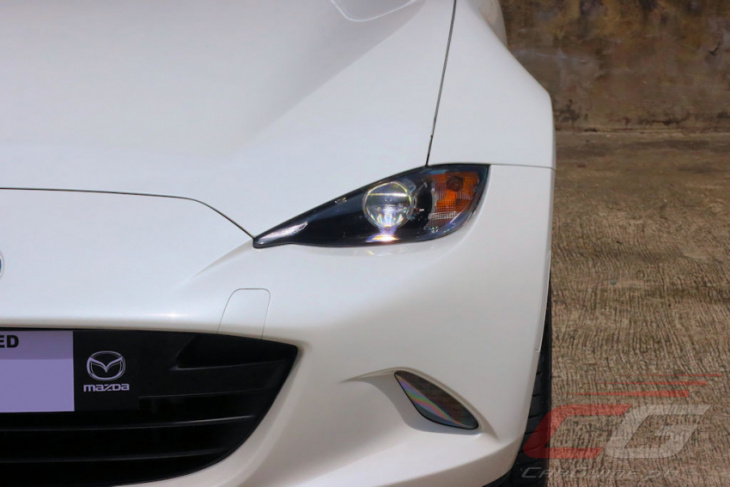 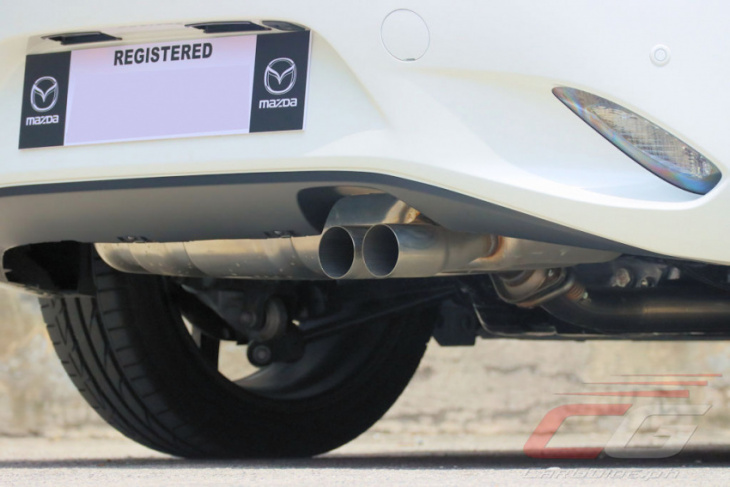 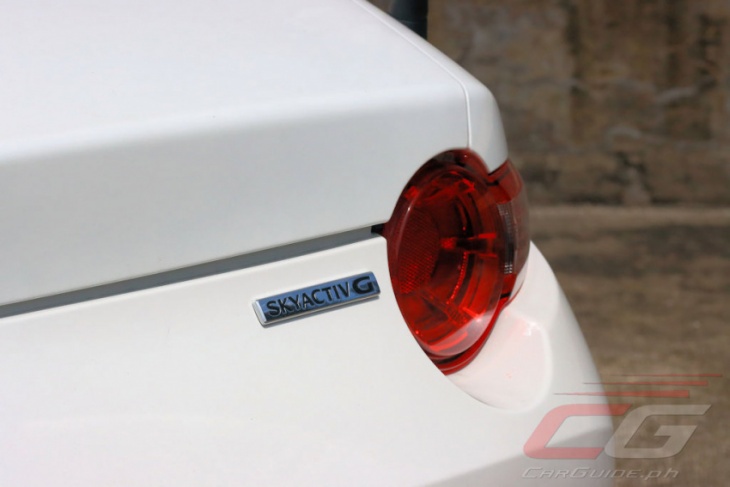 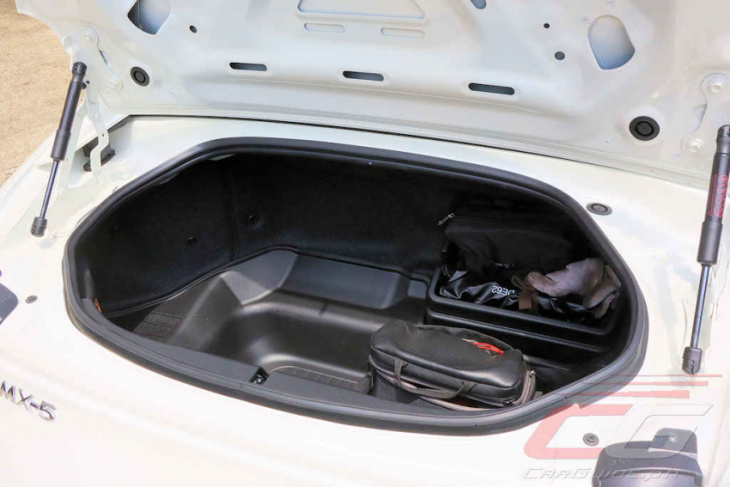 Upon returning the MX-5 RF to its owner, in retrospect, I wish I drove it more, or at least drove it through a route that wasn’t comprised mostly of straight-line highway driving or stop-and-go traffic. I wished I checked Accuweather for a window when the sun shone more. Regardless, I didn’t dwell too much on those things. Seat time in the MX-5 is always an experience, and it’s a reminder that its formula for thrills—lightweight, tossable, and approachable—remain timeless in an age of increasingly complex, computerized sportscars.