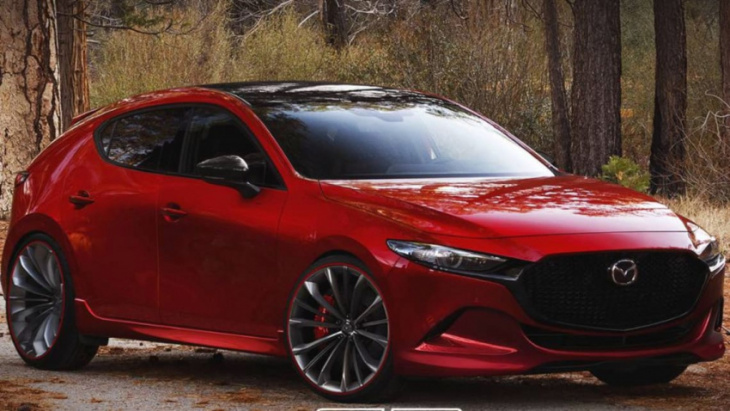 Mazda is investigating a proper performance-car program that could take on Toyota and it’s GR Corolla and GR Yaris, with the company’s Mazda Spirit Racing brand to act as an umbrella for sportier product.

The program, which is currently still under study, is investigating everything from performance accessories that largely change a vehicle’s appearance, to “significant changes to the vehicles”, as it looks to potentially tap the high-performance market.

That’s according to Yasuhiro Aoyama, Mazda’s Director and Senior Managing Executive Officer, who visited Australia for the launch of the new Mazda CX-60 plug-in hybrid SUV, which will officially launch in Australia next year.

Mr Aoyama told CarsGuide that an opportunity existed in the high-performance space, and the brand was still considering how to approach it.

“Now we are still investigating a lot of opportunity, because we also understand that the accessory opportunity that can give us a large profit, and there should exist the certain level customer that is waiting for that derivative,” he said.

Asked if future product would focus on accessories rather than a genuine change to vehicle performance (like Toyota has achieved with its GR program), Mr Aoyama said “significant changes to the vehicle we sell” were on the table.

“So we are investigating a lot of opportunities, so starting from accessory parts…to significant changes to the vehicle we sell, with the higher performance for the customer advantage. It’s under investigation as a part of Mazda Spirit Racing activities.”

Mazda Racing Spirit is the brand’s freshly launched motorsport business, tackling everything from digital racing to real-world endurance events in which the brand tests new biofuels.

It could end up similar, then, to Toyota’s Gazoo Racing, which has funnelled its motorsport know-how into a range of impressive performance-flavoured road cars.

The plans remain in their infancy, but one thing does appear certain, and that is that any new program wouldn’t include another former staple of the Mazda experience – a new RX model.

“That still belongs to many of our engineers as their passion so that we will keep the technology in the technological archive. But it’s not the appropriate time to resurrect the RX,” he said.

The Mazda6 is rated as one of the most reliable cars Why you can’t buy a new Mazda6 The most reliable Mazda can be a used car bargain with lots of standard features Best years of the Mazda6 No matter what they’re shopping for, everyone wants a car that ...


View more: The Most Reliable Mazda is the Only One Good for Over 200,000 Miles

Does the Mazda MX-30 have enough range for the average driver? The Mazda MX-30’s range is suitable for this type of driver Should you get a 2023 Mazda MX-30 EV? Mazda produces an electric SUV, but auto enthusiasts and critics have been less than enthusiastic about its capabilities. The ...