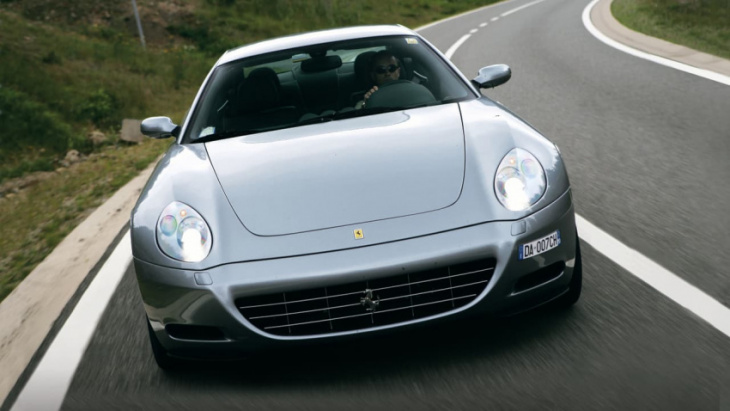 Temperance is getting on for an abstraction once you’ve made the mental commitment to shelling out for a new 612 Scaglietti. But before you go frittering the available budget on a paint job based on whatever sample you provide (£3,935), one ‘dedication plate’ in silver (£210), or indeed the six-piece leather travel set (£4,385), you might want to consider four letters: HGTC.

These four consonants make a big difference to the 612, and they should, since adding them to the order form also adds £15,675 to the 612 F1’s not inconsequential £181,225 list price. What you get for the cost of a decent new car is a package that squeezes a little more juice from your four-seat Scaglietti, in exactly the same way as we saw on the package that adorned later versions of the 575M.

So, the biggest and most visual of the changes are centred around the wheels. The HGTC package includes ‘ball-polished’ 19-inch rims with super-sticky sport tyres and gargantuan carbon-ceramic brake discs, gripped by ‘CCM system’ monoblock calipers. The other changes are harder to spot, consisting of a revised suspension ECU that helps the Scaglietti hunker down harder coupled with a reprogrammed F1 gearbox that chivvies the bytes to give it a shorter change. You also get a sports exhaust with bigger lungs and a noticeably more soulful soundtrack.

It works. Just as it did with the 575M HGTC. This Scaglietti feels honed rather than spoiled. The suspension immediately seems tauter, the gearchange appreciably more snappy. There is more grip in every situation thanks to the suspension and tyre combination, as well as almost religious faith in a braking system that stops the car in violent style every time you decide to scrub some speed. The noise is worth a small sensory annexe all of its own. It really is impressive stuff, the big 612 slimming itself down thanks to a dynamic diet. It makes this already very fast GT a fun car to push, and that’s no mean trick.

Unfortunately, it isn’t all gravy. The polished wheels look tacky. The brakes, as awesome as they are, do the same thing as all other carbon-ceramics and squeak like mad when soft-stopping, which is embarrassing. Happily, the HGTS package covers everything without the big brake conversion and horrid wheels for £7,420 – so if it were my money I’d choose that and save a bit of cash. But it isn’t my money, so I’d put up with squeaky brakes and nasty wheels so that everyone would know I had the ultimate Scaglietti. Which, so far, this is.