This is surely a case of right car, wrong road. Or vice-versa. In fact, I can’t think of a single road in the south of France that might suit the Vauxhall VXR8, except perhaps the A8 autoroute. It certainly didn’t look or feel right rumbling along the sea-front at Cannes 30 minutes ago, and I can’t imagine it’s going to feel much more at home in the mountain-hugging hairpins that lie just ahead.

The VXR8 may be updated, but its attitude of unreconstructed blokishness means I don’t believe it’s changed that much. Likes a nice long straight, does the VXR8, a chance to open its pipes and stretch its long legs. It could never be powered by anything other than a V8, could it? It’s even bigger now, which is clearly a good thing, up from 5967cc to 6162cc. Instead of GM’s LS2 engine, it’s now the LS3 as fitted to the current Corvette, so gives a tad more power (now 425bhp instead of 411bhp), cleaner emissions (320g/km vs 365g/km) and the ability to travel slightly further on each gallon of fuel – as much as 20.4 miles if you’re gentle (we got 12mpg).

There’s also a new six-speed manual gearbox, uprated clutch and mechanical limited-slip differential to answer criticisms of the old car’s drivetrain shunt, plus the suspension now features Magnetic Ride Control (MRC) – the same adaptive damping technology as on the Audi R8 and Ferrari’s California. For an honest-to-goodness muscle car, this is cutting-edge stuff. There’s more tech inside too, principally the Enhanced Driver Interface (EDI). You know how the Nissan GT-R has a screen showing everything from turbo temperature to throttle angle? Well, this is the Aussie answer. There are various displays to flick through, but I come to a rest on the one that shows angles of oversteer and understeer. Hell, yeah. The fact it shows 12 degrees of slip as we trickle through Vence at walking pace means it can’t be trusted, but to be honest that’s just as well, otherwise I know I’ll find myself exiting tight corners with my eyes glued to the screen, not the road – and although I’d be shocked if the new VXR8 doesn’t slide with as much finesse as the old one, it would only be a matter of time before I found myself plunging down a nearby ravine.

And besides, my attention is being diverted by a car that seems much more together than I remember. The old VXR8 vanished from price lists in 2009, but I well remember the loose, vague steering where each corner required two stabs at the wheel – once for confidence, twice for line – and the suspension’s shaky control. It all added up to a rather woolly driving experience.

The basic recipe hasn’t changed one iota, but you quickly get the feeling that Holden’s engineers have been hard at work under the skin tightening up a fair few bolts. We’ve thumped over loads of speed humps on our climb up from the coast, and all have been well cushioned by the suspension – no jiggle, no sag, and only on a couple of occasions did the dampers need a second attempt at stopping rear-end bounce.

That level of control bodes well for handling, yet I still fear for the big Vauxhall up here. These are tight, narrow roads, better suited to hot hatches than a super saloon that with two of us in it and a boot-load of gear must weigh over two tonnes and is nigh-on two metres wide.

The first thing that becomes clear is that this still isn’t a super-sharp, ultra-honed BMW M3 rival. If I had to choose a word for its behaviour, it certainly wouldn’t be ‘darty’ or ‘explosive’. No, ‘meaty’ fits the bill much better. It feels lazier, more measured – a sports saloon in the same way that a Bentley is a sports saloon, toughing out corners so it can thump down straights. 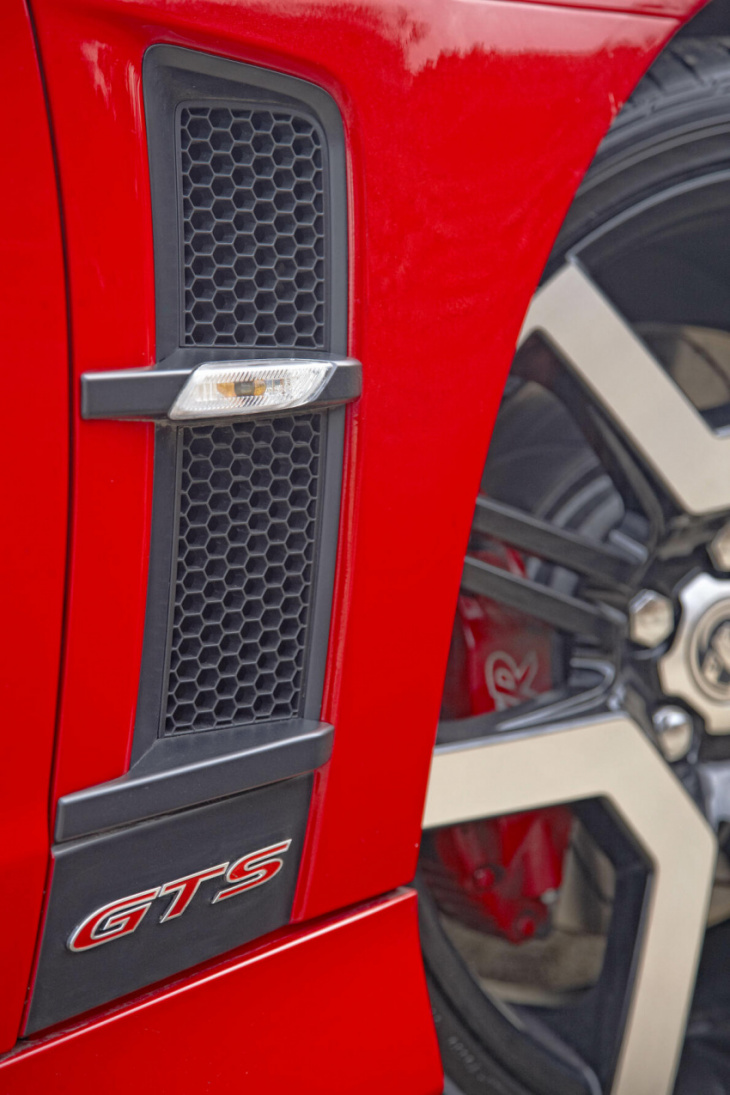 But it can now be guided more accurately. The steering is more responsive, and where the old car would turn in and instantly sag through an inch of suspension travel, the new one rolls less and feels more tightly sprung. There’s far less delay and slop in the system, so you’re more connected to what’s going on. And that’s without switching the MRC dampers from Sport to their harder Track mode. Not that you shouldn’t. In fact, we’d recommend that as the better setting – the difference is only small, but it doesn’t mess with the ride quality and enhances traction.

Speaking of which, don’t expect mega tyre grip. Go into a switchback too hot, and the laws of physics that govern heavy saloons dictate that understeer will occur. In faster corners, it’s less noticeable and more sortable with a dose of throttle, but outright grip isn’t the VXR8’s forte.

This means it’s worth going for the stability control’s middle Competitive setting, which allows a bit of slip but gathers things up before your heart rate spikes nastily. Left alone, the traction watches your every move like a hawk, giving you an electronic slap for the most minor misdemeanours.

Get all the settings where you want them, realise you can’t force the VXR8 to be something it isn’t (a BMW M3), and it’s a genuinely engaging tool, gushing from corner to corner and leaving you in no doubt that there’s a little more power than grip, so you ought to be circumspect with the throttle.

Ah yes, the engine. Not many people still build proper big banger V8s and those that do don’t tend to send them to the UK. It rumbles away at tickover, and if you blip the throttle, there’s a fat flare of revs. At that point, you already know pretty well how it’s going to behave. This is not an engine that zips through the rev range, screaming to a 8,500rpm limiter. No, play is stopped 2,000rpm earlier, and on its way to that point, you’ll have got the following: effortless torque, white noise, a good plump mid-range and proper power above 4,000rpm. The white noise? Between 1,800 and 2,000rpm, the engine note seems to bypass your ears and meet right in the middle of your head.

It’s a lugger, this LS3 – if I’m honest, I’d like it to bellow and snarl a bit more, but it really gets its shoulder behind things. Third gear is all I need around here, dealing with every eventuality from 0 to 90mph. You can come down to second, and it’s worth it for the top-end shove out of hairpins, but then you have to use the gearlever…

OK, so the manual shift isn’t anywhere near as ponderous as it used to be, but it hasn’t got the fastest of actions, which means each lunge at the horizon is punctuated by pregnant pauses as you clunk-clunk into the next gear. But at least it’s got a manual – they’re rapidly becoming a rarity these days, and the drivetrain shunt which used to put drivers in mind of a railway sidings has been all but eradicated.

What of the rest of the car? It’s well packaged – by which I mean the generous exterior dimensions are reflected in the vast boot and rear seats. And also the driving environment. Does a steering wheel need to be this big? Did the seats have to be designed around a 20-stoner? I sloshed around in them, although my biggest criticism of them is that they’re mounted too high.

Design and quality? Not cutting-edge, but won’t put you off either – unlike the overdone bodywork. Sorry, but the front end with the chrome pencil moustache, black bonnet vents, ‘Shockwave’ grille and LED strips is just plain garish.

£50,000 cars shouldn’t look like they’ve dressed up for a Southend cruise. Yes, Ã‚Â£50,000 – oh alright, Ã‚Â£49,500 – is the best part of Ã‚Â£15,000 more than the old model and brings this level-pegging with some mighty talented opposition – the inevitable M3 is one, but also the Merc C63 AMG, Lexus IS-F et al. Exchange rates are to blame and probably also explain why Vauxhall isn’t expecting to sell more than 25 of these a year. But we’re very glad they are. The car world would be a poorer place without the Vauxhall VXR8.