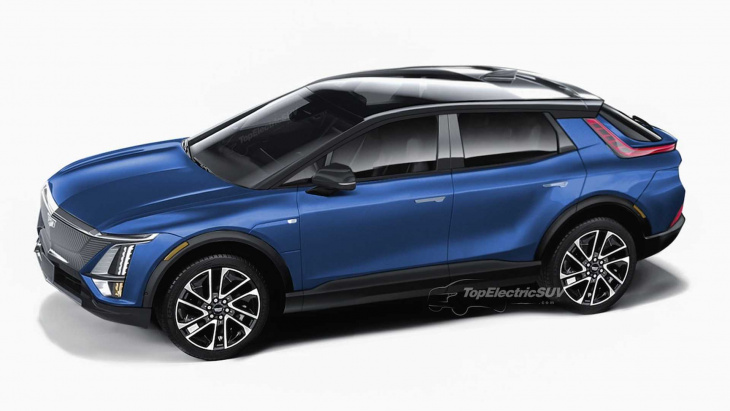 Will it look like a slightly smaller Lyriq or is Cadillac preparing a much more daring design?

Cadillac recently revealed the $300,000+ Celestiq electric sedan, the American luxury automaker’s attempt to offer a rival to the world’s most exclusive sedans, from the likes of Rolls-Royce or Bentley. Below it sits the far more attainable Lyriq (which starts at $62,990), but it won’t be the smallest EV to wear a Cadillac badge and a recent teaser from General Motors gave us a glimpse of what a sub-Lyriq electric crossover might look like.

GM Design shared the design sketch on Instagram without directly saying what it represented. They don’t even say it’s a Cadillac, although this is plainly obvious if you compare the sketch to the Lyriq that it appears hewn from the same block, with the same family look and overall shape.

The still unnamed smaller Cadillac crossover will be roughly the same size as the Chevrolet Equinox EV, and it will be built on a version of the same platform, although it may have more performance and different specs, so the two won’t be technically identical. Analyzing the design sUS: First 36 Cadillac Lyriq Were Delivered To Customers In Q3ketch, the model it previews will definitely be a bit sportier looking than the Lyriq, with a more aggressive shape and details than its bigger brother.

TopElectricSUV produced this rendering which tries to preview the model, although we don’t think it will actually look like this. Frankly, it just looks like a smaller Lyriq, and Cadillac will not go down that path, as the aforementioned design sketch seems to suggest, even if said sketch doesn’t actually preview the production model.

If, however, Cadillac does choose to just shrink the Lyriq and give it minor detail changes to create the smaller model, well, this rendering is spot on. And since it is expected to be mechanically related to the Equinox EV, it will probably have similar proportions, wheelbase, battery pack size and level of interior room.

2024 Cadillac Lyriq Gets Cheaper Base Trim, Fewer Features And Options

Some say Tesla started a price war in the EV segment, and now GM is following Ford by following suit.

Fleetwood Cadillac Models & History 1964 The1964 Sixty-Special Fleetwood sedan had the new styling features combined with carryover trims. Standard equipment was the same as the previous year. I. D. NUMBERS Motor serial numbers took the same form used in 1963 the first pair of symbols changed to “64” to ...

Eldorado Cadillac Models & History 1971 he bigger V-8 of 1970 hinted that a bigger Eldo was on the way. But though the mostly new 1971 edition was 6.3 inches longer between wheel centers, it was just 0.6-inch longer overall and only some 75 pounds heavier. Even so, the more ...

1958 El  Dorado. The El Dorado was considered a luxury car by Cadillac and near the top of the line.

Fleetwood Cadillac Moels & History 1985 FLEETWOOD BROUGHAM – SERIES 6D Brougham, the last surviving rear-drive Cadillac, changed little for 1985 and faced potential extinction in spite of increased sales. That didn’t happen. The traditional rear-drive lingered on for several more years, even though all other Caddies (including limos) ...

Skip these Cadillac models Cadillac CTS  Cadillac XT4 What are some reliable models from the luxury brand? Cadillac has a long-standing reputation for producing luxury cars unequaled by any American-based automaker. Given the price point, it seems logical that Cadillac would also make reliable luxury cars. However, while there ...

2024 Cadillac Lyriq To Get Real Leather Interior And New Colors