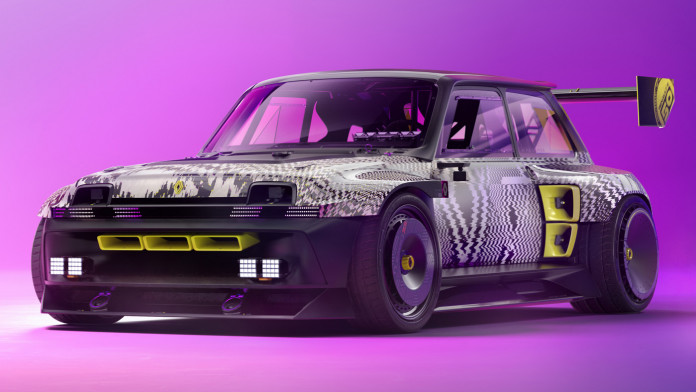 Renault is probably the best company when it comes to making wild hot hatches. And this time around, they’ve cranked things up to eleven with the R5 Turbo 3E show car which is a homage to the original Renault 5 Turbo and Turbo 2.

The R5 Turbo 3E is set premiere at the Chantilly Arts & Elegance 2022 contest. It will also be on display on Renault’s stand at the 2022 Paris Motor Show from October 17 to 23.

Looking like the next car for a Hoonigan Gymkhana video, the R5 Turbo 3E is a legit drift car. Oh, it is also fully electric, with two electric motors powering each rear wheel. Combined, both electric motors produce a total of 380 hp and 700 Nm and the R5 Turbo 3E accelerates from 0-100 km/h in 3.5 seconds. In the centre of the car is a 42-kWh battery pack.

Inspired by games and the digital world, you must press the “Free Play” button on the centre console to start the car. The driving modes include “Turbo” (for drifting), “Track Invader” (for playing), and “Donut” (for 360° spins). Accommodating the generation that records just about everything, the R5 Turbo 3E comes with 10 or so mounting brackets for cameras inside and outside.

On the outside, the R5 presents a “playful” appearance despite its rather sinister and muscular nature. Retaining the same shape for the bonnet, doors, and cockpit as its predecessors, the R5 Turbo 3E’s parts are mainly made of carbon fibre.

Renault Design Director, Gilles Vidal said, “The R5 Turbo 3E combines ultra-tech design and wilfully exuberance with numerous references to the world of car racing and video games. This combination propels the show car into modernity and technology, and it is at the frontier between the real and virtual realms. This pure electric “drifter” demonstrates that electric cars can also be fun with incredible performance!”

Large inlets at the front bumper cool the engine and add downforce. Around the car are LED strips in pink, blue, and yellow which flash when the car drifts, producing a retro videogame vibe. Renault says the R5 Turbo 3E hints at its history by employing a design that is opposite of nostalgic.

One easter egg on the R5 Turbo 3E is the air inlet on the bonnet that pays tribute to the Renault 5 Turbo 2. It houses the opening for the battery charging socket. The square fog lights are reminiscent of the original Renault 5 Turbo and the see-through parts of the body provide windows to admire the show car’s electric mechanism.

Inside, the R5 Turbo 3E has carbon fibre racing bucket seats, safety harnesses, and a steering wheel that is the result of teamwork with Sabelt. Naturally for a drift car, a large upright handbrake lever dominates the centre console. Ten digital screens sit on the dashboard and the dashboard itself look a lot like Pixel Art and Glitch Art.

Largely inspired by videogames and the digital world, a collection of Non-Fungible Tokens (NFTs) around the R5 Turbo 3E will be available. Those who own the NFTs will be offered exclusive advantages and rewards. And before you think it only exists in the digital realm, we’d like to remind you that the R5 Turbo 3E is an actual physical show car that will premiere soon.

Keyword: Renault’s R5 Turbo 3E is an electric drift car that you can “buy” but not quite drive