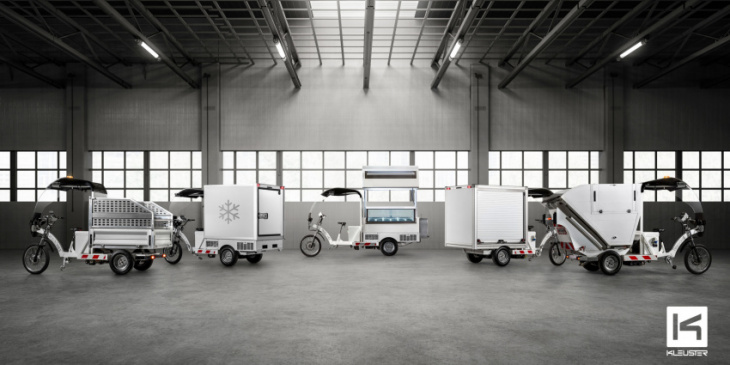 Renault Trucks is taking a holistic approach to logistics as the French commercial vehicle maker strikes a curious partnership. The company has joined forces with Kleuster, a Lyon-based e-bike manufacturer, to accelerate the production and distribution of e-cargo bikes.

Renault Trucks says both companies were driven by the same mission to decarbonise professional mobility. In Renault’s case, Kleuster adds a last-mile delivery option to the company’s growing zero-emission portfolio.

Built on a single-body chassis, Freegônes offers five modules (dry box, refrigerated box, food service, flat bin, and refuse skip). The latter can automatically unload into a tipper truck or container in less than 20 seconds. The e-cargo bikes all come with a range of 80 km.

As for Kleuster, the company receives access to Reanult’s large-scale production capacity at its Vénissieux plant. Their Freegônes’ assembly and logistics have moved to a 2,100 m2 building on-site. Renault Trucks expects to increase the output of e-cargo bikes fivefold in “the very short term” compared to 2022.

Currently, no more than 200 Kleuster Freegônes pedelecs are pedalling around France. However, Renault adds its new partner was bringing “an active portfolio of key accounts working primarily in last-mile delivery” with some commercial ties on both sides. Véolia, Intermarché, Leclerc Drive, Lime, Cityscoot, or Métropole de Lyon have already tested or used the bikes, says Kleuster.

Renault Trucks will also start selling e-cargo bikes through its distribution network immediately in France and Europe in 2023.

The company claims it was now the only European manufacturer with a wide range of electric vehicles, varying between 650 kg and 44 t GVWR.

“Freegônes take over where trucks stop,” so Renault. “Through this partnership with Kleuster, Renault Trucks is differentiating itself and taking the lead in offering even better solutions to our current and future clients,” added Bruno Blin, President of Renault Trucks.

It is, however, not the first time Renault has looked into last-mile logistics. In May this year, the company showed a multi-modal concept that combined a Master ZE van with a Bullit e-cargo bike and a drone to drop off parcels.


View more: Einride collects half a billion in funding

Customcells has raised 60 million euros in a Series A financing round. The German battery cell manufacturer intends to use the money to expand its activities in the electrification of air traffic, intensify research and development and drive forward internationalisation. Customcells has been manufacturing cells for special applications for ...


View more: Customcells raises €60 million in Series A financing round

India became the fifth largest market for the brand after France, Germany, Russia and Brazil in 2022. Renault India has announced that it will increase the prices of its models from January 2023. Renault hasn’t revealed the exact quantum of the price hike, but, as with other carmakers, prices ...


View more: Renault to hike prices of its cars from January 2023

In a dossier on its website, Volkswagen has now officially confirmed details of the MEB+, the planned enhanced version of its MEB electric car kit. The MEB+ will use the new unit cell – for more range and shorter charging times. Specifically, VW is talking about ranges of up ...


View more: VW to boost range and charging performance for the MEB+

The initiative encourages submissions of promising electric vehicle (EV) innovations The winning ideas will share £20m of funding Previous winners include pop-up chargers that rise up out of the pavement for those without off-street parking The Government has launched a research and development competition for new technology that will ...