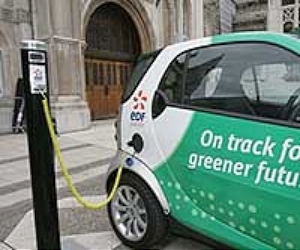 The flagship division of its revamp, electric vehicle and software entity Ampere, was being prepared for an initial public offering on the Euronext Paris in the latter half of next year at the earliest, it said in a statement.

The new entity will employ around 10,000 staff in France and produce the R5 and 4L electric vehicles in the north of the country, the car maker said as it outlined the revamp for investors.

The electric vehicle market is expected to grow rapidly in response to consumers’ worries about climate change, putting pressure on manufacturers to develop less polluting products.

The European Union last month agreed to phase out new CO2-emitting vehicles by 2035, a move set to turbo-charge the production of electric prototypes on the continent.

Renault said it plans to invite investment in Ampere but would remain the majority shareholder with “the support of potential strategic cornerstone investors”.

Renault also intends to combine its technological, manufacturing and research and development activities for its hybrid and internal-combustion vehicles with Chinese automaker Geely in a new entity, “Horse”.

The groups will share the division to design, develop, produce and sell components and systems for hybrid and internal-combustion vehicles, employing 19,000 people across Europe, China and South America.

In 2020, Renault suffered a historic loss and its recovery was destabilised by its withdrawal from Russia following Moscow’s invasion of Ukraine.

The value of traditional car manufacturers pales in comparison to new players on the market specialising in electric vehicles such as Elon Musk’s Tesla or Chinese firm BYD.

Renault still needs large investment to accelerate its electric transformation according to plans it presented in 2020.

US giant Ford has taken similar steps, announcing the creation of the “Ford Model E” earlier this year.

The announcement comes as the sales of traditional internal-combustion vehicles fall.

In the first nine months of 2022, hybrid and electric vehicles represented 38 percent of the brand’s registrations in Europe, a year-on-year increase of 12 percent.

The separation of Renault’s activities has concerned trade unions after several waves of job cuts.

Investors on Monday expressed their interest in Renault’s transformation, with the group’s stock value climbing 3.77 percent on the Paris stock market.

Looking to beat the scary-looking fuel prices? The Renault Captur may be able to help. Here are some great deals on diesel models. Petrol or diesel – that is the question! And with fuel prices rising the way they are, local consumers are getting more and more cash-strapped. If your ...

What’s new Renault Trafic Panel Van Renault has revealed a new Trafic Panel Van for South Africa which will retail from R599,999. The fourth generation of Renault’s commercial offering features a restyled front fascia, an updated cabin with a “connected mobile office”, a new colour, and a more powerful ...